Let’s set the record straight since the very beginning: I’ve never been a KISS follower and I had never seen them playing live ever before. For many readers (like my good friend and lifelong fan Keith Johnson) this probably sounds like the ultimate heresy. Why on Earth someone like me is daring to document one of the shows of the End of The Road Farewell Tour of the best marketed – and also one of the best-selling – bands in rock n’ roll history? Well, my simple answer would be: I think it gives me the ability to write a completely unbiased chronicle, stripped down of any fan-induced drooling. So let’s get down to business, shall we? 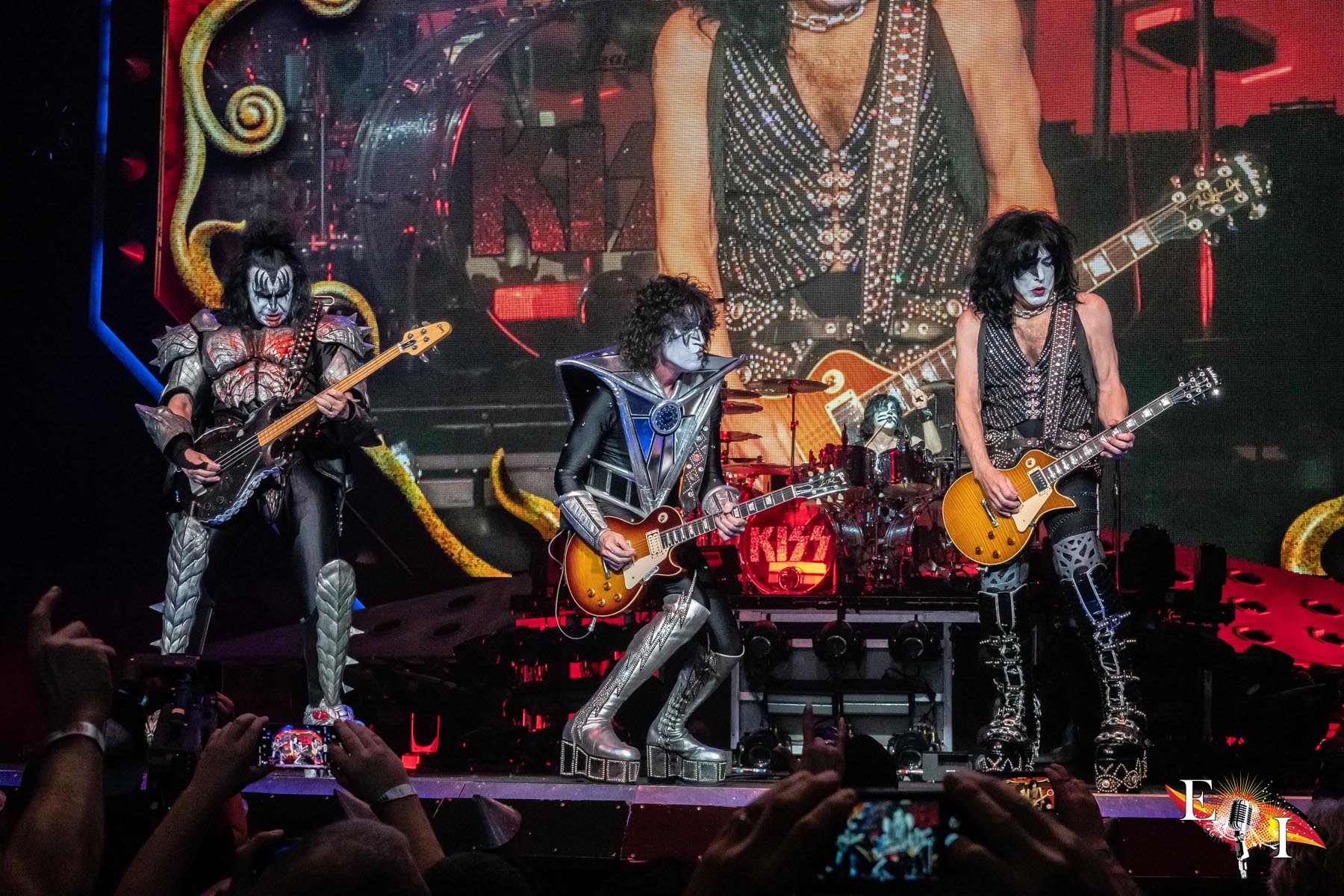 The Demon, The Spaceman and The Starchild

KISS’s greatest and certainly undeniable gift to their faithful legions of fans has been their ostensibly omnipresent presence on stages worldwide, ever since their breakthrough live album Alive! hit the shelves in 1975 (I was only 2 years old). Now, after 46 years of musical debauchery, the foursome which essentially invented the concept of “putting a show” are trekking one last time, offering to millions of ardent admirers the chance for a final KISS. And boy, what a spectacle that one is. 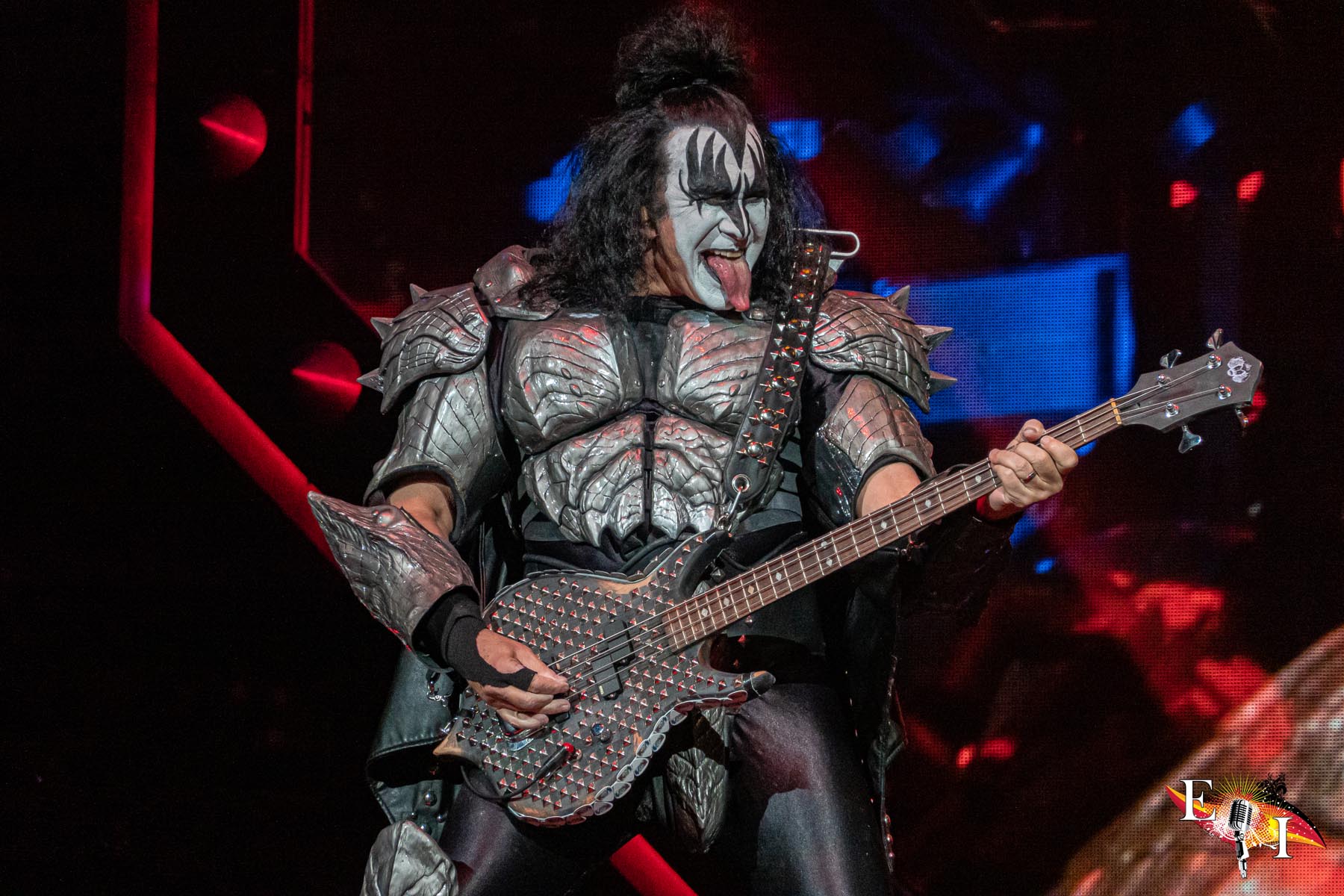 As the opening notes of Zeppelin’s “Rock And Roll” escaped from the PA system, a deafening roar emanated from the “dressed to rock ‘n’ roll all nite” crowd, kept in suspense until the last minute by a large black banner with the band’s logo on it. The fall of the curtain was the beginning of a theatrically spectacular production like probably no spirit in attendance has ever seen before. Descending from 20 meters above the stage in hydraulic platforms amidst sparks, pyro and smoke, Simmons, Stanley, Thayer and Singer opened the floodgates of an all-guns-blazing, over-the-top, ludicrous-rock extravaganza of exponential magnitude, one that arguably go down in the personal history of thousands in attendance as the most badass concert of their lives. 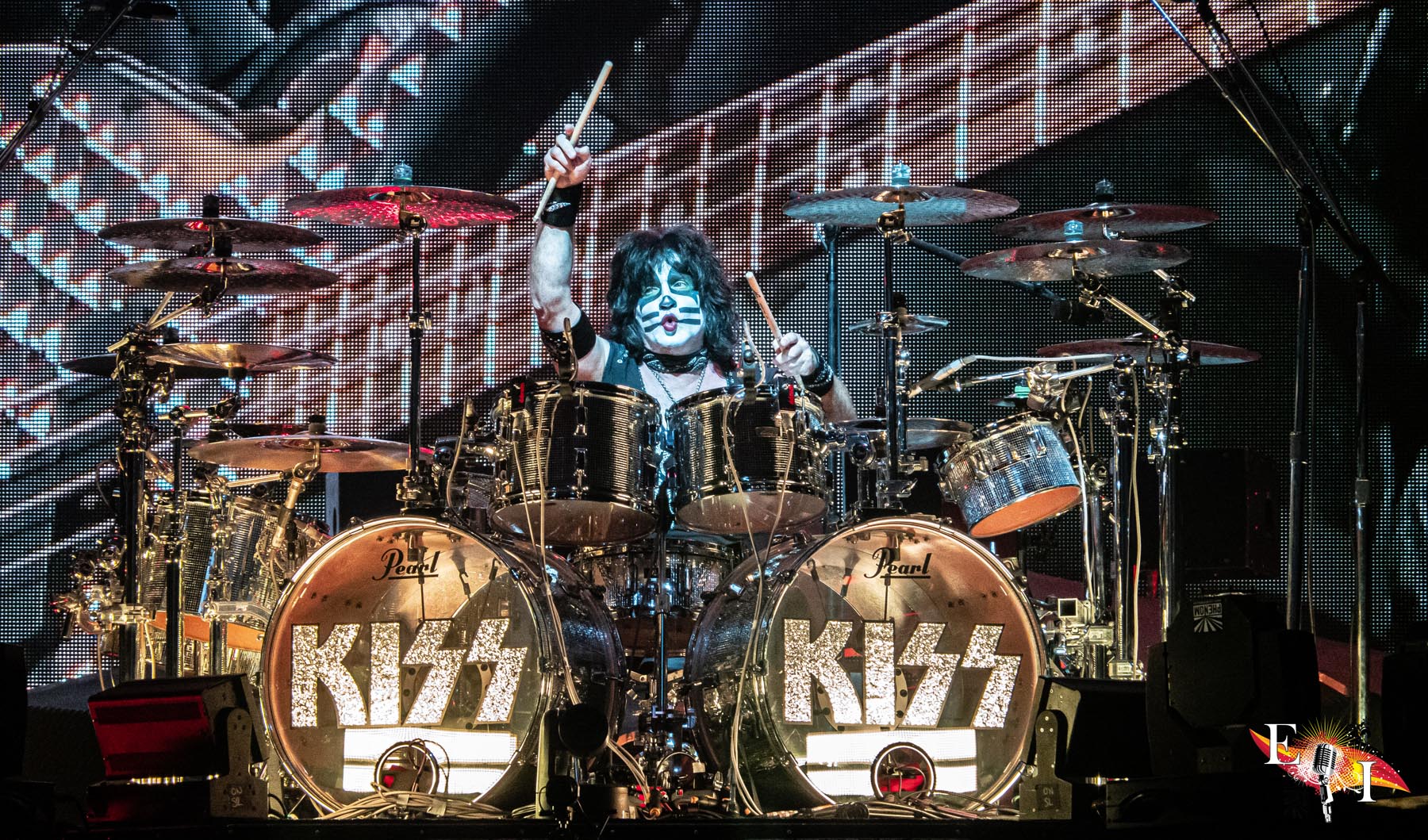 Nearly every moment of the show was packed with eye-catching situations: lasers, pyrotechnics, fireworks, smoke, confetti and bubbles, all deployed in front of massive video screens. Blasting through a set of 22 songs, there was no shortage of noteworthy moments: Stanley spun overhead the frenzied hordes in a flying harness to reach an elevated podium by the mixing console during “Love Gun” and “I Was Made for Lovin’ You”. Simmons breathed fire during “War Machine,” oozed fake blood in a truly demonic manner at the beginning of “God of Thunder” to later take flight to the ceiling of the arena, and frequently licked his bass using his famously and otherworldly long tongue. Meanwhile Thayer fired laser missiles from his guitar’s headstock – in the best Spaceman fashion – “destroying” the hexagonal screen hanging over the stage; and traded lick with Stanley on a snippet of Who’s “Won’t Get Fooled Again” during “Lick it Up” and Singer played a particular drum solo during “100,000 Years” which wisely focused more in entertainment and engagement with the audience than in showing off drumming skills. Arguably the most charismatic of the four, Stanley frequently commanded the pace and stole the spotlight, playing between his legs, pointing at the fans and addressing them with gracious and natural banter. 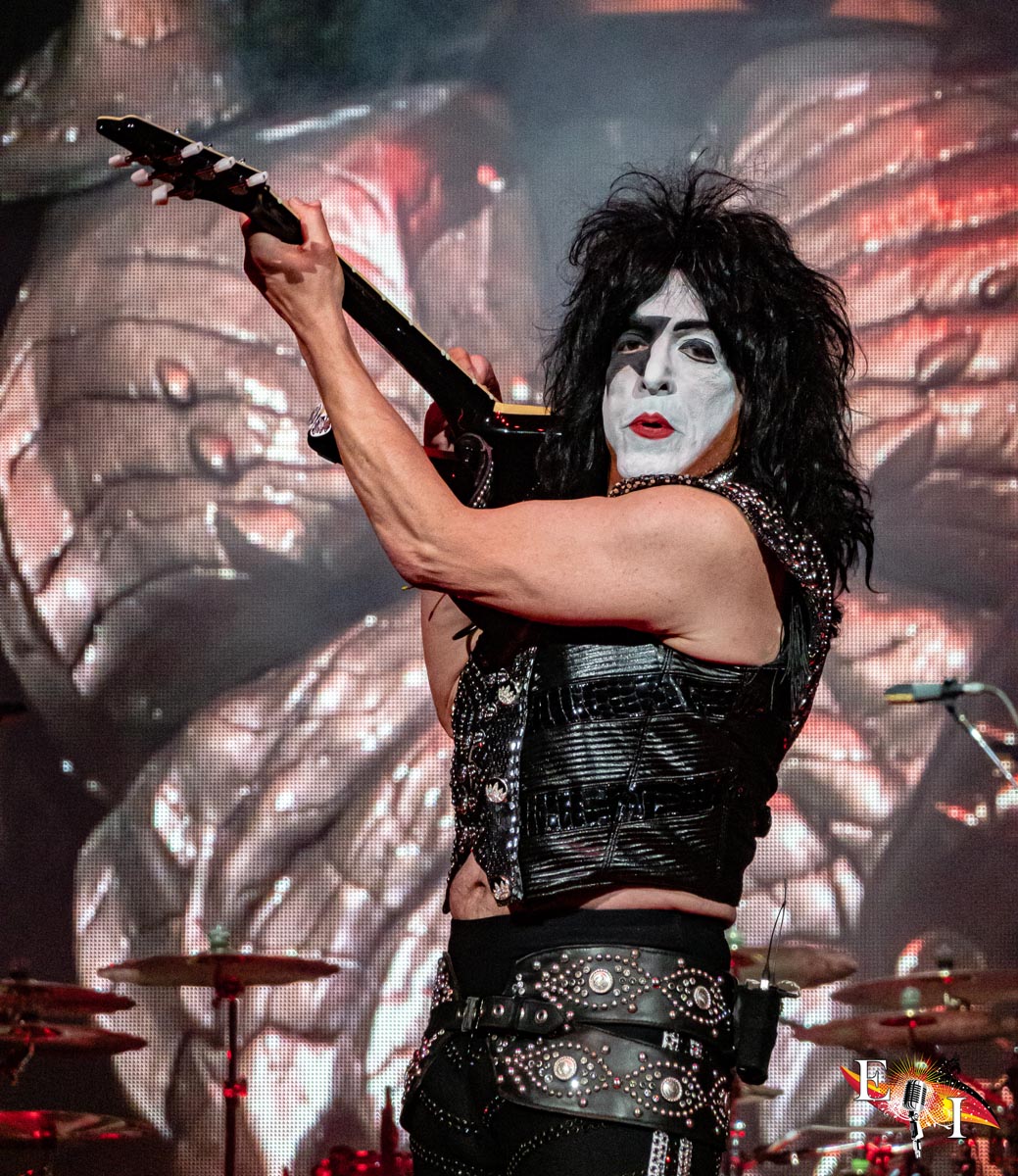 The four songs encore – including Singer‘s lovely interpretation of the iconic “Beth” at the piano – ended up in a with a trouncing rendition of “Detroit Rock City,” unleashing a final shock-and-awe detonation of pyrotechnics and confetti over the gleaming-of-joy heads of moved and grateful fans.  KISS’ music hasn’t changed much since the mid-seventies, and the “KISS Army” of fans of all-ages need nothing different. With Simmons and Stanley reaching their personal calendars 7th decade, the band still navigates a morphing concert landscape with an indisputable and memorable degree of show-business flamboyance. In recent years defined by the affluence of farewell tours from artists like Elton John, Peter Frampton and Bob Seger, KISS has managed to stage the biggest blowout in their notorious musical history. It was probably the last KISS Florida will ever get, yet it tasted as sweet and unforgettable as our first ever KISS. 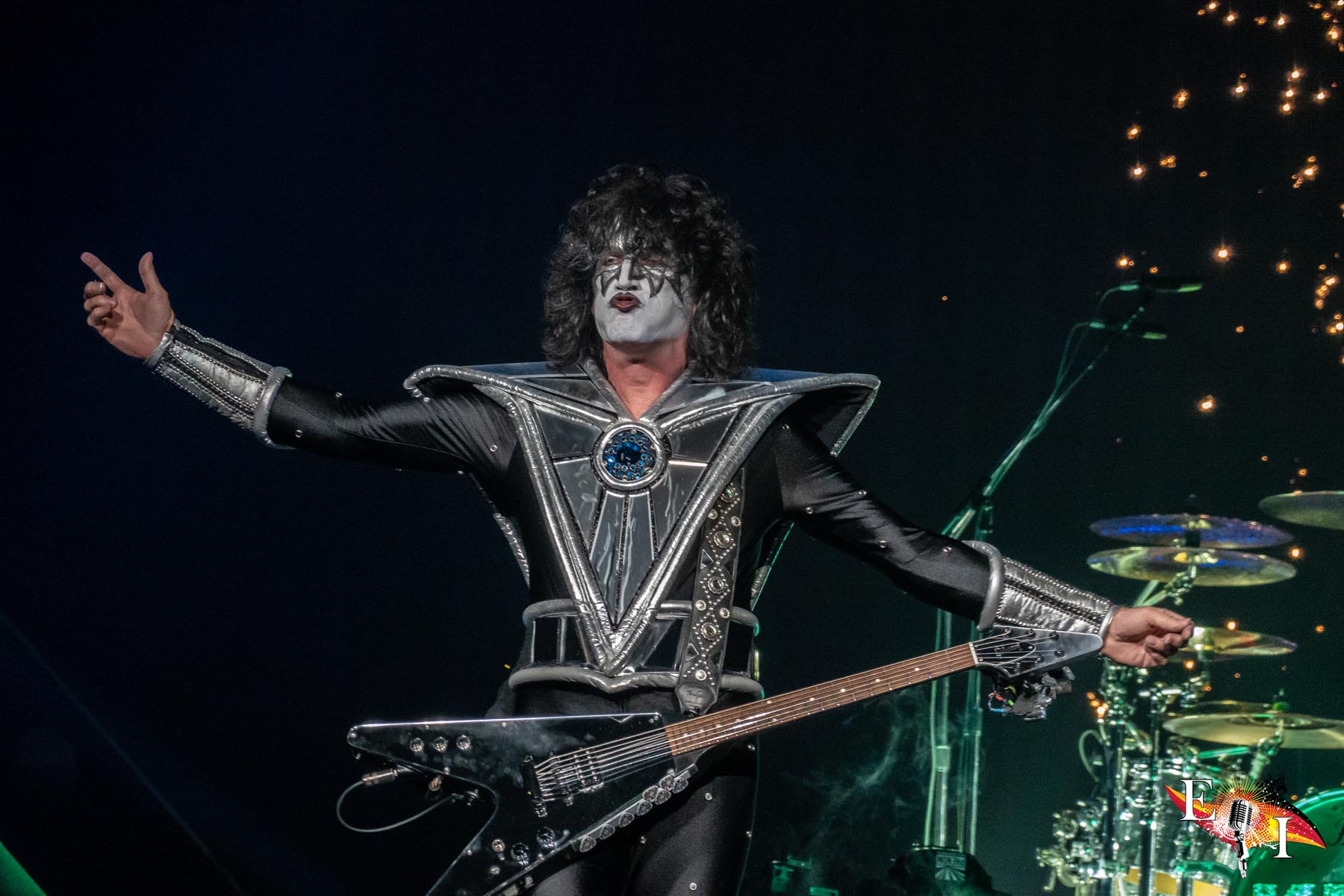 Rock and Roll (Led Zeppelin song played over PA) / Detroit Rock City / Shout It Out Loud / Deuce / Say Yeah / I Love It Loud / Heaven’s on Fire / War Machine (Gene breathes fire) / Lick It Up (with “Won’t Get Fooled Again” by The Who snippet) / Calling Dr. Love / 100,000 Years (with drum solo) / Cold Gin (with Tommy Thayer guitar solo) / God of Thunder (with bass solo) / Psycho Circus / Let Me Go, Rock ‘N’ Roll (with bass and guitar solo, Paul and Gene together with Tommy) / Love Gun (Paul on stage in crowd) / I Was Made for Lovin’ You (Paul on stage in crowd) / Black Diamond