Those of us living in the southernmost area of the United States don’t have the “luxury” of enjoying a whole lot of heavy metal concerts, therefore when a Swedish double feature of HammerFall and Sabaton comes to town, you certainly make your way to the venue, regardless of traffic and the omnipresent humidity and heat.

Revolution Live exhibited one of its most packed nights by the time HammerFall made their appearance on stage. Reaping the success of their recently released album “Dominion”, the quintet commanded by Joacim Cans surely master the craft of putting out a killer show each time, every time. A no-frills, unadulterated and anthemic heavy-metal act, when they hit the stage you can feel the oomph shift in the venue and ever fan’s eyes glued to the stage. With the crowd singing along in some sort of stupor – an enthralling metal-infused spell – their 11-long opening set was certainly flawless, even when it felt shorter than it really was. Musically they fired on all cylinders, and the enthusiasm they exude as a collective is beyond remarkable. Joacim Cans ever impressing vocal delivery, Pontus Norgren and Oscar Dronjak tandem of addictive guitar riffs and incessant head-banging, Fredrik Larsson walloping bass lines and David Wallin backbone rhythm structures and double-kick drumming undoubtedly made it for an authentic heavy-metal fest with a strong traditional touch, one that transported the audience to an alternate dimension of medieval warriors, rape and pillage, glory and honor. They closed with their anthemic single “(We Make) Sweden Rock” and put the last nail in the coffin with an incendiary rendition of “Hearts on Fire”. 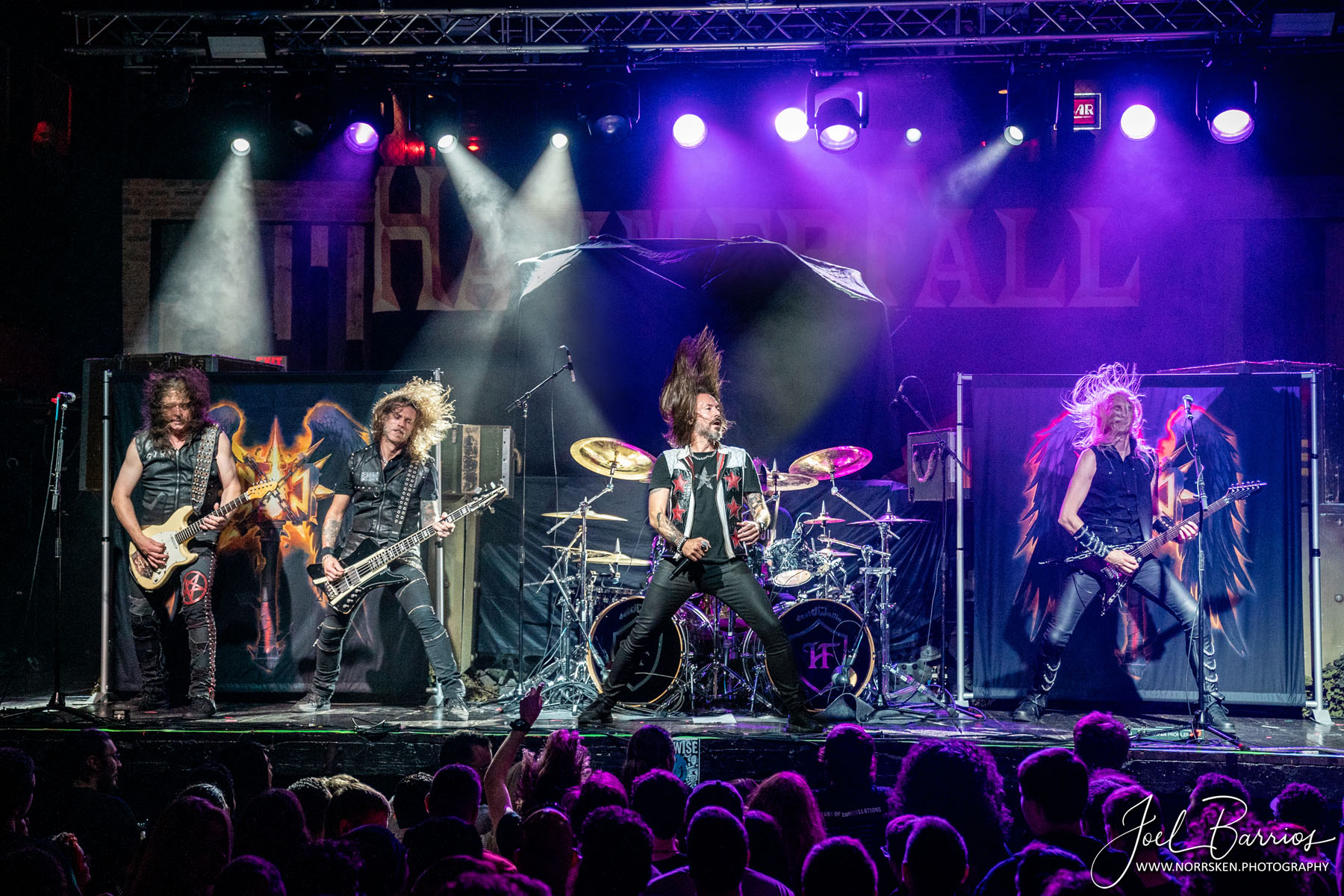 HammerFall bringing the Swedish hammer down at Revolution Live

Chants of the band’s name resonated throughout the venue, as ardent fans anticipated the arrival of the power-metal giants Sabaton. Their new stage setup includes an almost complete war tank, with the drum-kit seating on top, you can’t be more war-induced than that. The background screen illuminated with animated battlefield scenes rolling around, and suddenly the band took the stage with their usual opening salvo “Ghost Division.” It really is a blissful moment when these five guys show up in front of their fans; their energy and how much the band seem to enjoy themselves while performing is truly noteworthy.

The house was bouncing, cheering, and crowd surfing with the fearless metal offering of a perfectly put-together set-list to cover all major points in the band’s history, obviously including a few nods to their last album “The Great War”. Pär Sundström’s utterly infectious smile, Joakim Broden’s magical levitating/fist pump combos, and guitarists Tommy Johansson and Chris Rorland’s synchronized guitar ballet always make for a delightful experience. Each member wore massive smiles, played cheeky tricks on each other, and Broden’s trademark high-energy antics paired with his thick and powerful vocals and his unapologetically fun attitude made him the man of the night. The multitude response was so unanimous and enthusiastic track after track, that Joakim couldn’t contain his surprise and smiled constantly. A very sweet moment happened close to the end, when he spotted a young kid in the crowd and invited him on stage. The boy named Carl told him he was 8 years old and Joakim took out his landmark sunglasses and gave them to him as a gift, along with some guitar picks and a drumstick. As the kiddo returned back to his place by his father, the audience erupted in cheers. 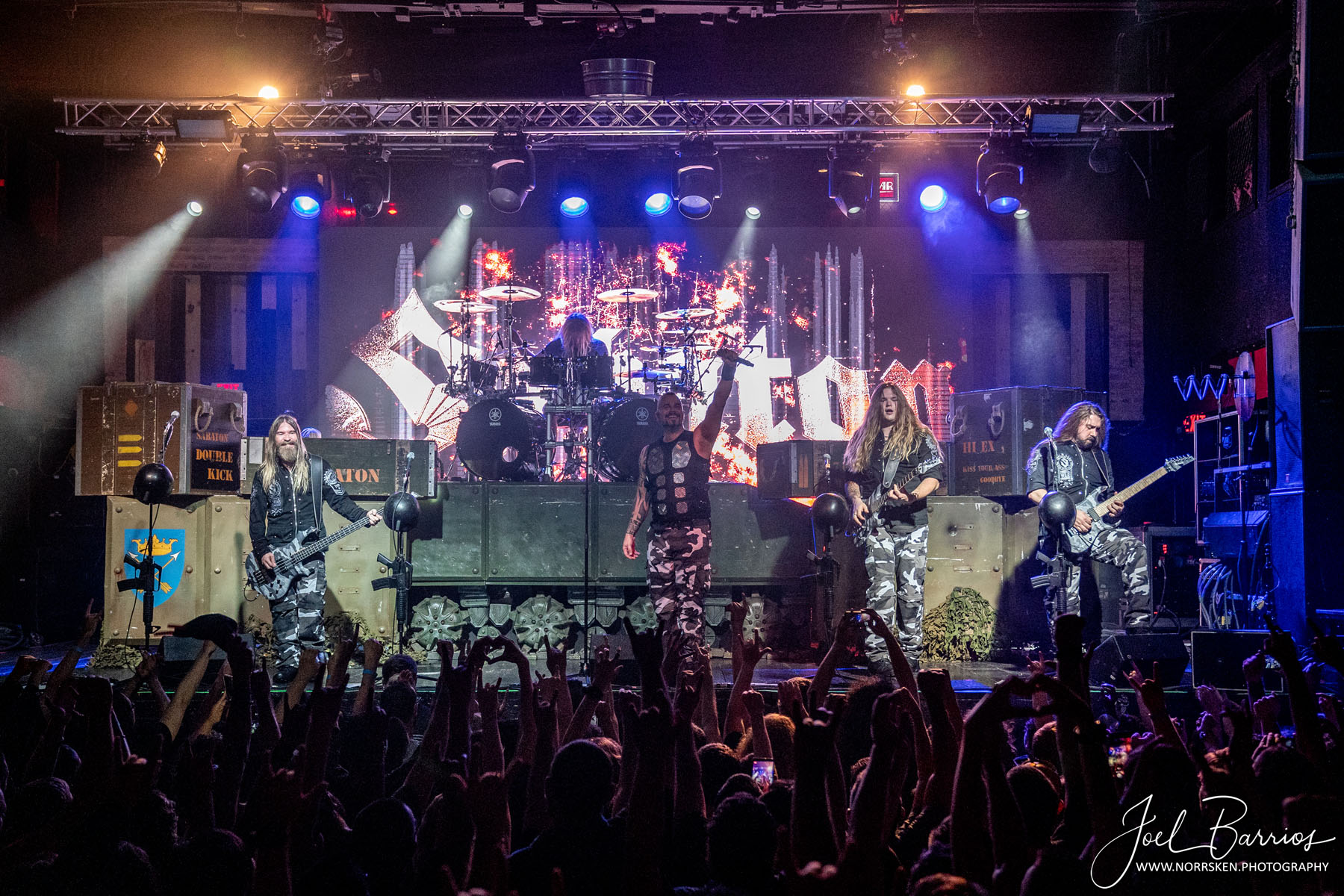 The warheads are on with Sabaton on stage!

I firmly believe the fans would have stayed all night and listened to every track Sabaton ever recorded if they could have…  when Joakim announced the coming of the encores a massive booing elevated from every single throat, despite they had played 15 songs already. While energetic chants of “Sabaton!, Sabaton!” incessantly filled the air and reverberated throughout the venue, they closed the proceedings with a three-songs overpowering encore of true war-ensemble anthems: “Primo Victoria”, “Swedish Pagans” and “To Hell and Back”. The look of pure euphoria on the frenziedly and sweated fans’ faces was unequivocally priceless as they clapped and screamed while the band vowed goodbye.

These two bands are amidst their North American tour which extends until the beginning of November, do not miss them if they come to a city near you! Long live Swedish metal!

Primo Victoria / Swedish Pagans / To Hell and Back