Onward to the misty mountains cold!

The background regarding Italy’s latest purveyor of Folksy power metal exploits set to a Tolkien lyrical gloss Wind Rose is a fairly unique one. Coming into being at the tail-end of the last decade and being at the forefront of what could be dubbed a third wave of European power metal after a few years of the style intermingling with 80s AOR, they originally set their sights towards a more progressive expression that sought to bridge the technical extravaganzas of Symphony X with a combination of Blind Guardian-inspired epic storytelling and a somewhat more folksy take on Rhapsody Of Fire’s brand of power metal. The resulting 2012 debut in “Shadows Over Lothadruin” was a fairly unique outing for its day, but ultimately proved a mixed bag stylistically that saw a highly competent group of musicians and a highly versatile front man in Francesco Cavalieri failing to bring their talents into focus. But with the ides of the 2010s came a revamped outfit, one that saw the heavy impact that Peter Jackson’s theatrical renderings of The Hobbit had on the public and opted for a more familiar stylistic approach.

To state that 2015’s “Wardens Of The West Wind” was a game-changer would be an understatement, both for this band and for the power metal world at large. It just seemed the right album at the right time when considering the auspicious returns to form enjoyed by the likes of Ensiferum, Elvenking and Alestorm at around the same time. What followed would be a highly impressive spree of folk-infused power metal that complete bridges the gap between the more melodic death-like strain purveyed by Ensiferum and the more mainline symphonic power mode ushered in by Turisas, of which “Wintersaga” is the third installment. It shares a fair bit of commonality with the more epic and bombastic character of its immediate predecessor in 2017’s “Stonehymn”, but ratchets up the speed and intensity into something that is dynamic enough to trade blows with the best of the genre, and occasionally showcases some affinity with the more lofty and wintry character of Jari Mäenpää’s more adventurous and indulgent efforts via Wintersun.

To the uninitiated, the formula entailed in Wind Rose’s mixture of folk and power metal influences is one where dense choral chants and folksy tunes provided by the keyboards provides the seasoning over what is largely a rustic, meat and potatoes approach to metallic cuisine. There are no slouches to speak of in the instrumental department and the band’s progressive metal roots do play a role in their elaborate approach to songwriting, but the chief individual draw of this band is Cavalieri, who manages to channel both the gruff upper range and deep chanting choirs that lend themselves about as much to Orden Ogan as they do Ensiferum. Occasionally he dabbles in some harsher vocal fair and even occasionally reminisces on his more Russell Allen-like vocal persona from this outfit’s forgotten debut days, but overall the presentation proves more in line with the working class demeanor that goes along with a bunch of merry dwarf laborers mining their way to greater riches. 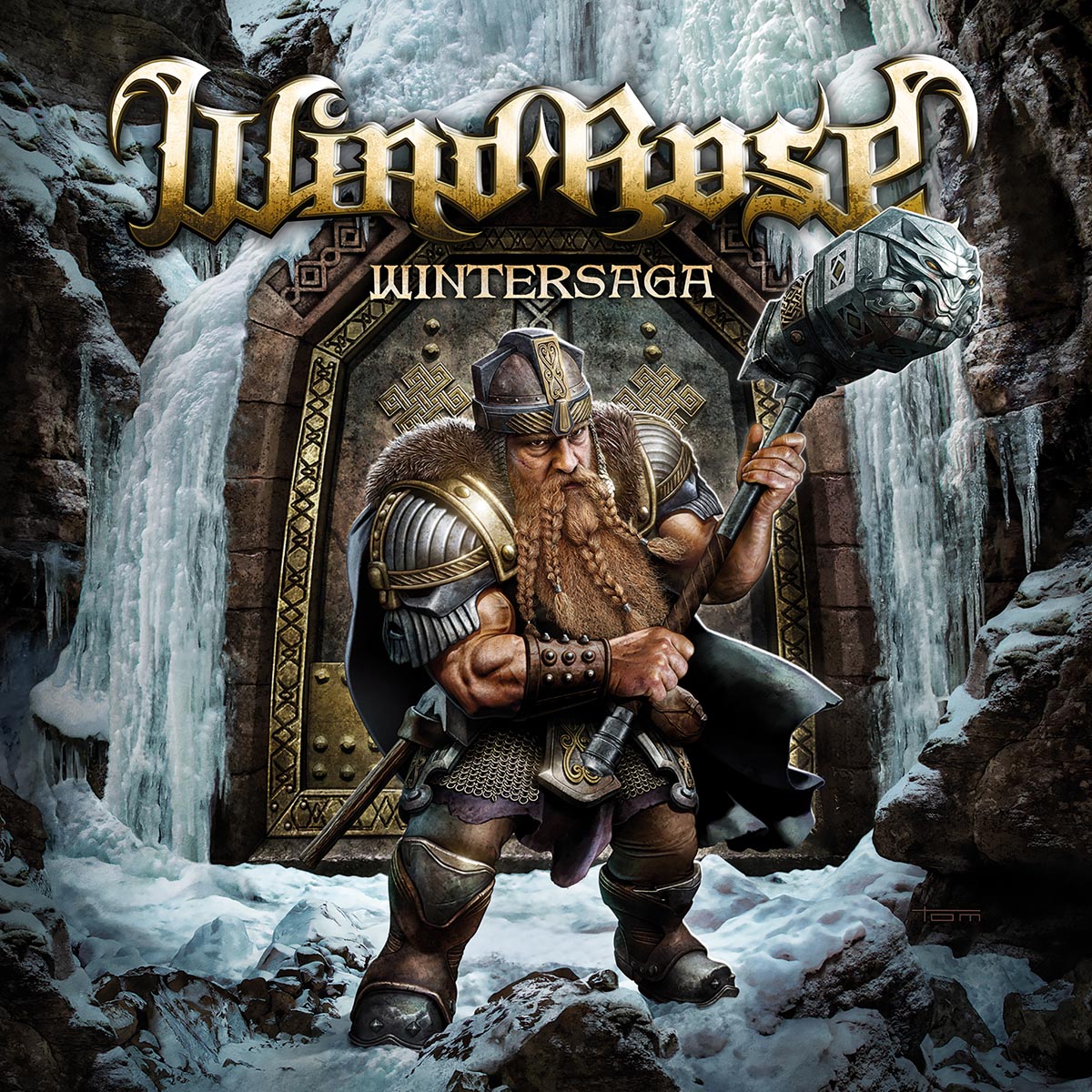 Despite sporting a very stylized niche, this is a band that knows how to mix things up when called for, and even manages a few surprises within a style that has been fairly commonplace for the better part of the past couple decades. Following a drawn out symphonic prelude in “Of Iron And Gold” that is sure to call up images of Peter Jackson’s latest trilogy of Tolkien emulations, complete with percussion elements that sound a lot like pickaxes striking stone, no punches are pulled in the metallic department. For the most part the songs tend to be of a high-impact character, spearheaded by driving and occasionally blasting epic romps like the title song “Wintersaga”, “The King Under The Mountain” and the riveting thrill ride with some occasionally melodeath moments “There And Back Again”. By the same token, more straight-forward cruisers like “Drunken Dwarves” and “The Art Of War” keep things mostly at a fever pitch yet exude a bit more of a simple, drinking song demeanor in line with the jolly songs of Vexillum, while mid-paced sing-along fun like the Yogscast cover “Diggy Diggy Hole” and “Mine Mine Mine!” have more of a comical, Finntroll-like demeanor.

Any self-respecting folk metal enthusiast who spends his time dancing in the pit instead of moshing should hear this, and the same basically goes for any trustees of symphonic power and even traditional German power/speed metal who don’t mind trading in their flashy guitar solos and leather jackets for a suit of armor and simpler yet still heavily nuanced presentation of how to turn a simple melodic segment into a high-octane thrill ride. This is the sort of album that basically runs the gamut of every melodic style of metal under the winter sunlight, all the while coming in a fairly humble package that is accessible to a wide-reaching audience. Some bands may eschew the idea of using a gimmick to define their sound, but Wind Rose not only does so with resounding success, but makes zero apologies for it and invites the entire world to trade in their day jobs for a chance to charge the gates of Erebor and slay the great dragon Smaug. Besides, few things are more metal than a race of men who spend their lives digging it out of the ground and turning it into all of our daily wares.

Like a band of proud dwarves making their way to the snowy peaks of Erebor, this fold of folk-obsessed Italian upstarts hit pay dirt with a collection of mighty hymns of Tolkien lore to rival Ensiferum and Elvenking on their best days