As a rule of thumb, I usually stay away from compilations. If I love the band they won’t bring anything new to my collection, and if I don’t know the band’s music, I simply go and do my homework, and get myself familiar with its back catalogue. Most of the times they are only shameless cash grabs, and I avoid them like the plague. It’s not all that uncommon these days for veteran thrash and heavy metal acts to offer up re-recordings of particular albums, or even to throw together a compilation of hand-picked tracks that have been reworked in a studio to give the modern fanbase a taste of what their classic material should sound like when brought up to the standards of their recent fare. There are cases where the original master tapes are unavailable due to legal issues with former record label copyrights, but whatever the cause, it generally fails, and also serves to confuse and convolute a legacy best appreciated through experiencing the originals, for all their flaws. That’s not ALWAYS the case… for instance, I rather dug Flotsam and Jetsam’s “No Place for Disgrace” re-recordings, the songs seemed to work in the context of their modern albums and sound way better and more powerful than they did back in 1988 with such a horrific production and mastering.

Then Italian symphonic-metal heroes Rhapsody (later Rhapsody Of Fire for legal reasons) formed originally as Thundercross in the mid-90s, changing their name for the 1997 album Legendary Tales. Founder members keyboardist Alex Staropoli and guitarist Luca Turilli were joined by vocalist Fabio Lione for a string of defining albums that took power metal in an operatic, symphonic and melodic direction, with albums often conceptual. Amongst the rotating line-ups were often a second guitarist, either on stage and/or in the studio. Recently Luca Turilli left amicably and formed his own version of the band, but more recently vocalist Fabio Lione departed, and there has been a Rhapsody farewell tour featuring Turilli, Lioni and former Rhapsody Of Fire members Alex Holzwarth, Patrice Guers and Dominique Leurquin. 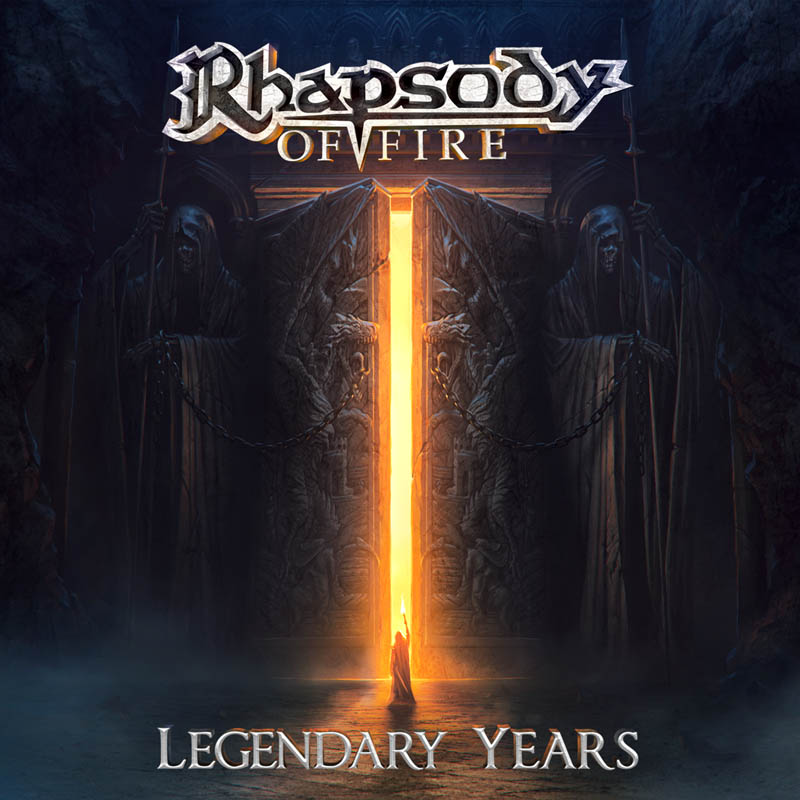 Now, returning to a one guitar line-up, with original member and keyboard player Alex Staropoli, joined by guitarist Roby De Micheli, bassist Alessandro Sala, vocalist Giacomo Voli and drummer Manu Lotter, Rhapsody of Fire has chosen to bring up a new album entitled “Legendary Years”, comprised by 14 re-recorded tracks taken from the band’s most creative and successful era, the period from 1997 to 2002. Apparently the idea for this special release was in the head of Alex Staropoli a while ago already. So they went on to turn it into reality, which finally resulted in a 75 minutes long album revisiting a selection of songs written and produced during the aforementioned 5 first years of the Rhapsody Era. All drums, bass, guitars, keyboards, vocals, epic choirs, opera choirs, and numerous classical instruments have been recorded anew. I won’t be doing a breakdown of the songs musically, they are tons of great reviews anywhere else on the albums that these songs originated from, go and check them out when you are done reading here! Instead let’s take a look at the record as a whole…

It’s hard to make previously well written and arranged songs sound better than they already did, yet one thing that is heavily evident from the very start of “Dawn of Victory” through the entire album is that the songs are played very faithfully to the originals. There hasn’t been very much, if any, noticeable change, they have been re-played very truthfully, keeping the power of these old gems almost intact. The sound production of “Legendary Years” is very good, yet not 100% perfect. The entire album is very loud with the guitars at the forefront of everything; and in some tracks, especially the faster ones, the keyboards and bass get completely overpowered. Shouldn’t have been for this production misstep, the songs would be near perfect renditions of the originals.

Musicianship wise, my only gripe is with the vocals. The new vocalist Giacomo Voli does a fine job presenting these old classics from the Fabio Lione’s era, and honestly he have really big shoes to fill. Many rabid Rhapsody fans will throw him into the pits of hell, simply because he’s a different guy, and that is completely unfair, he’s certainly got the chops to belt out on these tracks and deserves a chance to prove his temple. Nonetheless, I can’t think of a worse way to introduce a new singer than having him to perform a full selection of re-recorded versions of some of the songs the original singer made as great as they are. There was some poor choice thinking around this idea in my humble opinion.

I really like the beautiful album artwork by Alexandre Charleux, it sorts of convey a message for me: the gates for a new era for the band is approaching. And let’s be honest: with the incredible intolerance the metal community shows toward vocalist’s changes (just remember all the turmoil caused with big names like IRON MAIDEN, JUDAS PRIEST and ICED EARTH when frontman changes went down) to record this kind of album with a new guy at the microphone takes a lot of balls, and I applaud them for their courage. If you don’t know much about the previous history of the Italian pioneers of  the symphonic-power-metal sub-genre, this album would be a great place to get an overview of their finest hour. Their signature mixture of classical music, baroque soundscapes and heavy metal sounds topped off with mystical, medieval and folklorical lyrics is all around these songs, and whether you are a hardcore fan looking at completing your collection, or you like music centered around high fantasy themes and  the everlasting fight between good and evil, ranging from soft ballads, to upbeat metal melodies, and epic anthems, you have the proper albums in your hands.