A memorial statement begets a legacy.

The willow tree is a fascinating specimen that is arguably analogous to the very concept of death and rebirth. If a single branch is cut away, in the right soil conditions and with sufficient moisture, it will establish a new root system and develop into a new tree. Even when deprived of its very roots, this tree could be re-established with the right conditions and proper intervention by a third party. This little aside into the world of botany may seem a curious one when considering a latter day arrival into the millennial power metal wave that is Denmark’s own Pyramaze, but is also an appropriate one. Formed in 2001 by guitarist Michael Kammeyer, a root system of sorts was thus established with a permanent fold of musicians that included the highly prolific vocalist and Nightmare Records owner Lance King, and this very root system would find itself cut away as King and his brief successor in Iced Earth’s Matt Barlow would part ways with the fold, and eventually Kammeyer himself would retire with this band still arguably in its adolescence.

Though many years would pass between their 2008 studio album “Immortal” and a follow up, the remnant of Pyramaze’s lineup would prove undeterred and like the weeping willow alluded to previously, would take root once again with the triumphant comeback that was 2015’s “Disciples Of The Sun”. With a highly charismatic new front man Terje Haroy, perhaps best known for his work on the Norwegian power metal act Memorized Dreams’ 2004 debut “Theater Of Life”, and the band’s longtime producer Jacob Hansen assuming guitar and bass duties (the latter in a studio capacity), this album would prove a formidable and more modernized comeback by an act that most were about to consign to the memory of the prior decade. Yet while all of this was accomplished and a highly ambitious, if somewhat underwhelming, follow up in the 2017 post-apocalyptic conceptual work “Contingent”, some of the band’s early fan base were missing the mystique of the fantasy-driven storytelling of the Lance King years and the more power thrashing intensity featuring Barlow at the helm. It is into this context that 2020’s “Epitaph” emerges to challenge any naysayers regarding this outfit’s post-2000s incarnation.

Far from being an overt throwback to the days of power metal yore, what has been accomplished here is better understood as a brilliant synthesis of this band’s newer, heavier and more progressive sound with the melodic splendor and drive of the good old days. The first taste of this mixture of past and present manifests in a cinematic prelude and extravaganza of keyboard-produced orchestral pomp as only Jonah Weingarten can muster in the instrumental opener and title song “Epitaph”. Feeding off the rise in drama built off the aforementioned intro, the colossal opening pounder “A Stroke Of Magic” begins with a mighty thud, sticking a tad closer to the rhythmic nuance of the band’s most recent offerings, but having more harmonic interplay between the guitars and keyboards, often reminiscing upon the loftier moments of “Immortal.” Other examples of mid-paced, prog-infused majesty such as “Particle” and “World Foregone” tread a similar stylistic path, but lean a bit more heavily on the newer side of the Pyramaze coin and remind heavily of standout moments originally heard on “Disciples Of The Sun.” 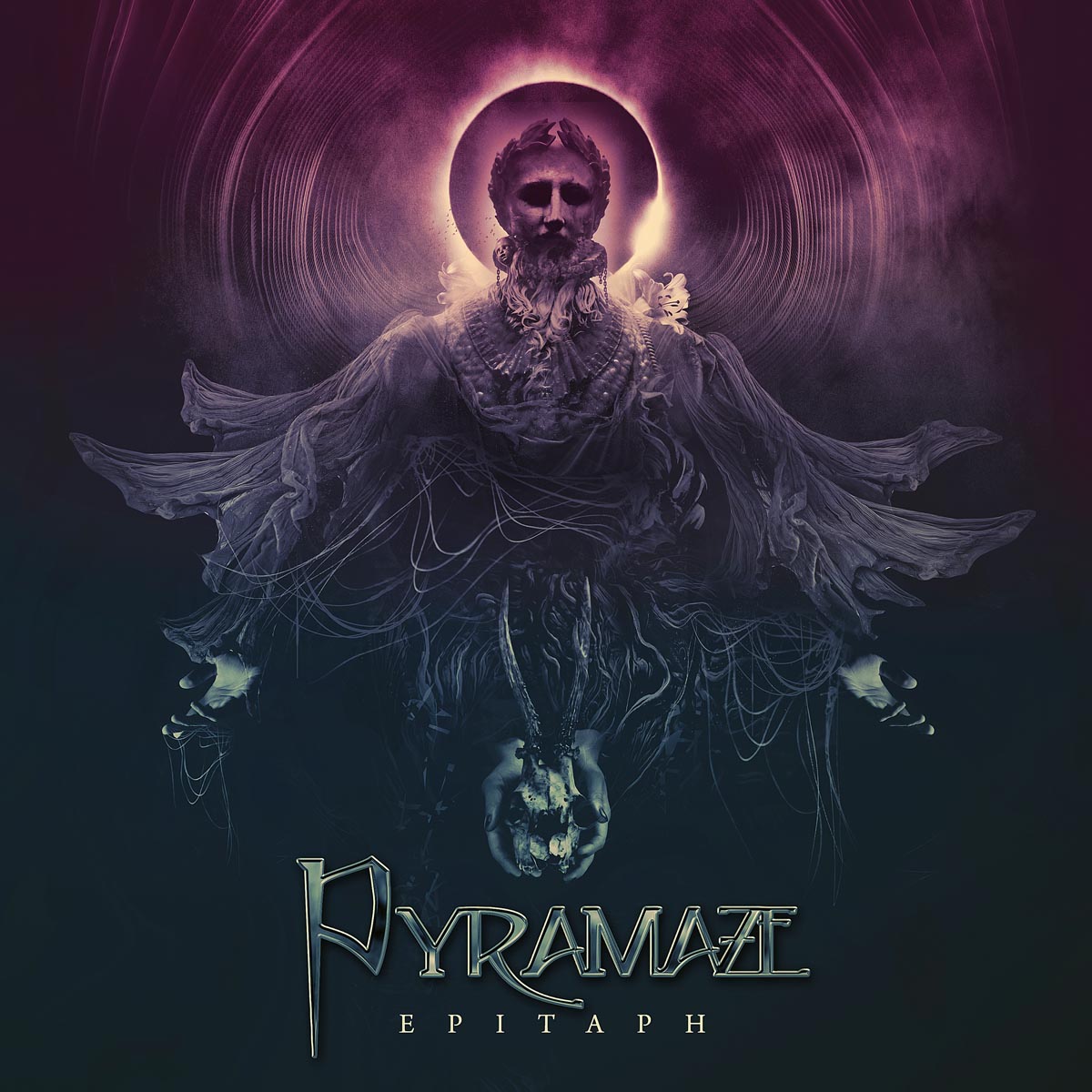 While definitely an album that conforms to the band’s current stylistic paradigm, the aforementioned songs (most of them released previously as promotional singles) paint a somewhat deceptive picture of a band restating the same basic formula, and it is one that fades quickly when considering the rest of the album. The more animated anthem “Final Hour” showcases the least intense stylistic deviation, going a bit closer to the serene landscapes of “Legend Of The Bone Carver” while chugging along at a fairly swift tempo, though the lead guitarist showcase by Toke Skjonnemand is the chief draw as his flashy guitar solo segment sees him paying tribute to Brian May with a less than subtle partial quotation of a passage of “Bohemian Rhapsody”. The modern chug-fests that get close to Communic territory in the riff department such as “Steal My Crown” and “Indestructible” prove highly infectious and often channel the consonant character of Melancholy Beast, and Terje’s soaring howls even sound a bit similar to what Lance King originally brought to said album at times. The symphonic duet with Unleash The Archers vocalist Britney Slayes also hearkens back to the primordial days of the band, albeit with a chunkier production and a female vocal foil about as gritty and intense as her counterpart.

As a whole this album is a monumental accomplishment, but amid the compact and highly engaging songwriting that rounds out the lion’s share of its duration, the absolute coup de grace comes at its conclusion in the form of a 12 minute magnum opus dubbed “The Time Traveler”. The genesis of this masterwork was likely the famed 2016 Power/Prog performance that featured this already formidable outfit reunited with their two prior front men, Matt Barlow and Lance King respectively, and the trio vocal assault that emerged then was so astounding to fans the world over that it just begged for a studio successor. The song itself stands as one of the more ambitious works ever dedicated to recording in all of power metal’s history, blending every characteristic from this band’s near 20 year history into a singular epic tale. The synchronicity between Barlow’s beastly roar and King’s hypnotic, almost esoteric croon with Haroy embodying a perfect middle ground between the two is nothing short of breath-taking, and the instrumental performance surrounding them is nothing short of magical. There have been similarly grand musical happenings that saw three titans of the style come together such as Heavenly’s “Time Machine”, let alone the various combinations of singers that came about in the early days of Avantasia, but this is one for the ages.

Every album is regarded as a band’s best effort when it’s about to hit the shelves and the hype machine is in full force, but this is one where the hype falls far short of the fact. To put it in fuller perspective, yours truly has always regarded “Legend Of The Bone Carver” as this band’s crowning achievement, and until yesterday he was convinced that no album under the Pyramaze moniker would match it without King being at least involved. This album has actually managed to surpass said 2006 classic, drawing upon the same creative well, and even bringing back the original impresario to lend his unique singing style and narrative prowess to rain down the nostalgia on top of what is a present day affair. To be fair, no vocalist associated with this band has been a slouch and a massive part of what makes this album work is Terje’s versatility as a singer and the songwriting taking some needed steps back into the early 2000s power metal formula that makes for a more climactic experience. The only real flaw to speak of here is that this album’s closing song will likely dwarf what comes before it for most who hear it, but it’s a small price to pay for greatness.

One of power metal’s more progressive wildcards delivers a massive opus, bubbling over with triumphant anthems and nuanced grooves to rival their grand accomplishments from their formative years