Considering that Opeth was originally formed to become “the most evil band in the world”, it seems fitting that one of their strongest albums would be their 13th. A band that can create a triumph after a dozen albums is a rare thing, but then Opeth have always been something of a rare creature. Well into a successful career, leader Mikael Åkerfeldt let it be known four albums ago that many of the metal elements of the band were no longer of interest to him, and since then they have moved in a decidedly more prog-rock direction. Thus, each subsequent album has been greeted with a degree of trepidation as some fans fall away and others climb on board the Opeth train. For those who have made it this far, “In Cauda Venenum” will almost certainly be warmly welcomed as it makes a strong case for being the most successful of the post-“Watershed” albums, and perhaps even a standout of their entire discography.

What “In Cauda Venenum” has going for it is consistency. Every song succeeds in delivering hypnotic melodies, killer musicianship, and often a welcome balance of light and shade that has made Opeth so beloved. Few bands are as successful at working the dynamics between heavy guitar attack and pastoral, acoustic sections in the same song. From “Moonlapse Vertigo” to “Ghosts of Perdition” to “Hex Omega”, Opeth has proven masterful in this regard and while the level of brutal attack of past decades may no longer be present, there is more magic of “the old days” on this album than we have heard of late. This especially comes as a surprise after previous album “Sorceress”, which indulged in more acoustic fare with occasional heavy songs interspersed. On this new release, the band consistently deliver one knockout song after another and never let the momentum take a pause. The songs themselves may not single-handedly surpass what they’ve done in the past, but rarely before has an album been so consistently impressive throughout.

A note should be made that Åkerfeldt found initial inspiration by recording the album entirely in Swedish. He later relented and recorded a version with English lyrics as well, but his heart seems to be in the original take from his native tongue. The listener can sample both sides of the equation through videos which feature each language and decide which they prefer. Seeing as this review is in English, we’ll be keeping to that version and those titles, though it’s interesting to note that Åkerfeldt doesn’t always offer literal translations. For example, the song “Svekets Prins” translates to “Prince of Lies”, but its author chose to call the English version “Dignity” instead; and “Minnets Yta” which would literally mean “Surface of Memory” has been titled “Lovelorn Crime”. Apparently Åkerfeldt enjoyed using the translation process as a creative outlet as well.

Curiously, the only detour the album takes is right at the start with opening instrumental “Garden of Earthly Delights”. It concludes with a boy saying in Swedish “If you stop to pee…you’re gonna be dead” before immediately segueing into the opening fervor of “Dignity”. Åkerfeldt himself seems to brush off the opener “Garden” by saying that “Dignity” is the first “real song” on the album, although it was the last song written for the recording. It begins with a speech from a former Prime Minister of Sweden, who trails off by saying, “Someone said the other day that we reside in the great time of rupture…” Although the speech was made in 1969, it reflects the general themes of the album: upheaval and loneliness. It’s a remarkable track, with an organ/guitar progression reminiscent of other songs on recent albums, then launching into a blistering guitar solo before retreating to one of their classic mellow passages with Åkerfeldt singing in falsetto. Already we have melded the two worlds of newer and older Opeth, a winning approach which is repeated throughout the album. Followup “Heart In Hand” pulsates forward at a familiar Opeth pace, being one of the album’s heavier songs, complete with swirling distorted effects which then give way to a beautiful ballad sung with tenderness. The Swedish title translates more directly to “The Heart Knows What The Hand Is Doing”, reflecting society’s deceptive nature, though the conclusion brings us back to the innocence of a child. 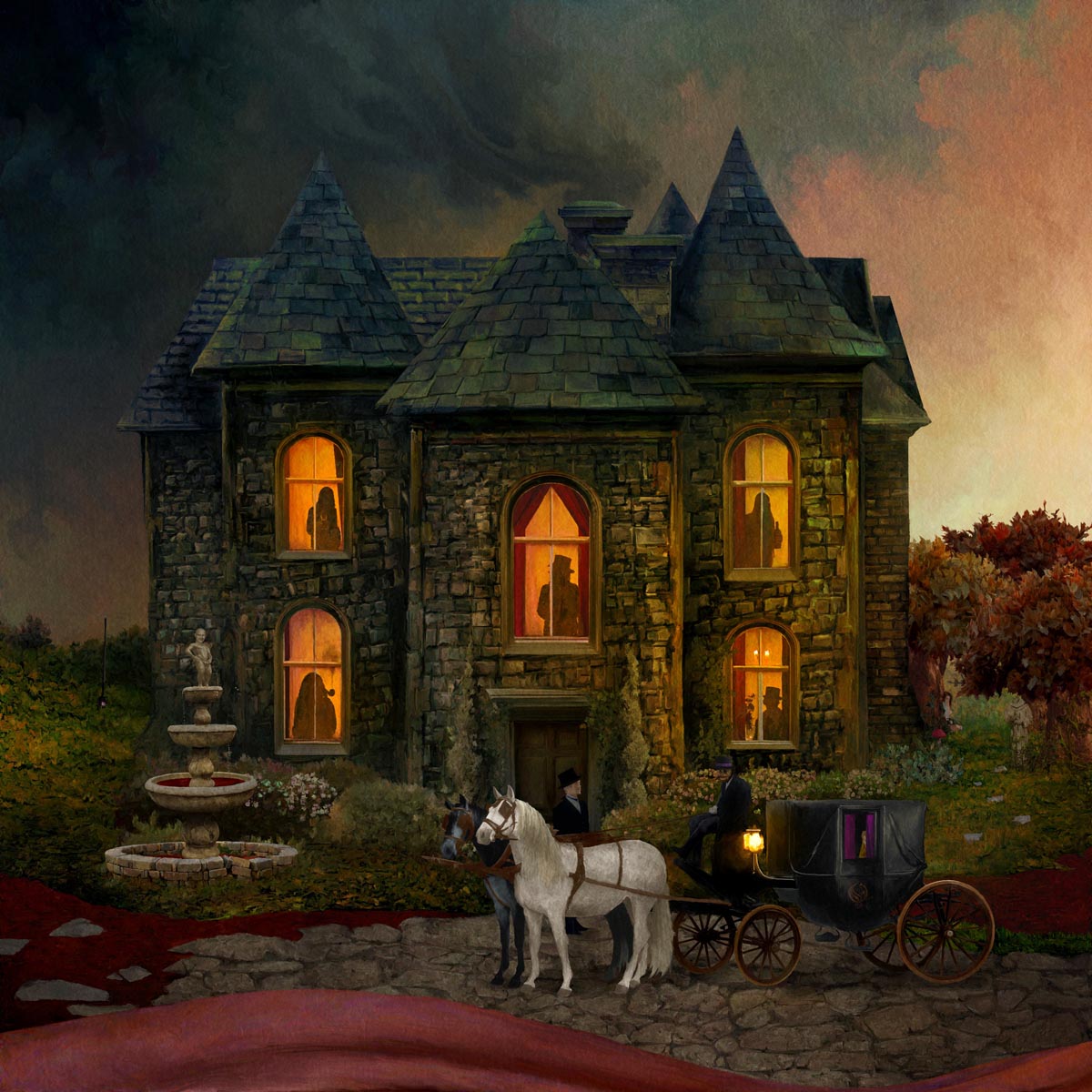 With the album’s first two singles being those mentioned above, fans are likely anxious to know if the rest of the album follows suit. Again, the strength of this album is in its consistency so if you liked those two, there’s plenty more where that came from. “Next of Kin” holds a certain grandeur in its melodies, feeling at once familiar and yet still exciting. “Lovelorn Crime” may be one of Opeth’s most heart wrenching moments, the piano-based piece inviting added strings for impact, but it’s Åkerfeldt’s delivery which seals the deal. The interplay between Fredrik’s Åkesson’s closing guitar solo and Åkerfeldt’s vocal wails will leave no survivors. “Charlatan” won’t let the weary rest, however, with its insistent rhythm section hammering away in Opeth’etic delight, until its final close where the chanting of monks heralds in one of the supreme highlights of the album: “Universal Truth”. Epic in scope, this song displays the genius of the band’s ability to traverse heavy and gentle sonic terrain with seamless grace. What would be hopelessly unfathomable to most other bands feels completely natural here, a true gem of a song that is pure Opeth.

Classical guitar licks offer an enticing intro to one of the album’s most adventurously unexpected moments: a swinging jazzy piece concerning the lone hunter “The Garroter”. While at times playful, the undercurrent is one of a menacing swagger, holding to the album’s dark theme. It’s a welcome change of pace before we get back on track with a more familiar modern Opeth approach in “Continuum”. Once again the band finds delight in exploring the extremes, with gentle moments having their day until Åkesson’s wah-guitar solo commands attention, then giving way to flowing melodies from Åkerfeldt’s soothing voice. Yet another winning track. Album closer “All Things Will Pass” takes a measured approach in exploring the passing of time with almost anthemic delivery. As the final chord progression fades out, it just feels right. Most everything about this album feels right.

As we’ve come to expect, the band perform brilliantly. The twin guitar attack of Åkesson and Åkerfeldt is met with equal intensity from the Martin rhythm section of Mendez on bass and Axenrot on drums. Joakim Svalberg is also a busy boy on a wide range of organ and keyboard patches; indeed keys are so integral to modern Opeth that it is hard to believe the band didn’t have a dedicated keyboardist in its earlier days. The vocal delivery from the band is impeccable, Åkerfeldt’s voice always seeming to improve with each album, and the overdubbed choir approach during key moments (such as the opening of “Dignity”) hits the listener over the head. All of these elements coalesce into the perfect storm that is “In Cauda Venenom”. Roughly translating into “the poison is in the tail”, there is no doubt that Opeth still have a sting to them. But it is the elements beyond the sting that truly make this band one of a kind.

Having explored a vast range of styles in their celebrated history, Opeth aren’t bringing much new to the table for their 13th album. Instead, the secret weapon of “In Cauda Venenum” lays in how the band wields their considerable strengths and in this regard, they are supremely victorious. As one of the most consistent albums of their career, “In Cauda Venenum” is relentless in its emotion, its range of dynamics and its overall quality. A highlight of 2019 and beyond.