Pharaoh of the American South.

Some bands stick to what they know, others will seemingly reinvent themselves with each new studio effort, but South Carolina’s inhabitants of little Egypt dubbed Nile came to their place in the pantheon of American brutality by a rather unique third path. Multi-instrumentalist and mastermind Karl Sanders, arguably death metal’s earliest Egyptologist of sorts, originally cut his teeth with a thrash metal project dubbed Morriah in the mid-1980s and occasionally found himself sharing a stage with the likes of Morbid Angel before the end of said decade. Even as the earliest incarnation of Nile took shape in the mid-90s, there was still a remnant of this old school thrash sound to be found in their earliest demo material, though the past association with the Florida death scene would find this outfit adopting a form of sonic brutality and technical madness that would take them about as far away from old school death/thrash as one could get within the death metal paradigm, eventually showcasing a greater affinity for the viler and more violent sound of the New York scene.

In a necrotic nutshell, the character of sound that has come to define this outfit’s brand of death metal bears a heavy affinity for the flashy, aggressive brand of blast-happy madness that one would expect from Suffocation or Dying Fetus. This naturally results in an array of virtuosic elements from the guitar playing to the rhythm section that dovetails with a deep, guttural vocal performance that’s a tad more inhuman than the signature sound of Chris Barnes, but also a bit more dynamic in range than the deep and morbid character of Frank Mullen’s signature barks. All of this, nevertheless, falls pretty squarely into textbook territory for a typical American band merging the brutal and technical excess of the style, thus the unique character of sound that Nile exhibits comes into play via a vernacular set of influences befitting the band’s namesake. Instead of being a wholly atonal affair in line with Suffocation or Cannibal Corpse, there is a Middle Eastern/North African vibe to the harmonic scheme of this music, one that is present both in the quasi-theatrical symphonic and ambient additives surrounding these songs as well as the brutal riffing and blasting segments themselves.

While the resulting sound of this band’s unique blend of influences is highly unique, their employment of this stylistic niche over the past couple decades has largely been an exercise in military-like precision, resulting in albums that tend to run together in a series of sorts. In light of this, the only real evolutionary process that has emerged from this band’s 1998 debut LP “Amongst The Catacombs Of Nephren-Ra” up until the present has been a growing degree of brutality and modernity due to updated studio technology. As such, their latest and ninth studio effort “Vile Nilotic Rites” finds itself in the similar, almost Behemoth-like brand of auditory violence that sounds half like a death metal album, and half like the soundtrack of a horrific version of the film Stargate or some other film set on the southern or eastern end of the Mediterranean. Being the sole founding member still in the fold, Karl Sanders’ vocal presence and songwriting is the dominant feature, though one would be remiss to downplay the machine-gun precision of drummer George Kollias or the fancy six-string work of Brian Kingsland. 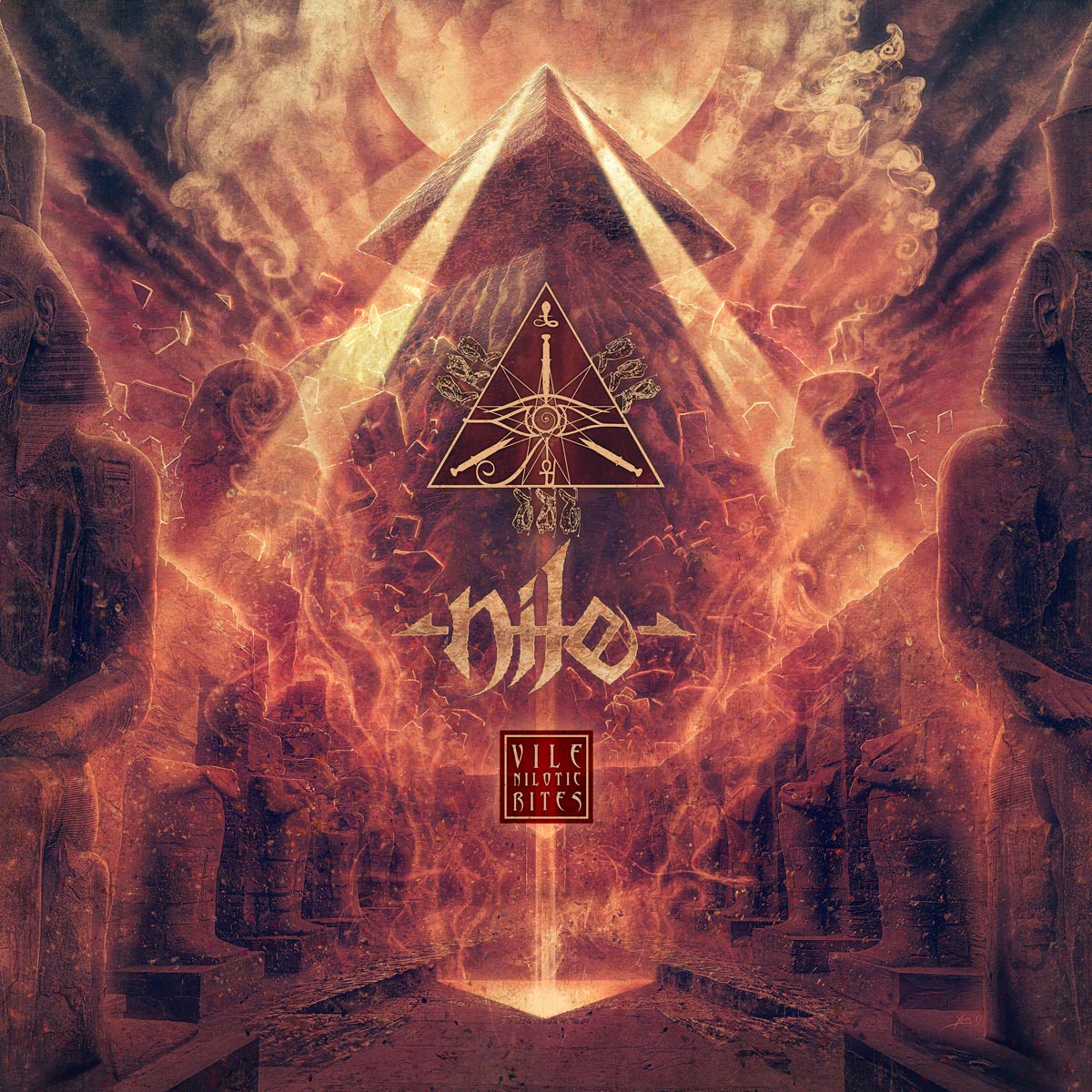 In terms of strengths and weaknesses, Nile is a band that has generally functioned on a dual path of short, concentrated doses of sonic adrenaline versus drawn out, more stylistically eclectic offerings that lean into a more theatrical/mystical vain, so it tends to be a subjective process in picking a favorite. For those who prefer their brutality in a compact package that mirrors the sort of all violence, all the time mode displayed by Dying Fetus, there are some truly colossal offerings in “Oxford Handbook Of Savage Genocidal Warfare” and “Snake Pit Mating Frenzy” that tone down the Egyptian folksy elements for something that can trade blows with any New York-based outfit. On the other side of the spectrum shines some truly astounding diamonds of ambitious and epic songwriting in “Seven Horns Of War” and “The Imperishable Stars Are Sickened” that take elements of that same aforementioned brutality and tempers it with elements of symphonic bombast, Eastern mystique and a more controlled groove to take the listener on a truly harrowing journey.

It may seem a cliché given that most bands tend to play to a specific target audience in the same manner, but when it comes to Nile, liking one of their albums tends to result in liking everything they put out. Relative to previous outings, this album goes a bit heavier on the elongated musical storytelling and even features a full blown move into emulation of ancient Egyptian music by Karl Sanders on the short instrumental “Thus Sayeth The Parasites Of The Mind” where he takes up an Eastern plucked-string instrument and fashions a virtual orchestra around it that results in something that could pass for a Hollywood film score. It’s not something that Nile hasn’t done before, though the way that it strikes the ears this time around is all the more compelling given the ongoing advances in recording studio tech. In essence, this is an album that sticks to what works, and though it may rope in a few newcomers that have already taken the plunge with Behemoth or Fleshgod Apocalypse, but otherwise is tailor made for existing fans. Nevertheless, a truly solid offering for those who like their death metal steeped in technical flair and symphonic largess.

1. Long Shadows of Dread
2. The Oxford Handbook of Savage Genocidal Warfare
3. Vile Nilotic Rites
4. Seven Horns of War
5. That Which Is Forbidden
6. Snake Pit Mating Frenzy
7. Revel in Their Suffering
8. Thus Sayeth the Parasites of the Mind
9. Where Is the Wrathful Sky
10. The Imperishable Stars Are Sickened
11. We Are Cursed

Continuing to raise a curious stylistic niche into a grand, decades long tradition, the self-appointed Pharaoh of American technical death metal raises the brutality and theatricality stakes yet again with another colossal Ithyphallic opus