An arctic blast from American metal’s past.

If the prior decade has taught anything, it is that the ebb and flow of trends has a cyclical nature, as proven by the rekindled interest in heavy metal primitivism that took the scene by storm in the 2010s in what was dubbed the New Wave of Traditional Heavy Metal. But even more auspicious than the throngs of younger bands that sprouted up playing in a style that was all the rage about 30 years prior was the second chances that were afforded to many of the acts of the style’s original heyday who didn’t quite break through into widespread recognition. It was during the height of this revivalist craze in 2016 when the vocalist of a fringe player in the USPM scene out of Portland, Oregon dubbed Glacier formed a tribute band named Devil In Disguise (after one of the song’s of their lone studio EP) with new musicians and paved the way for the rebirth of the original band a couple of years later, with the blessing of the other now retired original members no less. 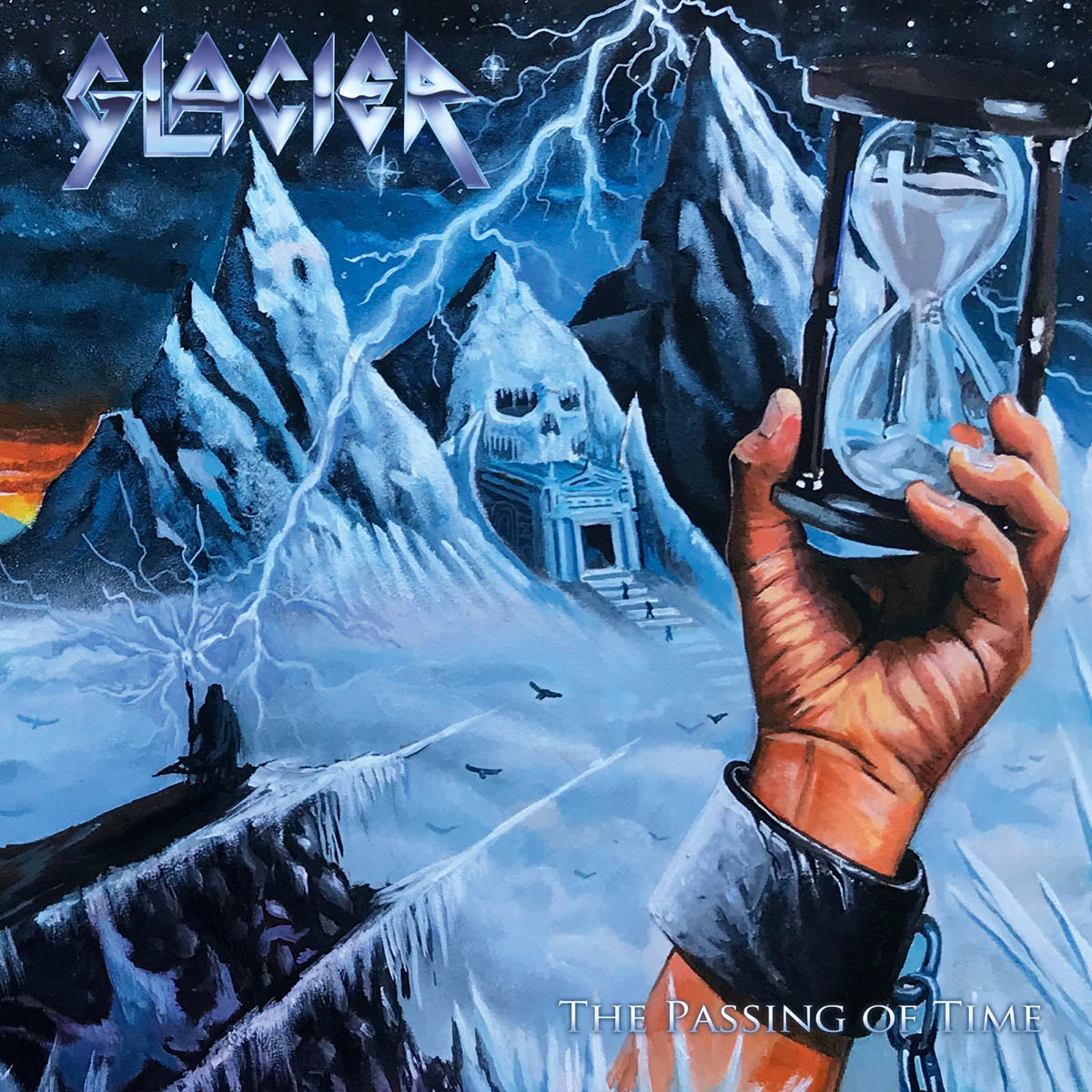 “The Passing of Time” Album Artwork

Holding true to the original lineup’s commitment to bridging the divide between the working class heavy metal ideals imported from the NWOBHM and the more lofty musical ambitions of American power metal sound as typified in the likes of Queensryche and Liege Lord, this reformed powerhouse’s 2020 debut LP “The Passing Of Time” is a true classic stuck out of time. Led forth by the heroic and soaring vocal work of helmsman and lone original member Michael Podrybau, this quintet offers up a crunchier, more biting take on the sword and sorcery sound that many have been pursuing of late. It’s a bit more swift and guitar-centered than the loose, Sabbath-influenced jamming of Cirith Ungol, but it proves to have a similar mystique about it. The elaborate character of the riff work gives things a less strictly structured character than a typical Iron Maiden-influenced American heavy metal act, but one can’t help but also notice the fairly blatant influences taken from said NWOBHM icons when considering the heavy amount of harmonic interplay between the guitars.

“The Passing of Time” Album ArtworkTo be clear, though this album proves quite elaborate in character, it is largely an exercise in old school metal conservatism, and the eight songs that round out its duration establish themselves as much by familiar elements as they do by sheer potency. For those who enjoy an up tempo, catchy romp that conjures up memories of the infectious moments heard on Iron Maiden’s “Piece Of Mind,” driving anthems such as opener “Eldest And Truest” and riff happy cruiser “Ride Out” are practically made to order, though Podrybau’s smoother and slicker vocal display gives things a bit more of a gallant feel. On the softer side of the spectrum, epic power ballad and holdover song from the mid-80s “Sands Of Time” has a bit more of a Manowar brand of heroism going on, though again with a more airy and regal vocal display. Even the speed-infused crusher “Into The Night”, which leans closer into the kinetic character of USPM as exemplified by the likes of Helstar sees a band coming out sounding like the heroic knights associated with Hammerfall than the Conan The Barbarian aesthetic common to 80s USPM bands.

Though a relatively short offering by the standards of what passes for epic heavy metal in this day and age, that label is the only way to accurately describe what is at play on this album. Barring the longer duration of closing anthem “The Temple And The Tomb” and the almost progressive way that it moves from a marching groove into a fast-paced power metal extravaganza with guitar harmonies scattering to the four winds, the bulk of what occurs on here takes the concept of doing more with less time and elevates it to an art form. Former Malevolent Creation and Against The Plagues guitarist Marco Martell and compatriot Mike Maselbas drive this album at least as much as the vocals do with a brilliant and highly expansive take on the signature style that Adrian Smith and Dave Murray brought to the masses in the 80s, paving the way for the power metal scenes that would emerge on both sides of the Atlantic. It’s a fun, quick paced romp for those who like their metal elaborate and dripping in heroic tropes, and hopefully it won’t be the last word out of this group in either a studio or touring capacity.

“The Passage of Time” track-listing

After 35 years of being metaphorically frozen in time, a small time player from the mid-80s USPM scene makes a big time return with a long awaited debut LP to sate the appetites of a new generation hungry for the old ways.