Thrash till death and rebirth.

While there is much to be said for a band getting the job done in the studio, wherein thrash metal is concerned, an outfit’s mettle is not truly tested until it’s been displayed in the flesh. The peculiar case of Teutonic thrash veterans and over-the-top showmen Destruction is particularly noteworthy given the band’s frequent vacillations between the power trio and quartet arrangement in both a recording capacity and in the live setting, resulting in a number of highly potent yet very different incarnations of the band. Some have been quick to note their original incarnation being in the 3 person arrangement on their first two LPs, culminating in the bulk of their wildly heralded classic songs, yet their debut live offering “Live Without Sense” is often the most heralded despite featuring the same dual guitar assault that set “Release From Agony” apart from its predecessors, and their most recent and fourth foray into capturing the concert experience “Born To Thrash” compares most to said release.

Despite the co-founding half of this fold represented in guitarist Mike Sifringer and bassist/vocalist Schmier being in the throes of middle age, one wouldn’t know it by the youthful exuberance on display by them and similarly aged newcomers to the fold that round out this quartet. Of particular note is the extremely crisp and precise vocal delivery on display here, as Schmier hits every single high note while still managing to lay on that gravely yet powerful growl that makes him only a tad less extreme than Mike Petrozza. The dueling riffs and shred breaks out of Sifringer and recent recruit from the obscure power metal act Gonoreas/Gomorra Damir Eskic rivet in a manner that occasionally reminisces of the flashy and melodic grandeur that Kai Hansen and Michael Weikath brought to “Walls Of Jericho”, while otherwise conforming to a conventional thrashing flavor in line with the Gary Holts and Kirk Hammetts of the world, while the kit work of long time Primal Fear drummer Randy Black only further brings out this fold’s latent power thrashing tendencies.

The culmination of these performers merging together their diverse yet consistently German stylistic inclinations is a performance that rivals all of the three previous live recordings put together under the Destruction name. The song selection dwells completely upon the two previous apexes of this band’s career, namely the first three albums that took the mid-80s thrash scene by storm, and the early 2000s offerings when Schmier returned from his 1990s hiatus that arguably helped to kick star the ongoing New Wave of Thrash Metal, while also including a couple off their latest LP “Born To Perish” that could arguably be seen as so well suited to the company they keep as to qualify said album as part of a third zenith point. The resulting energy level is a fever pitch of thrashing mayhem that actually makes one thankful that the set runs a little less than an hour in length, because 61 minutes of this degree of intensity would probably leave most mortals with irreparable neck injuries. 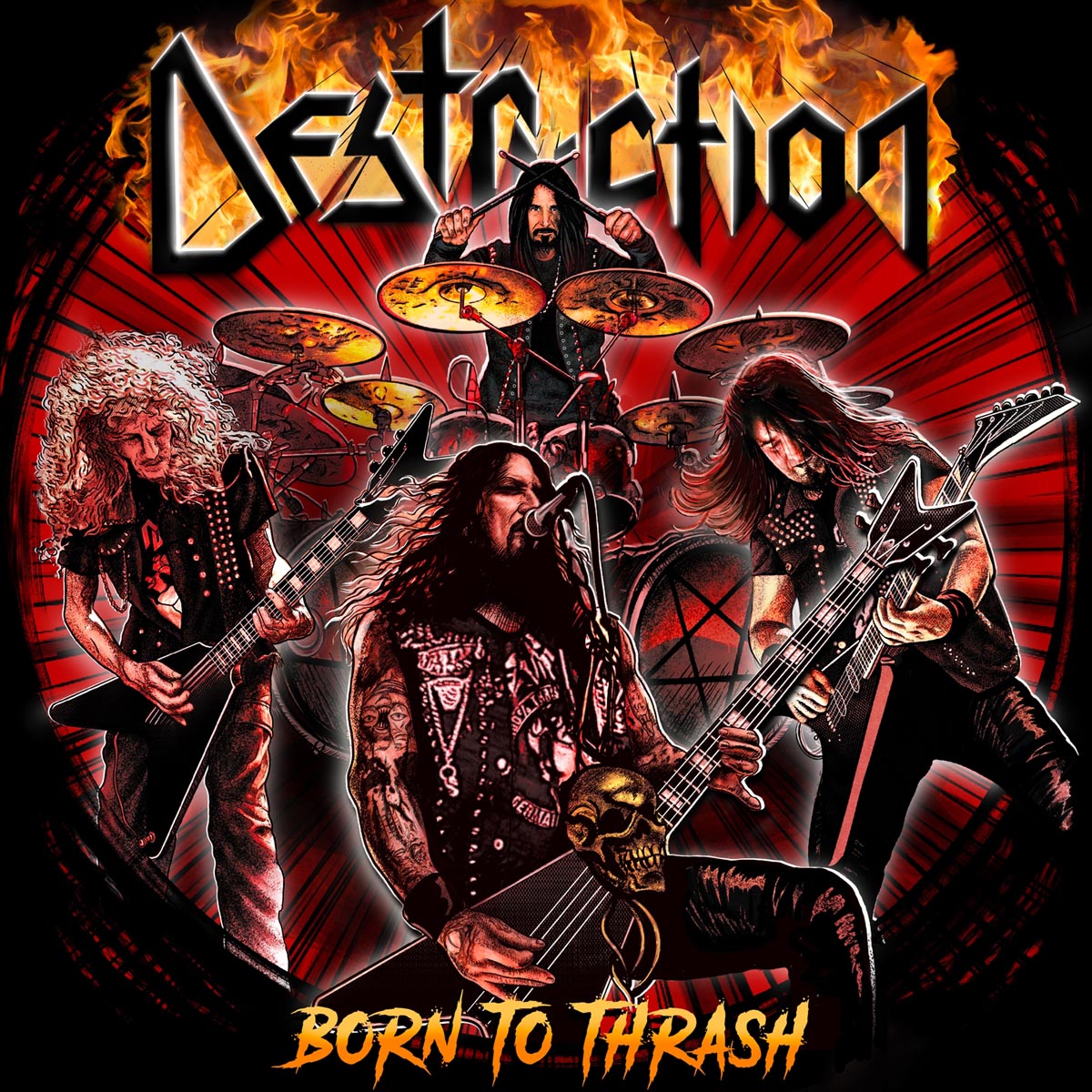 For the most part, this showing conforms to a working class approach to getting the job done on stage, forsaking any gimmicks and elaborate segues for a direct auditory celebration of metal played fast and ferocious. Occasional in-between song rants out of Schmier notwithstanding, this is about as concise of a delivery as one would expect out of a band looking to leave a lasting impression, and classic bangers that blur the lines between Slayer-styled chromatic dissonance and German speed metal such as “Curse The Gods” and “Mad Butcher” lay some deep ones right in the listener’s skull. Generally the older classics from the mid-80s tend to pack the greatest punch, but more recent pummeling thrashers like “Born To Perish” and the slightly more modernized throwbacks off 2001’s “Antichrist” “Nailed To The Cross” and “Thrash Till Death” give them a solid run for their money and showcase a band willing to stick to their stylistic guns despite what decade it happens to be.

If there’s any selling point that separates this from any of the previous exemplary live offerings that this band has dished up over the past 3 decades, it is that the dueling leads of Sifringer and Eskic give this a tad more of a technical edge and provides a bit more of a bridge to those people who prefer a more melodic brand of German speed represented in the likes of Primal Fear and Paragon, and might consider Kreator and Sodom to be a tad too brutal for their liking. Nevertheless, this outing pulls zero punches and lays on the heaviness quite brazenly, to the point that one has to wonder if the current crop of new wave thrashers know what they’ve gotten themselves into by adopting the Teutonic aesthetic. Following yet another excellent studio display in “Born To Perish”, this is the sort of supplemental offering that should be enjoyed at full volume by any and all self-respecting thrashers, and will prove a viable alternative to the real thing during this ongoing era of the quarantine blues.

The melodic and power-driven affiliate of the Teutonic thrash trio proves to be no slouch when measured against the recent outings of Kreator and Sodom, unleashing a brilliant onslaught of raging old and new with a youthful vitality intense enough to pass for 1986