Thor swung his hammer and lightning filled the sky with a tremendous roar. A storm had arrived, one inspired by the timeless and enchanting allure of the everlasting Nordic mythos, and this storm was named Brothers of Metal. Eight members strong, this power metal act took the world by surprise in 2017 with their debut album “Prophecy of Ragnarok.” An instant his with their accessible, vibrant style, the name has quickly become household among fans of power metal and Nordic mythology alike.

Anticipation for the band’s next epic saga has been especially high following their latest tour, which has them traversing Europe from late 2019 through early 2020. As though their first proper tour wasn’t exciting enough on its own, their notoriety has grown with such speed that they were rewarded with a headlining spot after spending the summer tour circuit on festival stages.

Sophomore album “Emblas Saga” is another soaring, ambitious take on Norse mythology. Thematically they follow in the footsteps of viking metal titans Amon Amarth, covering epic tales of the frightening Jormungand all the way through awestruck revelry of the ever-inspiring Valkyries. Where Amon Amarth drives home their tales with high-octane death metal roars, Brothers of Metal use the clarity and flourishing excitement of power metal to focus more intently on their narrative drive. In a genre often heralded for its simplicity and straightforward approach to songwriting, Brothers of Metal accomplishes their near-cinematic storytelling by filling the stage with three distinct vocalists, three guitarists, a bassit, and a drummer.

The band does not shy away from labels calling their sound highly commercialized: rather, they embrace the same tactics of expertly polished final production that allows other easily digestible hits such as the legendary Sabaton and Powerwolf to excel. And similarly to those aforementioned acts, when listening to “Emblas Saga” it’s easy to see that they did not turn their backs on the same formula that brought their debut into the international spotlight. But their strength seems to serve as a double-edged sword, causing “Emblas Saga” to come across as not just repetitive comparative to their prior work, but concerningly identical between tracks. For all the talk of giant serpents and seeking the glory of Valhalla, this band of Swedes has tread with incredible caution throughout their latest creation. 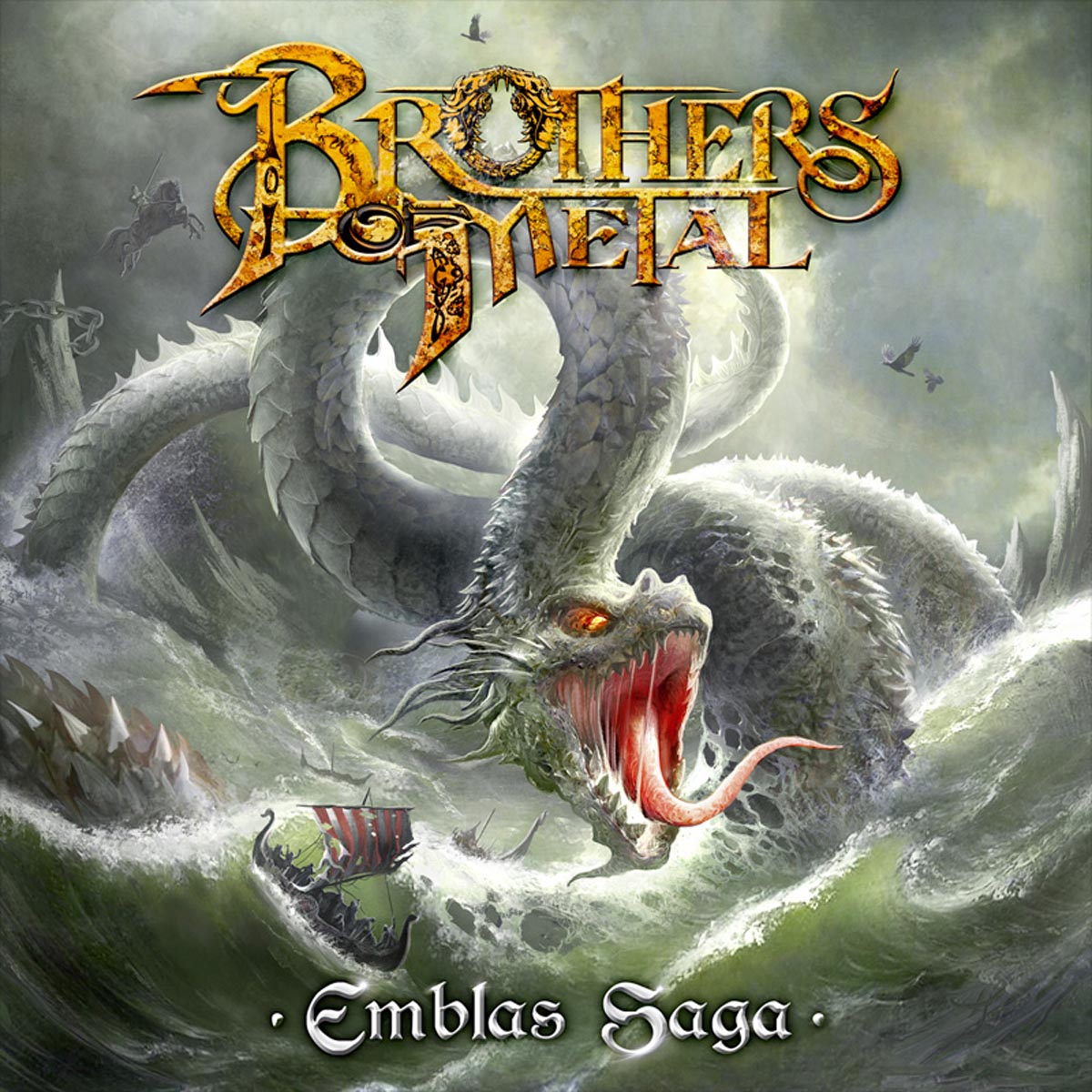 Opening with narration is neither groundbreaking nor incredibly brave, but from the very start Brothers of Metal have shown enough discretion to make their first impression on listeners a strong one. The narration of “Brood of the Trickster” comes from a deep, raspy voice, one that seems all-encompassing as it begins to set the stage for an album of adventuring and divine power to follow. Crackling firewood gives the impression that this story is one being told intimately, as though to friends in the dark nights of a chilling Nordic winter, a perfect introduction for the subject matter that follows. Pacing and inflection of the narration is of a quality rarely heard in voice acting on albums, and creates a sense of excitement and promise for the music to come.

Second track “Powersnake” hits without pulling any punches, striking with the unwavering power of leading vocal duo Ylva Eriksson and Joakim Eriksson from the track’s very start. It is with their two voices that Brothers of Metal forged their signature sound, layering Ylva Eriksson’s bright voice over Joakim’s throaty, rasping growls. In “Emblas Saga,” as in their debut, the two work as an absolute stunning team, two voices blending flawlessly into one. It is a harmonization that never falters, though the mix tends to favor the more commercially palatable female vocals, rather than the gravelly thunder that allows the music to reach so deeply. For Joakim to keep pace with Ylva in absolutely unfaltering endurance, all while maintaining his distinct supportive vocal style, speaks to a level of skill that seems to be hidden away in the final production.

While the two vocalists seem to carry the unbreakable front to the Brothers of Metal tribe, it’s worth noting the ever-present contributions of three guitarists, never-ceasing in their presence. In bombastic and speed-fueled fourth track “Chain Breaker,” the strength of these musicians truly begins to shine as its own force of nature. Unfortunately, more often than not, the potential for these guitars to truly compliment each other gets lost in largely identical passages that rely on the trio of vocalists to carry the message of each new epic. At times, particularly in “Powersnake” and” Njord,” the impression of having eight useful musicians is entirely lost. That’s not to say that the guitars are entirely misused throughout the album, nor that the musicians wielding them are without skill: rather, their shining moments such as in “Theft of the Hammer” are rarer as a result of production that favors the narrative front.

The two standout tracks on “Emblas Saga” are “Hel” and title track “Emblas Saga,” which both excel in setting a cinematic atmosphere and making most of the cast of talented musicians that fill out their ranks. “Hel” takes a slower, methodical approach to painting a seductive and tormented picture of the goddess of the underworld, acting with sympathy and tenderness in the place of rage. Though the drums still thunder with their undying might, but the guitars proceed thoughtfully rather than with pure fire, their pace departing slightly from Ylva’s lead. This slight departure from being a perfect compliment gives the song a haunting, if not inviting, atmosphere of intrigue. Slowing the chorus and drawing out the track’s peaks until they reach the grace of a hymn, yet including segments of Mat Nilson’s guttural roars makes “Hel” one of the most artistic and unique takes on all of “Emblas Saga.”

It is in “Emblas Saga” that the sheer inspiring awe of an eight-man band truly rises to its peaks. Not only do Brothers of Metal prove that they are storytellers like no other, they bring a truly immersive experience to listeners looking for adventure. This track feels like a complete theater production, with the vocalists taking independent turns to lead the song, and at certain points all roaring together with the might of an entire army. Breaking away from verses followed by predictable choruses, the tale of “Emblas Saga” is varied in its pacing, the intensity of instruments and vocals rising in perfect time with execution of the tale’s climax. To truly appreciate the depth and subtlety that makes the song swill with such grandeur, repeated listens are a must, and are almost effortless as near flawless pacing pull the listener naturally through the song. Spanning more than seven minutes long, this is the crowning epic of a full storybook of impressive musicianship and mythology.

Aside from these noteworthy exceptions, most albums stay well within the realm of choruses meant to inspire the spirit of battle, guitar solos that blaze with equal parts restraint and calculated composition, and thrilling stories of mythical beasts. While those factors may not be damning on their own, what drives the nail in the coffin holding “Emblas Saga” back from becoming yet another revolutionary opus is the stilted, forced pacing that seems to command the structure of each track. The talent and stylistic choices that Brothers of Metal have used to forge ahead are a breath of fresh air, and create a stunning musical depth. There is no question that this is an album with both vision and ambition, and there is no skill in the execution of a finished product that is strong from start to finish. Were there to be a judgement, it would be that this is most certainly a Brothers of Metal album, and that they are well on their way to cementing this sound as one that will take them down in history as the best at what they do.

Brothers of Metal are masters of awe and might, bringing the timeless sagas of the Nordic mythos to an audience hungry for the bright and bombastic flair of power metal. Emblas Saga cements the sound that the group forged in their first album, never straying too far from the distinct sound that brought them widespread acclaim. Though not without their moments of brilliance or grandeur, ambitions seem to have sputtered out and fallen secondary to creating a polished and commercial finished product