The terrors of midnight play it safe.

When any band reaches veteran status, a certain degree of reflection becomes inevitable both among themselves and their cumulative fan base. As Top Dollar, the villain of The Crow portrayed by Michael Wincott noted during his motivational speech to his gang of arson enthusiasts, when an idea becomes an institution there is a danger of the idea getting lost. With nearly 30 years of history at their backs and their 12th studio LP unleashed, it is fairly safe to say that Brainstorm, arguably one of the most stylistically consistent members of the German power metal scene, has crossed the Rubicon from idea to institution. Naturally the question becomes, has the original spirit that has made this band an integral player in the post-80s metal revival been lost with the arrival of 2018’s Midnight Ghost.

It is with a triumphant cry that the author of this review answers this question in the resounding negative, as if anything, the spirit of heaviness, catchiness and all around good fun that has been this band’s staple since they brought in Andy Franck is still alive and well. Relative to their somewhat weak and stagnant 2016 offering Scary Creatures in its Goosebumps sense of comical, kid-friendly horror, this is more along the lines of a classic 80s flick with all the thrills and chills that made 2014’s Firesoul an outright monster of an album. Truth be told, if there is any flaw in this stellar collection of groovy, meaty, fist-pounding anthems it is that the overall formula at play here is maybe a tad bit too close to mimicking the aforementioned 2014 classic, to the point that this album could all but be dubbed its version 2.0. 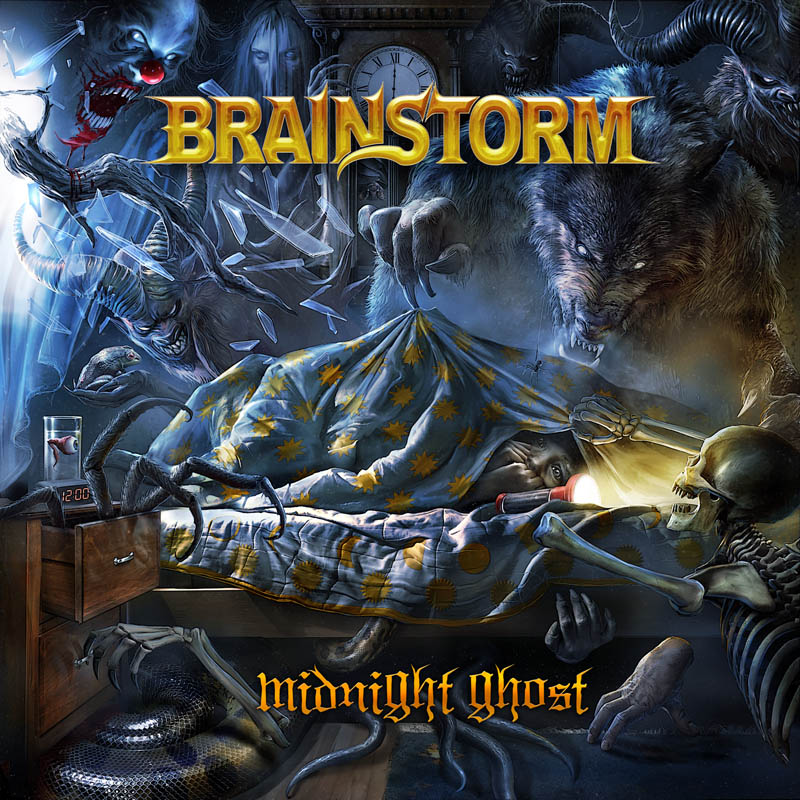 In like fashion to the album that preceded this one by four years time, any notion of a grand orchestrated prelude or extended overture are foregone for a straight for the jugular mode of almost thrashing power metal goodness. The opening song “Devil’s Eye” hits the ground on all eight cylinders, pounding the ground with an aggressive riff set and thunderous drum assault that could trade blows with the most intense moments on any Mystic Prophecy album. The ante is actually upped to actual thrash territory with the thunderous explosion of speed and riffs that is “The Pyre”, which actually turns the clock back a bit further and mimics the more intense songs that adorned this band’s seminal 2005 outing Liquid Monster. Much of the remaining songs found on here such as “Revealing The Darkness” and “Divine Inner Ghost” get fast at times, but rely more on catchy chorus fanfare and pummeling grooves to get their point across.

The standout moments that truly define this album, however, are when the band take a respite from shaking the pillars of the earth at full blast and allow some nuance to slip into the equation. The super catchy anthem with a heavier degree of keyboard presence “Ravenous Minds” recalls similar thematic territory to the superb half-ballad off their 2014 smash “Recall The Real”, definitely among the most memorable songs this band has ever churned out. But the ultimate coup de grace is the massive semi-ballad turned epic middle song “Jeanne Boulet (1764)” which takes a few well realized folksy acoustic elements and a somber atmospheric aesthetic and marry it to their skull-thumping brand of punchy riffing with a 90s Judas Priest feel goodness, coming out with something massive enough to rival Primal Fear’s “Fighting The Darkness”.

While it is well established that Brainstorm is a band that rarely disappoints, and also one whose version of a disappointing release is still an enjoyable venture, this is definitely among their better offerings. It’s maybe just a smidgeon below the latter career period crest that was Firesoul, but it hits most of the same salient points and will likewise appeal to anyone who found himself raving about said album’s metallic splendor. This isn’t a band that carved out a place for itself in the metal pantheon by reinventing the wheel, and they make no apologies for their AC/DC like adherence to what works in the songwriting department. But between Andy Franck’s attitude laced vocal display and the meaty presentation of the band behind him, genre-redefining moments are not necessary to bring home the goods.

All of the classic creatures of which nightmares are made of assemble for a familiar excursion into ballsy, familiar power metal territory, upping the ante occasionally but mostly sticking to what works