I still remember when I discovered Blues Pills as a band, listening to the “Devil Man” lyrics video on YouTube. I was immediately blown away by Elin’s voice and the a capella intro of the song. Everyone in my house loved the song, and Blues Pills became the rock band of choice for the family’s long trips, where my four daughters used to sing “Devil Man” and even learned the lyrics to other tunes and songs from their self-titled debut album.

When their sophomore album was announced and the video for “Lady in Gold” appeared in YouTube I immediately gave it an initial listen and loved it as much as I had loved the first album. Would my daughters like it? Suffice to say they learned the lyrics by ear in less than a day and practically begged me to buy the Deluxe Box edition of the record. They have been also insistently asking me to find a way to interview Elin Larsson over the phone, for them to get a chance to tell her how much they love Blues Pills’ music. Given all of the above, writing a review of “Lady in Gold” seemed like a must, hence here I am.

Blues Pills is a band that sounds like the love child of Fleetwood Mac and Jefferson Starship, but with a straight up blues rock nature at its core. When their debut EP hit the record shelves in 2012, one could feel the birth of something important, unlike the majority of vintage rock bands. The debut album followed, offering a Janis Joplin-esque psych rock that put them on the map. They managed to prove that they weren’t just a one-and-done type of act and rightfully took their place among the most interesting modern rock bands. The voice of Elin Larsson accompanied by the performance of guitarist/boy wonder Dorian Sorriaux, and of course the songwriting itself that reeked emotion, raised the level of expectations almost to an unfair point for a new band.

Putting together the follow-up to 2014’s self-titled debut has been a two-year journey for the dynamic Swedish rockers, and the result is a fresh, experimental album permeated by rich guitar, gospel elements, and a voice that’s wispy and broken one minute, raw power the next. The album marks the studio debut of drummer André Kvarnström and was recorded in analog with producer-engineer Don Alsterberg. The sound is much warmer, and the writing more varied. It’s more reliant on psychedelic R&B than bluesy hard rock. As per bassist Zack Anderson own words: “This time we went in totally open-minded, taking in a lot more psychedelia, as well as soul.” That’s a very accurate reflection that aligns with the band’s new and elevated level of sonic and spiritual freedom. 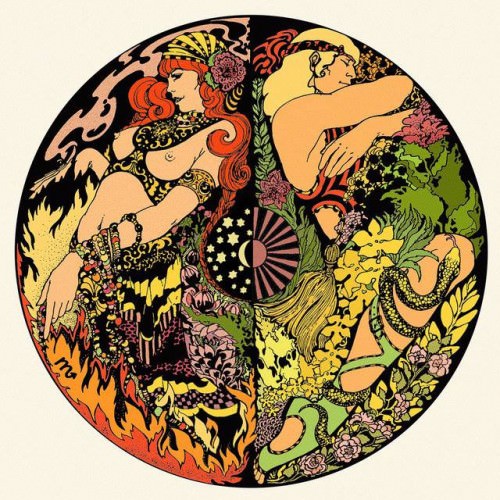 The fantastic opener – the album’s namesake “Lady in Gold” is a fast moving punchy tune, it barely kicks off before Elin Larssons’ amazingly powerful vocals dominate the track. She pushes right into the guitars and bass line before soaring above them in the dense mix; she epitomizes the power and expression in the lyrics about death as a woman. Elin is a singer who could reasonably be compared to Janis Joplin or Tina Turner, were it not for her ability to dive down the contralto range of an ice-cool voice to ‘how low can it go?’ depths, like Cher. Her powerhouse vocals immediately come to the fore, impressive as they carry so effortlessly over the band’s glorious wall of sound. There is also something very husky and sexy going on the track, it’s very 1970’s sounding psychedelic/garage rock.

“Little Boy Preacher” has the essence of a 60’s soul classic but with a definitive modern twist. It is deeper, heavier, with funky, shuffling drum backbeats, Larsson’s layered backing chorus vocals, and a stinging, fuzzed-out guitar vamp from Dorian Sorriaux. Vocally and musically excellent, elements of psychedelic gospel in keeping with the ethos of the song serve to enhance it further still. This song will get your foot tapping and your hands clapping. “Burned Out” nails that psychedelic vibe through wailing guitar, shimmering guitars and bouncy bass wobbles. The melodic guitar the tune starts with is indelibly haunting before the tempo is upped and the song melds into a faster paced rhythm. The undeniable talent of guitarist Dorian Sorriaux is best demonstrated in this fantastic track which also features some of Larsson’s most powerful vocal moments, including an unexpected falsetto and her tangible desperation which takes those searing highs to another level.

“I Felt a Change,” introduced by Larsson’s croon with a Rhodes piano and Mellotron, is an uncharacteristic ballad, weaving sweet Northern Soul and muscle rhythm & blues. With its gorgeous organ arrangement (and definitive Ray Charles’s vibe to these ears) is a fantastic song in its own right, very moving and with an amazing example of vocal strength and versatility, sending chill after chill down the spine. It also brings an evident change of pace towards mid-tempo that continues with the album highlight “Gone So Long”. This song is like a crescendo, slow burning and suspenseful, I felt like the music would break and twist into something entirely different. The glockenspiel, organ, and a slide guitar team up in a sinister, dramatic, and blues-inflected rocker, with the vocals growing ever stronger throughout the track and the percussion going heavier towards the end.

“Bad Talkers” pushes the envelope even further and may signify where the band wishes to go in the future. Larsson re-employs her grainy Joplin-inspired falsetto in the opening section, but when the band kicks, she opens up and lets it rip, powering through them. It sounds like the best Aretha Franklin song never made, and if it doesn’t have you grooving and throwing your hands up, there is no hope left for you at all. The slower “You Gotta Try” is another infectious track complemented by Kvarnström’s sharp drumming and the growl coming through Larsson’s vocals as she once again proves her caliber, ripping into those stellar high runs. She has the sort of voice that you could imagine singing pretty much anything, her voice is just so soulful and filled with emotions that you can’t help but be moved by it.

The catchy “Won’t Go Back” sets in with a bass-heavy simpler instrumentation, a throbbing rocker with a whopping and vicious fuzzed-out bass, spiky guitar, and a double-time, popping snare rave-up under Larsson’s Tina Turner-esque wailing delivery. At this point, or even at any point, there’s no doubt that Elin Larsson is the band’s spearhead. Flowing on, Zach Anderson’s driving bass intro in “Rejection” provides the pulsing power that propels this soulful rocking tune. The whole band is on fire with this song which embodies the soulful passion of Blue Pills’ nature.

The album concludes with “Elements and Things”. Similarly to their debut and “Gypsy”, Blues Pills chose to do a cover, this time around a completely reworked version of Tony Joe White’s “Elements and Things”. Fast-paced and intense from the start, Zach Anderson on bass and Andre Kvarnstrom on drums maintain a consistent background rhythm which is bordering on ritualistic. It’s impossible not to get caught in the atmospheric wave, and electro-trippy psychedelic vibe of the track, with both keyboard and guitars transitioning from clean to eerie smoothly, while Larsson’s fantastic pipes moving from soft to pure power. This track feels like it’s going to spill over into something beyond amazing… and it does.

This is a band born in the wrong era – they’d be perfectly suited to 1960s San Francisco rock scene. This second full length LP takes a slight turn from their previous LP and EPs, with the band delving into their soul and gospel influences and infusing them together with blues and psychedelia. “Lady In Gold” finds Blues Pills with more fluidity and confidence than ever, and instead of building upon their success, they decided not to play it safe and to take things into a whole new and totally unexpected plane. The songwriting is more sophisticated, diverse, and assertive, and they continue to blend their evident love affair for the glory days of psychedelic rock and soul with their own inventive melodies and hungry rhythms. With the progression they have taken, one can’t help thinking of when Deep Purple pulled a similar move with Stormbringer, where the funk and soul elements of vocalist David Coverdale and Bassist/Vocalist Glenn Hughes became more prominent.

This is an exceptional follow up album which finishes as it started: showcasing relentless energy and channeling some dark, soulful, powerful, and yet beautiful influences by also turning them into something spectacular. This is definitely a band that is going places, I can only hope that one of those will be the US. Highly recommended.