On March 20 at 7:30 p.m. PT, legendary Swedish guitarist Yngwie Malmsteen will take part in a one-night only exclusive livestream event — complete with full, live band — from the entertainment capital of the world, Las Vegas, Nevada.

Yngwie Malmsteen was born in Stockholm, Sweden, on June 30, 1963. Applying his intense curiosity and tenacity to first an old Mosrite and then a cheap Stratocaster, Yngwie immersed himself in the music of such bands like Deep Purple and spent long hours practicing to learn their songs. His admiration for Ritchie Blackmore‘s classically influenced playing led him back to the source: Bach, Vivaldi, Beethoven, and Mozart. As Yngwie absorbed the classical structures of the masters, his prodigious style began to take shape.

By age 10, he began to focus all his energies on music. His mother and sister, the latter a talented flautist, recognized his unique musical gifts and gave him support and encouragement. His mastery of the instrument progressed rapidly. In his early teens, Yngwie saw a television performance of Russian violinist Gideon Kremer, who performed the highly difficult 24 Caprices of 19th-century virtuoso violinist Niccolo Paganini. The effect was profound, and Yngwie understood at last how to combine his love of classical music with his burgeoning guitar skills and onstage charisma.

Yngwie‘s first solo album, “Rising Force” (now considered the bible for neoclassical rock) made it to #60 on the Billboard charts, an impressive feat for a mostly instrumental guitar album with no commercial airplay. The album also gained Yngwie a Grammy nomination for best rock instrumental performance. He was voted “Best New Talent” in several readers’ polls, “Best Rock Guitarist” the year after, and Rising Force became “Album of the Year”. Rising Force blazed a trail on the concert circuit that established Yngwie as one of rock guitar’s brightest new stars and added a new genre to the music lexicon: neoclassical rock.

With his place in guitar history firmly established, Yngwie‘s neo-classical compositions fueled the ears of fans and the ambitions of aspiring guitarists worldwide for over a decade with such powerhouse classic albums as “Marching Out”, “Trilogy”, “Odyssey”, “Live in Leningrad / Trial By Fire” (gold-selling concert video of Yngwie’s 1989 sold-out concerts in Moscow and Leningrad), “Fire & Ice” (which debuted in Japan at #1 and sold over 100,000 copies on the day of its release), “The Seventh Sign”, “Magnum Opus”, “Inspiration” (covering the music of Deep Purple, Rainbow, U.K., Kansas, Scorpions, Rush, and Jimi Hendrix), “Facing the Animal”, “Alchemy”, and “Attack!!”

Yngwie‘s latest album, “Blue Lightning”, came out in March 2019 via Mascot Label Group. On the disc, Yngwie paid homage to those from the blues world who have fueled his artistic spirit for so long. “Blue Lightning” also included four original tunes that bring to the fore Malmsteen‘s love for the blues. 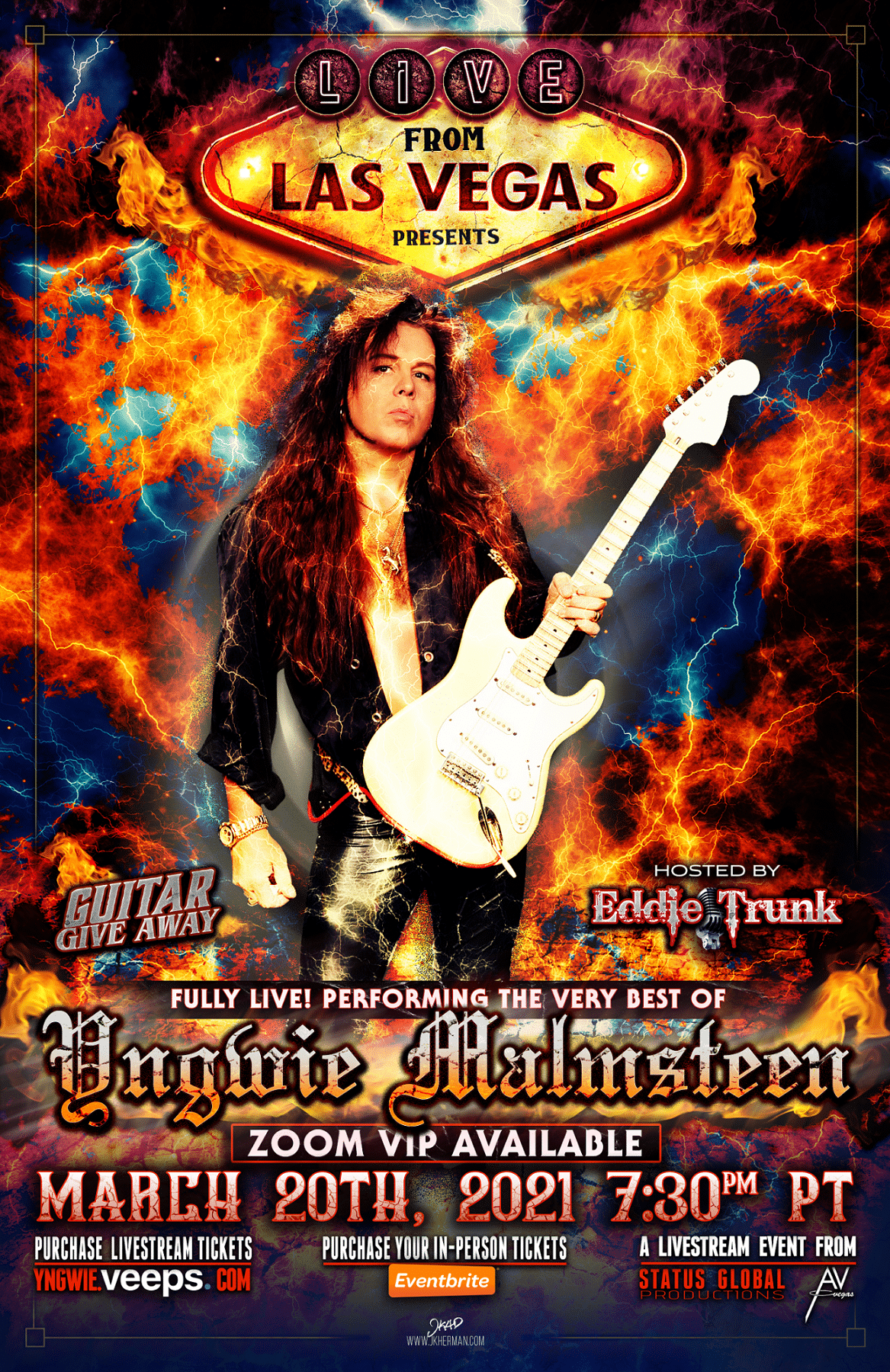