UFO just wrapped the initial North American leg of the “Last Orders” tour, but fear not, the tour is not over yet and the band is pleased to announce new North American tour dates for 2020. These shows kick off February 13 in Medina, Minnesota and run through March 2. Included in this run is a co-headline gig with BLUE ÖYSTER CULT and an appearance on the “Rock Legends” cruise.

The British rock legends have been rejoined by Neil Carter as they continue their 50th-anniversary “Last Orders” tour following the recent passing of Paul Raymond, who died from a heart attack on April 13, just days after UFO completed the U.K. and Ireland leg of “Last Orders” tour with a sold-out show at London’s Shepherd’s Bush Empire.

Raymond was recruited by UFO in 1976 to replace the band’s first keyboardist, Danny Peyronel. When Michael Schenker left UFO, Raymond joined Schenker‘s MICHAEL SCHENKER GROUP and later hooked up with Pete Way in WAYSTED. He appeared on more than a dozen of UFO‘s albums, including “Lights Out” and the live classic “Strangers In The Night”.

Neil was previously in UFO between 1981 and 1983, having played on the albums “The Wild, The Willing And The Innocent”, “Mechanix” and “Making Contact”. Before he joined UFO, he was in WILD HORSES, and he later continued his career with Gary Moore.

In a statement, UFO said: “On April 13th 2019, the UFO family got the tragic news that our bandmate Paul Raymond had died of a heart attack. It had been just a week since we finished the first leg of our ‘Last Orders’ tour in the U.K. While mourning his loss, sadly we also had to face the reality of what to do with the band. We feel moving forward with the tour is the right thing to do. We all know this is what Paul would have wanted us to do. We are therefore very pleased to announce that our friend and former bandmate Neil Carter has agreed to join us again and take over the keyboards/guitar and vocals slot for the remainder of the tour. Neil was already part of the family between 1981 and 1983, playing on the albums ‘The Wild, The Willing And The Innocent’, ‘Mechanix’ and ‘Making Contact’. Before he joined UFO, he was in WILD HORSES, later he continued his career with Gary Moore. Together with Neil, we will bring our 2019 ‘Last Orders’ tour to a close. We want to make sure that all our amazing fans get a fantastic experience out of it one more time.”

While many veteran bands in such a position simply cease playing live and continue to record, UFO will no longer be releasing new music. The covers collection “The Salentino Cuts” (2017) is set to become a signing-off point. 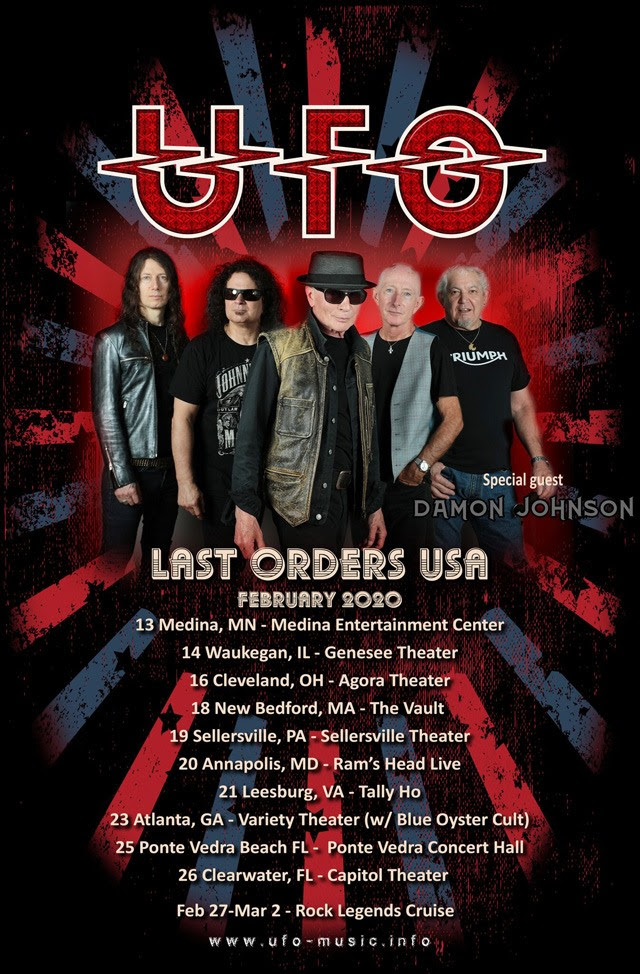