As announced previously and after spending the last weeks sharing some various audio excerpts from the effort, the Swiss instrumental stoner-metal/sludge-rock power-trio SIX MONTHS OF SUN just released its second full-length effort “Below The Eternal Sky” for CD, LP & Digital editions through Cold Smoke Records, GPS Records and Urgence Disks.

In addition to the official release-news, the whole album, produced by Serge Morattel @ Rec Studio (Cortez, Knut, Impure Wilhelmina, Shora…), is also available right now for full-stream on Bandcamp and YouTube with the support of Score A/V Digital & the Stoned Meadow Of Doom YT Channel.

Stream the entire album on Bandcamp | Get your CD/LP/Digital copy on the Cold Smoke webstore. 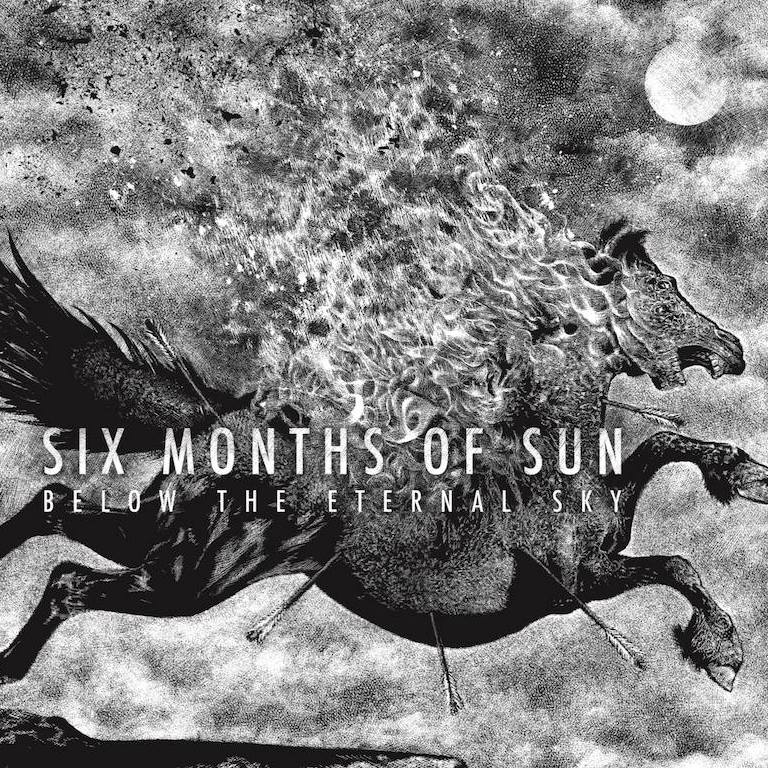 “Below The Eternal Sky” Album Artwork

SIX MONTHS OF SUN is an instrumental stoner metal band who are not so much influenced by jazz and fusion as they are by SABBATH & ZEPPELIN. In fact, a guitar, a bass and a drum are the only essentials to deliver heavy riffs and groovy tunes. The band was born in summer 2009 in the haze of a dark cave in Geneva (Switzerland). Cyril, Christophe and Daniel, after tremendous jamming, began to write Stoner songs. Despite having two singers in the band, they decided to create instrumental compositions to give more space to the music, and simply because it was so much fun playing stoner songs altogether.

After supporting FU-MANCHU, RED FANG, SAVIORS & KARMA TO BURN, “And Water Flows”, a 12” LP, was recorded at Wood Studio with Raphael Bovey & Stéphane Kroug. Mixed and mastered by Stéphane Kroug, this album has been released through GPS Prod and Urgence Disk labels in November 2013. Now – and after a digital single “Dragon Hunter” released in 2015 – SIX MONTHS OF SUN are presenting their compositions in live and prepares the release of its second album.