InsideOutMusic, the leading light in today’s progressive rock scene, is celebrating their 25th anniversary of being a label in 2018, in what will be one of their biggest and busiest yet. To coincide with this, two of their longest serving artists, SPOCK’S BEARD and Roine Stolt’s THE FLOWER KINGS, will head out on a European co-headline tour in Winter 2018.

Spock’s Beard comment: “Spock’s Beard is excited to announce an upcoming Winter tour!  It will be a co-bill with Roine Stolt’s THE FLOWER KING’s revisited band, so each show promises to be a great evening of music.  We’ve been getting a lot of questions about who will be playing drums on this tour, so at this time let me introduce our new touring drummer, Mr. Mike Thorne, from SAGA!  We are really excited to have him on board and are looking forward to seeing you on tour.”

Roine Stolt adds: “Asked to put together a band  to go on the road, celebrate our label Inside Out’s 25 year anniversary – I was thinking of the ‘treasure’ that is the music I wrote for THE FLOWER KING during that same period. I felt compelled to bring out this music for yet another round – and in the process bring in some old friends and some new.
The music is universal – some songs timeless – and by November I hope to have an exciting set-list – to not only celebrate my 1st album and the origin of all things  “The Flower King” – but to cover the rest of THE FLOWER KING‘s history – and eventually a new tune & a few new faces. Tune up the engine – Time to prog!”

You can find the full list of dates below: 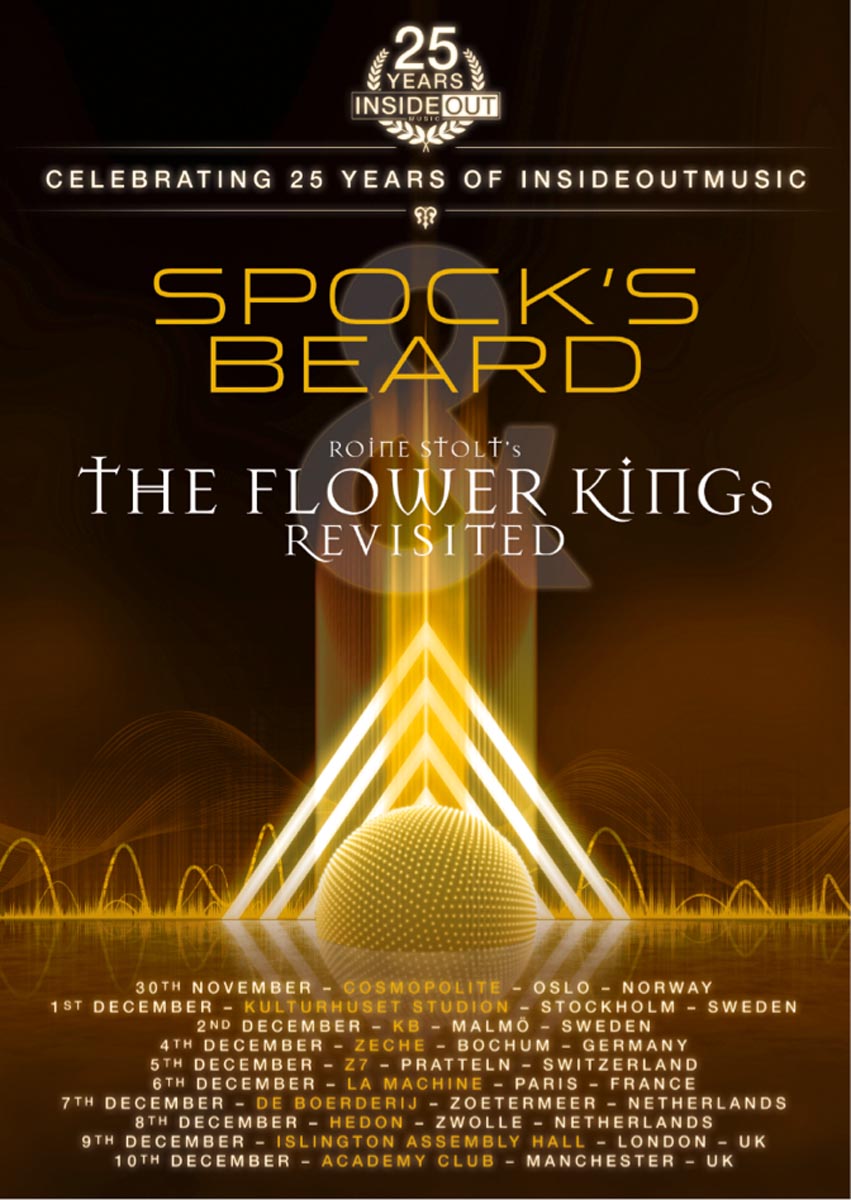 Formed back in 1993 in Kleve, Germany, the label made their name with acts such as ENCHANT, SPOCK’S BEARD, SYMPHONY X & THE FLOWER KINGS, many of whom they still work with now – a rarity in this day and age. Since that time, the label has played a key & continued role in the survival and resurgence of progressive rock in recent years, and has always prided itself on shining a light on leftfield music. Now the band count some of the biggest & most exciting bands amongst their roster, including DREAM THEATER, STEVE HACKETT, DEVIN TOWNSEND, SONS OF APOLLO, KANSAS, HAKEN, RIVERSIDE, LEPROUS & more. On the label’s 20th anniversary back in 2013, one of the labels founders, and current label-head Thomas Waber was given the Guiding Light award at the Progressive Music Awards, praising his aforementioned role in the continued celebration of progressive rock.

This year will also see InsideOut release a whole host of lavish catalogue releases throughout 2018, including the second part of THE FLOWER KINGS ‘A Kingdom of Colours’ CD boxsets, a series of DEVIN TOWNSEND high-end vinyl boxes, a CD collection covering the whole of ENCHANT’s illustrious career, and much more yet to be announced.