At midnight on Saturday June 6, for the first time since its theatrical and DVD release last November, the motion picture “Slayer: The Repentless Killogy” will make its Video On Demand debut. The release is in celebration of  “International Day Of Slayer,” the annual heavy metal holiday that commemorates the uncompromising, loud and defiant music of the iconic thrash metal band SLAYER. Since the holiday’s inception 18 years ago, every June 6, SLAYER fans have staged a “Slay-out,” skipping work or school in favor of spending the day listening to SLAYER at nuclear blast level, in their car, at home, or the public place of their choice. However, this year, to make sure every SLAYER acolyte stays lean and mean, the “International Day Of Slayer” can be saluted in the privacy and comfort of your own home — a “Slay-In.” As part of the celebration, the feature film will premiere at the special rate of $6.66 USD for one week, with 50% of the proceeds, donated on behalf of SLAYER, Nuclear Blast and Global Merchandising Services, earmarked for Live Nation‘s Crew Nation charity to help support live music road crew members who have been directly impacted as a result of COVID-19.

Part one of “Slayer: The Repentless Killogy” motion picture was written and directed by BJ McDonnell, who conceived and directed the three brutal music videos — “You Against You”, “Repentless” and “Pride In Prejudice” — for SLAYER‘s final studio album “Repentless” (2015). The film opens with the three music videos assembled as one chronological story-line, and then segues into a present-time narrative written and filmed especially for this motion picture. Part One stars many of the actors who appeared in the original video series: Jason Trost (“Beats of Rage”, “Hatchet III”), as Wyatt, Danny Trejo (“Machete”, “From Dusk Til Dawn”), Richard Speight (“Band of Brothers”, “Supernatural”), Derek Mears (“Agents Of S.H.I.E.L.D.”), Jessica Pimentel (“Orange Is The New Black”), Tyler Mane (“X-Men”, “Halloween II”), Bill Moseley (“The Devil’s Rejects”, “The Texas Chainsaw Massacre 2”), Caroline Williams (“The Texas Chainsaw Massacre 2”, “Sharknado 4”), and Sean Whalen (“Twister”, “The People Under The Stairs”).

Part two features SLAYER‘s entire live set performed at the Los Angeles Forum on August 5, 2017 and was directed by Wayne Isham who has directed videos for artists including METALLICA, FOO FIGHTERS, Michael Jackson, Kelly Clarkson and Britney Spears. Presented in front of one of the most striking stage productions of the band’s career, SLAYER performs fan favorites including “South Of Heaven”, “War Ensemble”, “Mandatory Suicide”, “Dead Skin Mask”, “Raining Blood” and “Angel Of Death”.

For the “Slayer: The Repentless Killogy” feature, the band — Tom Araya, Kerry King, Gary Holt and Paul Bostaph — was filmed discussing the “Repentless” album, SLAYER fans, being a member of the “Big Four,” and more on “A Prequel to Slaying…” available here. 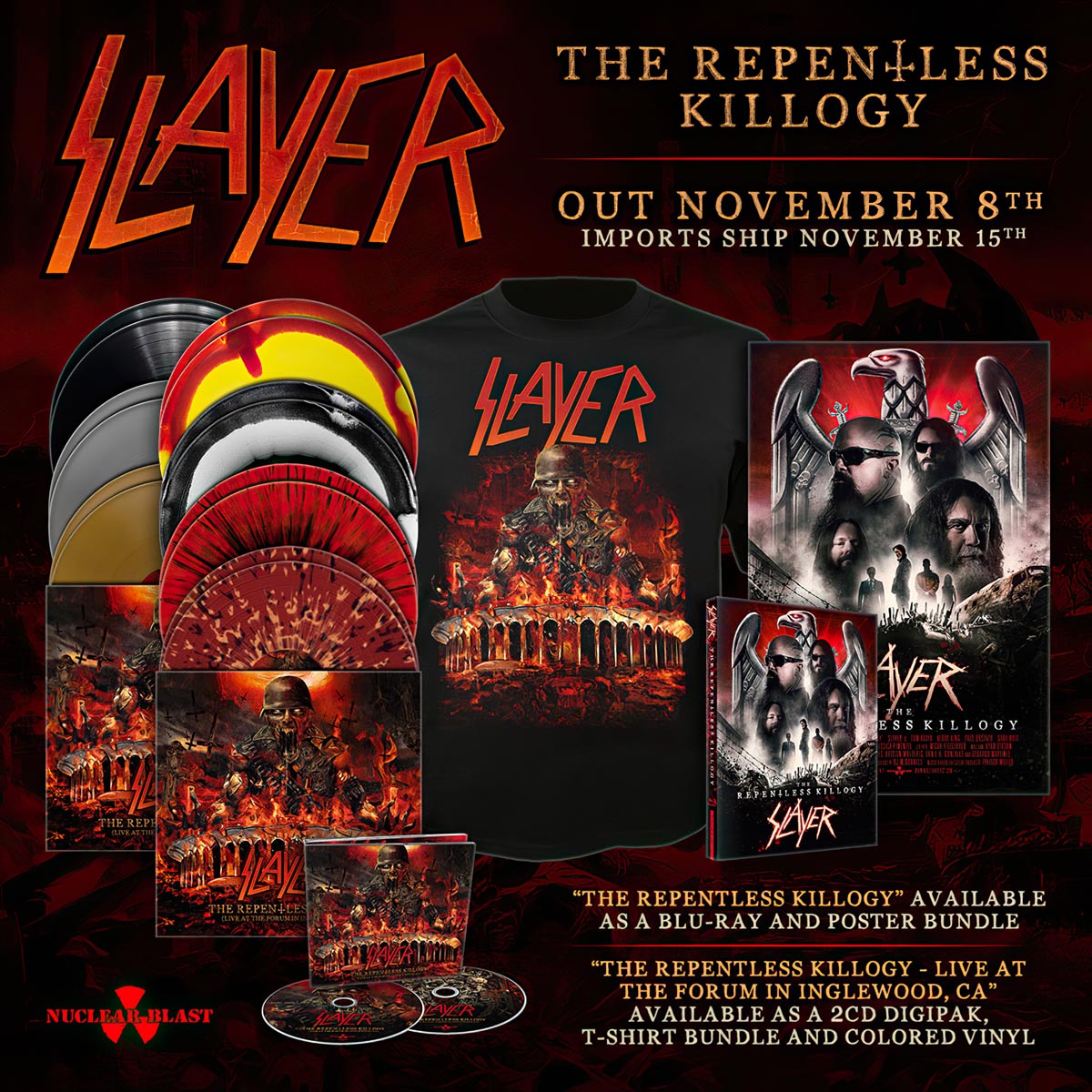