SLAYER will set off on The Final Campaign, the seventh and final leg of its farewell world tour. This last hurrah will start at the Explore Asheville Arena in Asheville, North Carolina, and see the band taking its goodbye bow at the Los Angeles Forum on Saturday, November 30. Accompanying SLAYER for this last ride are PRIMUS, MINISTRY and PHILIP H. ANSELMO & THE ILLEGALS performing a vulgar display of PANTERA, who will support on all dates. Tickets go on sale this Friday, July 12 at 10 a.m. local; limited VIP packages will be available.

SLAYER‘s final world tour began on May 10, 2018 with the band’s intention to play as many places as possible, to make it easy for the fans to see one last SLAYER show and say goodbye. By the time the 18-month trek wraps on November 30, the band will have completed seven tour legs plus a series of one-off major summer festivals, performing more than 140 shows in 30-countries and 40 U.S. states.

The Slatanic Wehrmacht pre-sale begins TODAY, JULY  9 at NOON local venue time. If you are an existing member and have already used your four (4) ticket limit, you WILL be able to purchase up to four more tickets for this tour. Current members, log in to slatanicwehrmacht.com to get your unique pre-sale password. 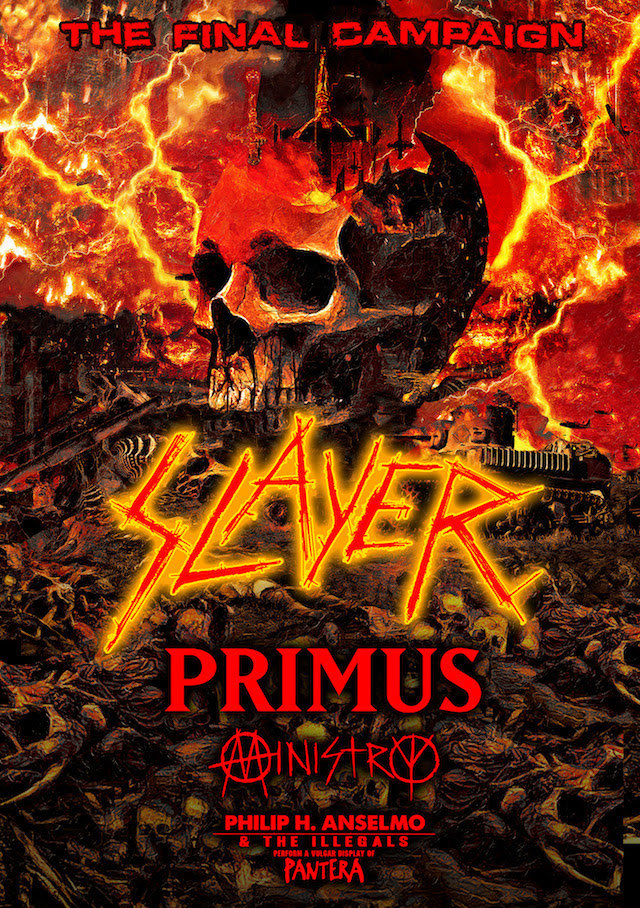 SLAYER bassist/vocalist Tom Araya talked about his possible retirement in a 2016 interview with Loudwire. He said: “At 35 years, it’s time to collect my pension. [Laughs] This is a career move.” He continued: “I’m grateful that we’ve been around for 35 years; that’s a really long time. So, yeah, to me, it is. Because when we started off, everything was great, because you’re young and invincible. And then there came a time where I became a family man, and I had a tough time flying back and forth. And now, at this stage, at the level we’re at now, I can do that; I can fly home when I want to, on days off, and spend some time with my family, which is something I wasn’t able to do when [my kids]were growing up. Now they’re both older and mature. So now I take advantage of that.” Araya added: “Yeah, it just gets harder and harder to come back out on the road. 35 years is a long time.”

Tom also revealed another reason for his diminished enjoyment of the touring life. He said: “There’s things that have gone on in my life that have made me change how I play as a bass player. I had neck surgery, so I can’t headbang anymore. And that was a big part of what I enjoyed doing what I do — singing and headbanging. I liked knowing that I was one of the fucking badass headbangers. That played a big part. Now I just groove with the music, which is cool, because I’m grooving with the music and the feel of the songs, so that’s changed a little for me.”