Slay At Home, a first of its kind virtual metal music and art festival organized by Frank Godla of Metal Injection, is set to air this Friday and Saturday (May 29th & 30th) beginning at 3PM EST. The event will fund-raise in support of two great charity organizations; Musicares and Global Giving. A video trailer with the lineup can be seen below.

The completely free event will be an artfully curated live-stream show with exclusive never-before-seen performances from over 30 bands, cover song collaborations, commissioned music from artists that will debut at the fest, special guest appearances, art installations and much more!

The official schedule has now been released via the festival website, and is broken into hourly groups, with organizer Frank Godla explaining the set up:

“By keeping the set times between 5 and 15 minutes for each artist, it allows me to not only keep things moving, but mix it up in ways that conventional festivals simply can’t. Every single hour will contain big names and emerging artists right next to each other. I’m trying to look at the bright side of our current situation, and not only make this an entertaining way to see the artists you love flex their creativity in new ways, but hope this event acts as a place of discovery for every viewer out there. Finding a band or artist to fall in love with is the mark of a great festival to me, and it’s my honor to share the work of these amazing individuals I curated because I’m passionate about them. I’ve been in touch with all of them every step of the way, and some even managed to throw me a few surprises. I’m honored and humbled to have all of them part of this, they truly went above and beyond to showcase their craft for the Slay At Home fest, and I can’t wait for the world to see something really special come to life this weekend.”

The free livestream is scheduled for 3PM EST both days in an effort to raise funds for the MusiCares Covid-19 Relief Fund helping artists, crew and industry workers during financial crisis, as well as the Global Giving Coronavirus Relief Fund, an organization helping front line workers in need during the crisis. See the listings below for details, as well as the festival website. 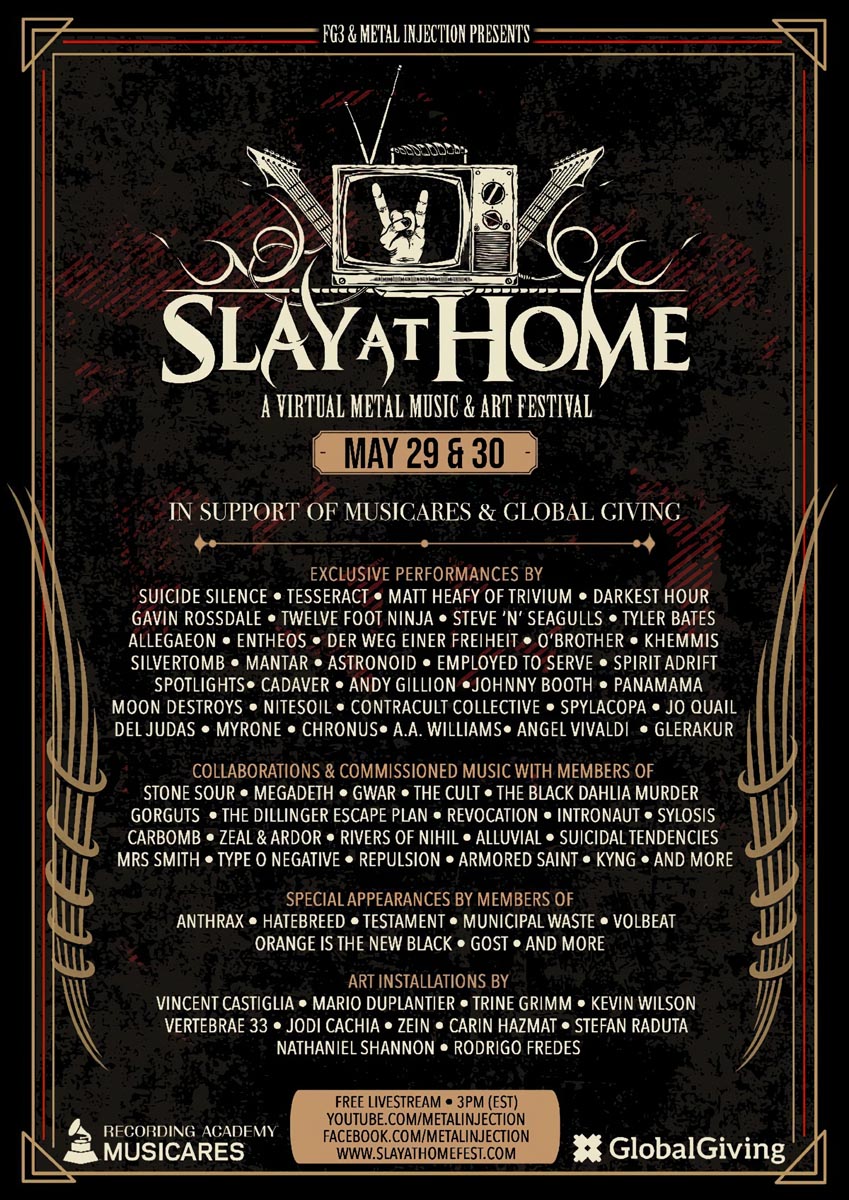 You can find the live-stream on any device you own at Metal Injection’s YouTube and Facebook pages, and by the direct links below.

The festival will include never before seen performances from:

Commissioned music created to debut at the festival including performances from:

Cover collaborations with performances by: