Welsh raga punks SKINDRED has announced its return to North America in support of its new album, “Big Tings”, which features the active rock radio smash “That’s My Jam”. The trek kicks off September 26 in Jacksonville, Florida and runs through October 12 in Tempe, Arizona. Support on the tour will come from SUMO CYCO and RAVEN BLACK.

The band are eagerly anticipating their return: “We are blown away by the success ‘That’s My Jam’ is currently having in America,” SKINDRED said in a statement. “It’s heartwarming that our once second home is once again opening its arms to SKINDRED. This North American tour is so exciting for us, we can’t wait to spread “Big Tings” across the land and so say all of us, Let’s Dred into America!”

The overwhelming response doesn’t stop there as Big Tings has garnered some of the band’s best reviews to date, from critics and fans alike: “Big Tings the follow-up to 2015’s Volume, is a magnificent beast churning out heavy, distortion-laden riff punches melting into vocalist Benji Webbe’s frenzied rapping. Explosive rock, metal and punk material rubs shoulders with smooth melodies – and of course Skindred wouldn’t leave us on the dance floor without a hefty helping of their trademark Godzilla-huge choruses” 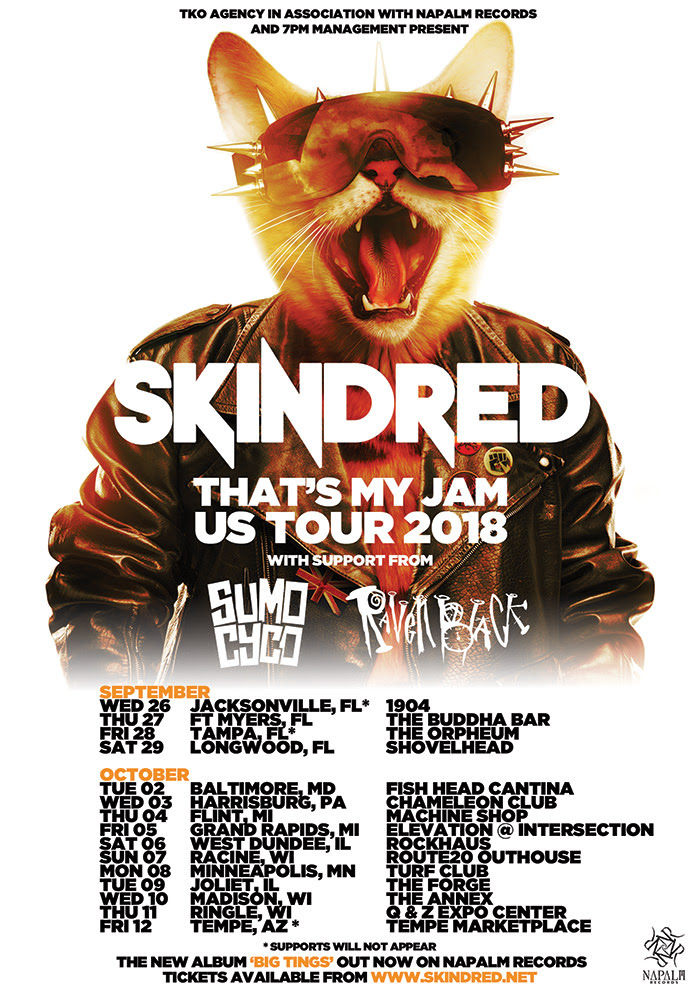 * No SUMO CYCO and RAVEN BLACK

Big Tings was released on April 27 via Napalm Records. The disc was recorded at Peter Gabriel‘s Real World studio in the village of Box, Wiltshire, England. The band  recently released a music video for its “Machine” single. The clip features actor and stuntman Neil Chapelhow, best known for his work in the films “Wonder Woman” and “Fantastic Beasts”. “Machine” – which video can be seen below – features vocals by REEF frontman Gary Stringer and guitar by Phil Campbell of MOTÖRHEAD. The track was previously used as both the intro and outro theme to AC/DC frontman Brian Johnson‘s TV show “Cars That Rock”.