Serj Tankian has unveiled a lyric video for the song “Your Mom“. The clip was directed by artist and animator David Bradford, who has worked with Tankian on solo projects as well as projects with SYSTEM OF A DOWN.

Bradford explains his concept for the “Your Mom” clip: “As I listened to the beginning of the song, with the more mellow acoustic guitar, I envisioned a brave bird flying over a countryside, unaware of the danger waiting in the ashen, war-torn lands ahead. This didn’t stop the bird from gliding into danger and took the form of ‘Your Mom’. As the fighters continue their campaign of destroying the Earth with their bombs and chaos, the mom summons the strength from her connection to Mother Earth and becomes the personification of justice against the fighters. She kicks their asses and returns to the form of a bird, perched on the carcasses of the destroyers and restores the Earth’s balance.”

“Your Mom” is the third song from Tankian‘s five-track EP “Elasticity” to receive a visual accompaniment, with the Los Angeles- and New Zealand-based musician previously releasing both the Vlad Kaptur-directed video for “Elasticity” and the politically charged “Electric Yerevan” video.

“Elasticity” is available now digitally and on CD, with the galaxy-colored vinyl version of the album arriving on April 30. A collection of autographed, and limited-edition “Elasticity”-themed merchandise can also be found on the Tankian webstore.

Regarding how the idea for “Elasticity” came about, Serj said “When I conceived possibly doing another record with the guys from SYSTEM OF A DOWN a few years back, I started working on a set of songs that I arranged in rock format for that purpose,” Serj explains. “As we weren’t able to see eye to eye on the vision going forward with an SOAD album, I decided to release these songs under my moniker.” With his trademark eclecticism and one-of-a-kind vocal style, Serj delivers a collection that runs the gamut from hard-driving, electronically enhanced anthems like the title track, a rallying cry for his beloved Armenia (“Electric Yerevan”), the tongue-in-cheek political mash-up of “Your Mom”, the piano-laden “How Many Times?“ and “Rumi”, a song that Serj wrote both about his son Rumi and Rumi the poet.

“Elasticity”‘s title is a play on SYSTEM‘s massive 2001 album “Toxicity”. Serj told SPIN: “I‘m gonna call it ‘Elasticity’ just because I wanted to do it with SYSTEM and it didn’t happen. For me, it’s not ‘Toxicity’ but it is ‘Toxicity’. [Laughs]”

SYSTEM OF A DOWN hasn’t released a full-length album since the “Mezmerize” and “Hypnotize” LPs, which came out in 2005.

In 2018, guitarist Daron Malakian publicly accused Tankian of not wanting to record, with Tankian responding that creative and financial issues with Malakian led to the stalemate. In a message on Facebook, Tankian wrote that Malakian wanted to control SYSTEM‘s creative process, take more of the publishing money and be the only band member to speak to the press. 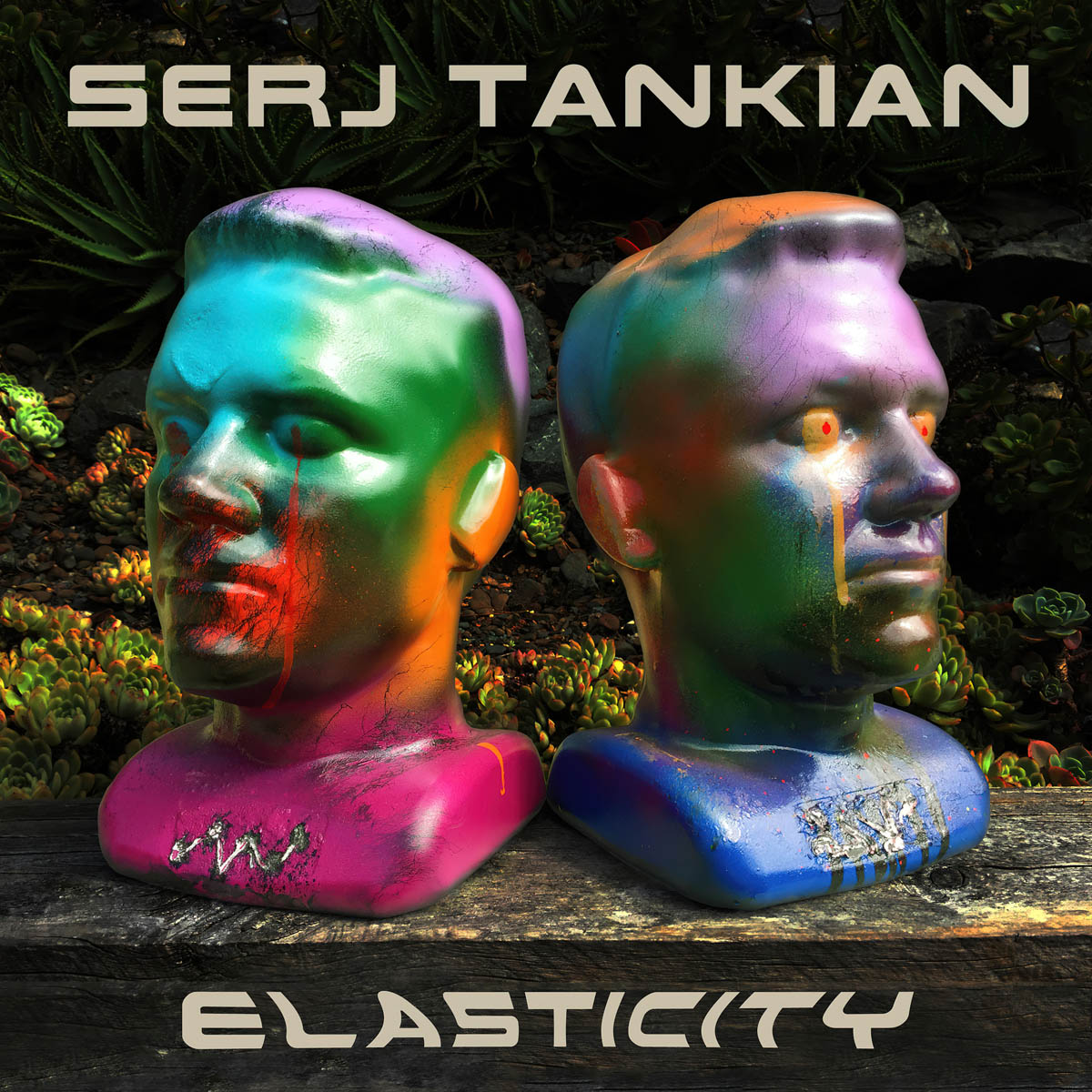 A singer, poet, songwriter, visual artist, film producer, activist, and composer, Tankian has always created music as an outlet to express his thoughts and feelings with a level of passion and consciousness that few in today’s world of music can rival. An Armenian born in Lebanon and re-rooted in Los Angeles, Tankian was introduced to the melding of cultures, ideas, and ideals from a very young age. The principles learned from this integration and adaptation have led to his understanding of the oneness of all things and have since maneuvered and transfigured into the music and art that he lives to create. As the lead singer and songwriter for SYSTEM OF A DOWN, Serj has released five studio albums, winning a Grammy Award in 2006 for “B.Y.O.B.” and selling over 40 million albums worldwide. Despite this success, Serj has never grown complacent with his art, always striving to open up new channels of sound and arrangement to articulate his artistic expressions. He has released five albums of solo material, beginning with 2007’s chart-topping hard rock album “Elect The Dead”. His sophomore solo album, “Imperfect Harmonies”, was released in 2010, followed by “Harakiri” in 2012. 2013 saw two distinct releases from Serj, the first being the critically acclaimed “Orca Symphony No. 1”, released in June of that year, followed up with the very unique “Jazz-Iz Christ” one month later.

Over the past few years, his time spent in the recording studio has been focused on creating musical scores and compositions for film and video game projects. Serj recently lent his vocals to a modern-day cover of BLUE ÖYSTER CULT‘s rock classic “Godzilla” for the blockbuster Michael Dougherty film “Godzilla: King Of The Monsters”. He also recorded a modern version of the Armenian folk song “Sari Siroun Yar” along with the Authentic Light Orchestra for the film “The Promise”, directed by Terry George and starring Christian Bale and Oscar Isaac. Serj was also brought on by Survival Pictures, the producers of the film, to serve as an executive music consultant.

Most recently, Tankian composed the full musical score for award-winning documentary “I Am Not Alone” directed by Garin Hovannisian and the upcoming Live Nation Productions film “Truth To Power”, which chronicles Serj‘s own journey through the crossroads of music and activism. In 2017, Serj composed music for Emmy-nominated “Intent To Destroy”, a gripping film directed by award winning documentarian Joe Berlinger. That same year he created an intense score for the epic Russian action film “Furious – The Legend of Kolovrat”, followed by his 2018 musical score for award-winning film “Spitak”, directed by Alexander Kott. Additionally, Tankian composed the full musical score for independent films “1915” and “The Last Inhabitant”, an original composition for Ilya Naishuller‘s “Hardcore Henry” and video game musical scores for “Midnight Star” and its sequel, “Renegade”, which were created by one of the chief architects of the famed “Halo” game franchise.

Serj‘s resume also includes the formation of a record label, Serjical Strike Records (established in 2001), which has released albums from many critically acclaimed artists, including FAIR TO MIDLAND, Buckethead and DEATH BY STEREO.

Along with fellow musician Tom Morello (RAGE AGAINST THE MACHINE, AUDIOSLAVE), Serj co-founded the non-profit organization Axis Of Justice in 2002, which strives to bring together musicians, music fans and grassroots political organizations to fight for social justice. He has also dabbled in the world of broadcasting as co-host of the Axis Of Justice Radio Network, which can be heard via SiriusXM and KPFK in Los Angeles. With a mission of spreading diversity and understanding through music, poetry and activism, Serj will continue to surprise and enlighten those who listen to his music and hear his words.

In recent years, Tankian has split his time between holding a mic and a paintbrush, having feverishly created over 60 pieces of art since 2013. His journey into the world of fine art began with his “Disarming Time Musical Paintings”, which were exhibited at Project Gallery in Los Angeles. Since then, he has had multiple exhibitions at galleries in both the United States and New Zealand. In 2015, his artwork was exhibited at the grand opening of New Museum Los Gatos in Northern California as part of a group exhibit that ran from May through September of that year. Most recently, Serj‘s artwork was exhibited at two notable galleries in New Zealand during February and March of 2019.