SEETHER is celebrating the release of its highly anticipated eighth studio album, “Si Vis Pacem, Para Bellum” — its first in three years — with an epic global live-stream event to be held Sunday, August 30 at 3 p.m. ET in an exclusive partnership with Veeps and Elite Multimedia.

“Locked & Live” marks the band’s first-ever full production, multi-camera online live-stream concert event and gives fans around the world the chance to see a notoriously energetic SEETHER live show from home while tours remain paused. The setlist promises to include classic favorites as well as brand-new tracks from “Si Vis Pacem, Para Bellum” (“If You Want Peace, Prepare For War”), due August 28 via Fantasy Records.

Ticket packages are on sale now at Seether.Veeps.com.

“We are extremely proud and excited for the release of our 8th studio album ‘Si Vis Pacem, Para Bellum’,” says SEETHER. “Let’s all get together to celebrate despite the current state of our world. Everyone is hurting from the pause of live music, so we’re here to bring you guys an exclusive live-stream concert experience. This is our first-ever full production, multi-camera live-stream concert event during lockdown. We will be playing songs off the new album as well as a selection of some of your favorite tracks. This show will bring the full live experience into your living room. Make sure you join us on August 30th!” 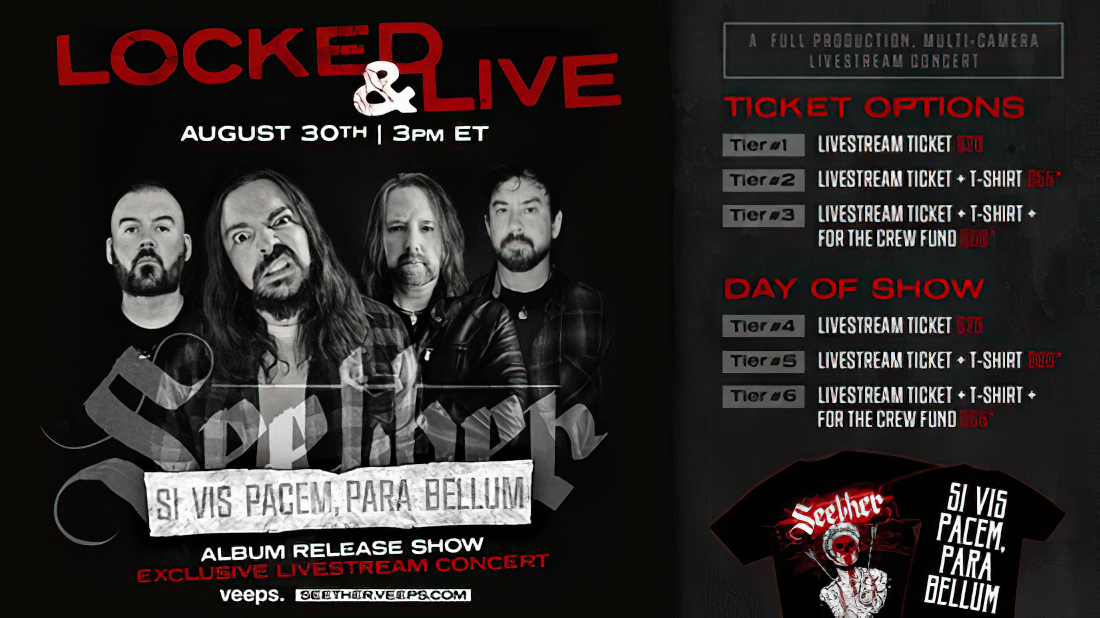 In addition to several ticket packages providing donations to a fund set up for SEETHER‘s crew, the band will also offer a donation button during the broadcast for SAVE (Suicide Awareness Voices Of Education). Those interested in donating to SAVE before or after the event can do so here.

“Si Vis Pacem, Para Bellum” is SEETHER‘s eighth studio album and was produced by front-man Shaun Morgan and engineered and mixed by Matt Hyde (DEFTONES, AFI) in Nashville from December 2019 through January 2020. The album’s 13 new tracks draw on the dark and raw honesty of grunge’s epic guitar attack and the South African underground punk and metal that Morgan (and band-mate Dale Stewart) grew up on.

SEETHER is joined on the album by newest member, Corey Lowery (ex-guitarist/vocalist for SAINT ASONIA and STUCK MOJO), Morgan‘s friend of 16 years, who also assistant-engineered the album.

“Corey has a lot of experience and is an inspiring guitarist as well; he’s the older brother I’ve always wanted,” Morgan said.

On Friday August 14, SEETHER released the brand-new song and video for “Beg”, the third preview track from the new album. Previously the band released “Bruised And Bloodied” and the first official single, “Dangerous” which has made an immediate impact at rock radio and is currently No. 7 on Billboard’s Hot Hard Rock Songs chart.

For the week of August 1, Morgan also topped Billboard‘s Hard Rock Songwriter’s chart and claimed the No. 2 spot on the Hard Rock Producers chart for the first time.