SCORPIONS have announced the rescheduled dates for their “Sin City Nights” Las Vegas residency. The run of shows, which was originally slated to take place this month, will now happen next May at Zappos Theater at Planet Hollywood Resort & Casino. SCORPIONS will be joined by special guests QUEENSRŸCHE.

All tickets will be honored for the new dates. If you are a ticket-holder and cannot make the new show date, you will receive an e-mail from your ticket provider, or you can visit livenation.com/refund.

“We are very excited to finally come back to Vegas in May 2021 for a nine-show residency at Planet Hollywood Resort & Casino’s Zappos Theater,” said singer Klaus Meine. “We’re looking very much forward to share some wild ‘Sin City Nights’ with all of you on the famous Strip … Let’s get ready for the Sting!!!!”

SCORPIONS previously played a Las Vegas mini-residency in May 2016, consisting of five shows at The Joint at the Hard Rock Hotel & Casino.

The band’s longtime agent Rod MacSween recently told Pollstar that SCORPIONS will embark on “a full-blown USA run” in 2021.

SCORPIONS are currently working on a new studio album. Tentatively due in 2021, the disc will mark the German hard rock legends’ first release since 2017’s “Born To Touch Your Feelings – Best Of Rock Ballads”, which was an anthology of SCORPIONS‘ new and classic material.

SCORPIONS‘ last full-length collection of new recordings was 2015’s “Return To Forever”, partially comprising songs the band had in the vault from the ’80s. It was the final recorded appearance of SCORPIONS‘ longtime drummer James Kottak, who was dismissed from the band in September 2016. He has since been replaced by Mikkey Dee, formerly of MOTÖRHEAD. 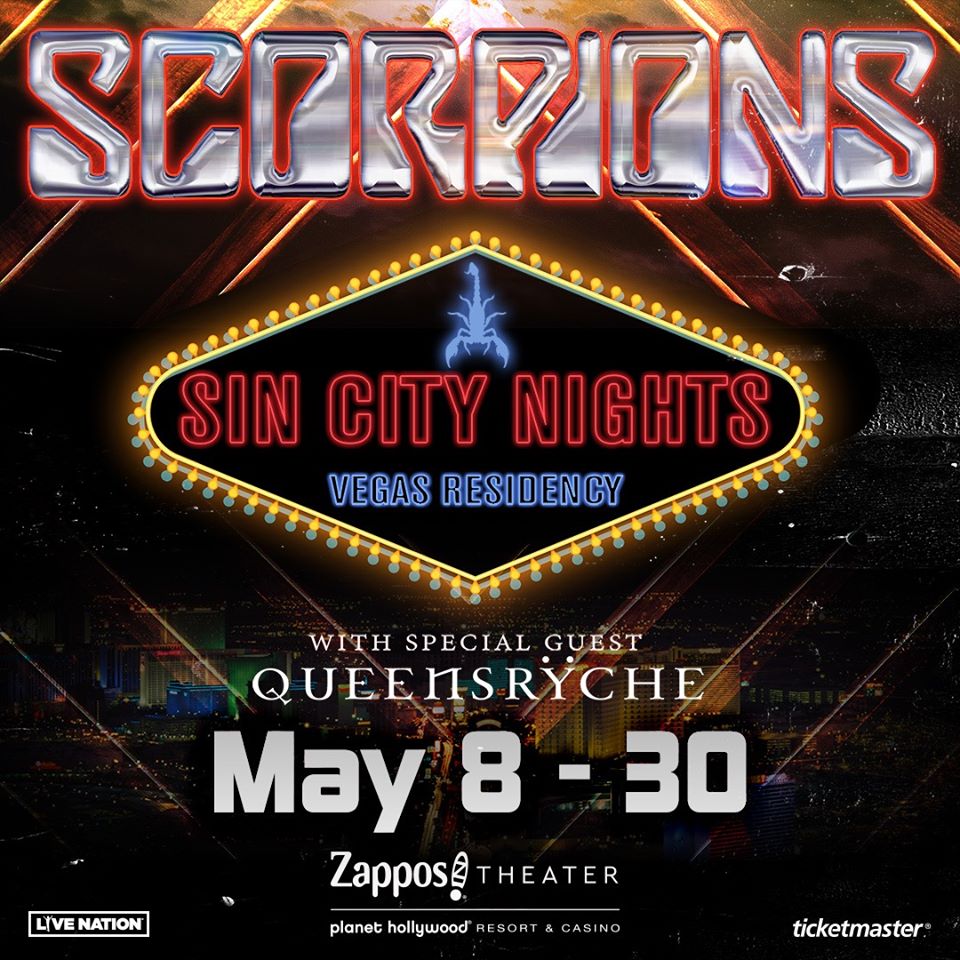 With over 110 million records sold around the world, SCORPIONS will play fan favorites from their incredible catalog, including “Wind Of Change”, “Still Loving You”, “Rock You Like A Hurricane”, “Send Me An Angel” and many more.

Founded in Hannover, West Germany in 1965, SCORPIONS were part of the first wave of metal in the 1970′s with their debut album, “Lonesome Crow”, released in 1972. The band rose to arena status with seminal releases “Lovedrive”, “Virgin Killer” and “Animal Magnetism”. In the ’80s, SCORPIONS amassed a string of Billboard chart toppers from “Love at First Sting” and “Blackout”, including multiple Top 10 singles “Rock You like a Hurricane” and “No One like You”, as well a string of successful singles such as “Send Me An Angel”, “Still Loving You” and “Wind of Change”.

The band was also ranked No. 46 on VH1‘s “Greatest Artists of Hard Rock” and their hit “Rock You like a Hurricane” also landed as No. 18 on VH1‘s list of the “100 Greatest Hard Rock Songs.” Celebrated across the globe, the iconic rock act has sold more than 100 million albums worldwide and has received multiple honors including World Music Award winners, a postage stamp in Brazil, a Star on Hollywood RockWalk, and Echo honors. Most recently, they were honored with the Lower Saxon State Award.