Veteran American thrash metallers SACRED REICH are currently in the studio recording their highly anticipated new studio album — the band’s first in 23 years — titled “Awakening”. Due this summer, the disc is being produced by Arthur Rizk, who has previously worked with CAVALERA CONSPIRACY, POWER TRIP and CODE ORANGE, among others. “Awakening”will mark SACRED REICH‘s first release since the return of drummer Dave McClain.

Comments bassist/vocalist Phil Rind: “Recording is in full swing with producer Arthur Rizk at The Platinum Underground in Arizona. We are so excited to be back in the studio after 23 years. Dave is currently killing it on the drums. Sounds sick! Our new record, ‘Awakening’, is due this summer. Stay tuned! Tour dates across the planet coming your way!”

SACRED REICH has just announced tour dates across Europe and the U.S. The “Awakening” European tour will cover all of Europe and begins in November 2019. Additionally, SACRED REICH has announced a string of dates in North America alongside IRON REAGAN, LEEWAY and ENFORCED for May and European visits for festivals in July and August. 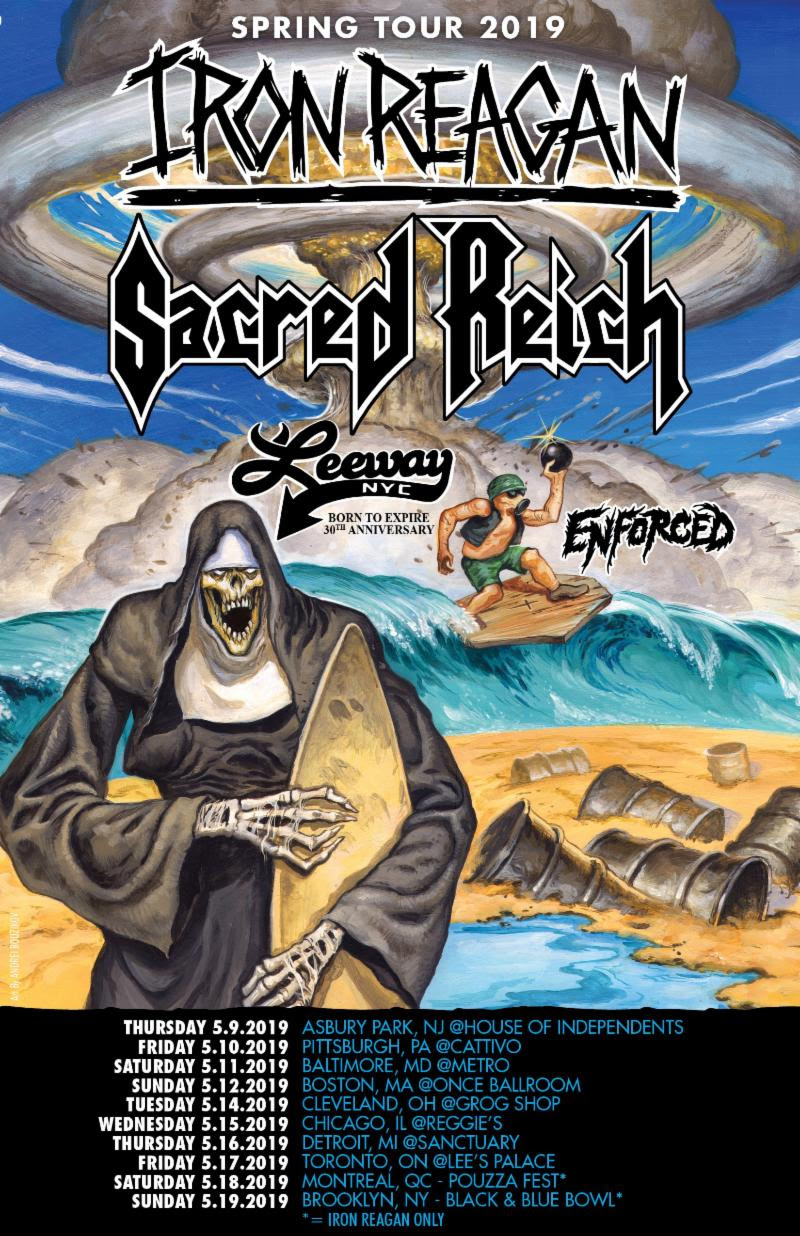 With IRON REAGAN, LEEWAY and ENFORCED:

McClain was a member of SACRED REICH from 1991 to 1995. He played on the “A Question”EP (1991) and the “Independent” (1993) and “Heal” (1996) albums before leaving to join MACHINE HEAD. SACRED REICH bassist/vocalist Phil Rind recently said that Dave‘s return to the band was “the best-case scenario that we could have hoped for. Dave is the best!” he added. “A great drummer and a great person and we are beyond excited to welcome him back to the band.”

Dave added: “I’m so excited about rejoining my brothers in SACRED REICH. To have the opportunity to make and play music with one of my favorite metal bands was always something I hoped could happen. I can’t wait for everyone to hear the new album that we’re recording and to come see us out on the road in 2019-2020.”

Formed in 1986, SACRED REICH is part of the second wave of thrash, along with TESTAMENT, DEATH ANGEL, DESTRUCTION and DARK ANGEL. Over the years, SACRED REICH has produced a catalog of politically charged aggressive songs that have stood the test of time. SACRED REICH‘s last studio album, “Heal”, came out in 1996. The band broke up in 2000 and remained inactive until 2006 when they received offers to play European festivals.

Since coming out of retirement more than a decade ago, SACRED REICH has almost exclusively played the European festival circuit every summer. But that changed in 2017 as SACRED REICH celebrated the 30th anniversary of its classic album “Ignorance”. To commemorate this milestone, the band brought its “30 Years Of Ignorance” tour around the world.