Eagle Rock Entertainment will release the first in-depth film biography of iconic musician Ronnie Wood, “Somebody Up There Likes Me”. An official selection at both the Tribeca Film Festival 2020 and the BFI London Film Festival 2019, the film — by acclaimed director Mike Figgis — will be available in North America as a virtual cinema release starting September 18 at www.ronniewoodmovie.com, running through October. This will be followed by a DVD, Blu-ray and deluxe hardback book release on October 9.

Those who purchase a ticket ($11) will also be treated to a question-and-answer session with Wood and Figgis.

As an artist, musician, producer and author, Wood has made countless contributions to the cultural zeitgeist. Yet, there is so much more to know about the man himself. This intimate portrait traces the many lives and careers of one of the most important guitarists in music, capturing what it means to be a rock ‘n’ roll icon.

“Somebody Up There Likes Me” traces Wood‘s 50-year musical history, from THE BIRDS, THE JEFF BECK GROUP, THE FACES (with Rod Stewart), and THE NEW BARBARIANS, to becoming a permanent member of THE ROLLING STONES. Additionally, Figgis captures Wood‘s charismatic warmth, energy and honesty as he speaks openly about his battles with drink and drugs. The film takes its title from a conversation with Wood about surviving his chronic smoking habit: “When they operated on my cancer, they took away my emphysema. They said my lungs were as if I’d never smoked. I thought: ‘How’s that for a ‘Get Out Of Jail Free’ card?’ Somebody up there likes me, and somebody down here likes me too.”

The documentary features brand new interviews with Wood‘s ROLLING STONES band-mates Mick Jagger, Keith Richards and Charlie Watts, as well as his FACES bandmate Rod Stewart. Other interviewees include Wood‘s wife Sally Wood, singer Imelda May and artist Damien Hirst, alongside both present-day performances and archive footage from Wood‘s stellar multi-band career. These interviews and performance segments blend with footage of Wood playing guitar and harmonica (a reminder of his talents as a versatile instrumentalist), as well as quiet, personal moments while he paints in his studio. It climaxes with Wood giving a beautiful, intimate performance of “Breathe On Me” from his 1975 solo album “New Look”.

“Somebody Up There Likes Me” is a fresh look at Ronnie Wood — a rewarding and compelling insight into one of music’s most likable, successful and complex key players.

Ronnie describes the film as summing up “the essence of survival” in a life he continues to live to the fullest, without regrets. “I wouldn’t change anything except I’d do it with my eyes open a bit more,” he says/ “I was in the hands of destiny all my life…and being in the right place at the right time.” 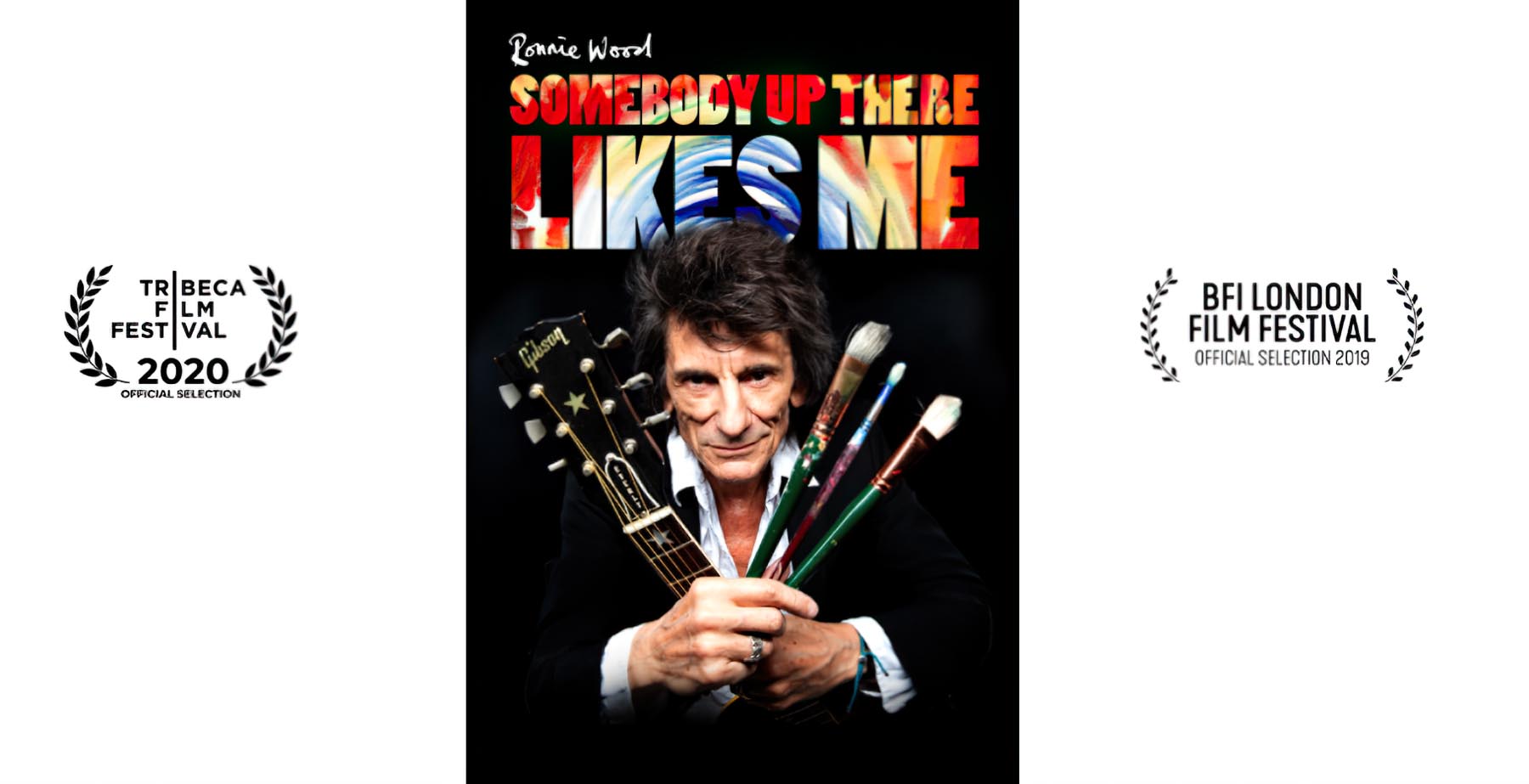