Zeitgeist Media (i.e. filmmakers Adele Schmidt and Jose Zegarra Holder) is the producer of the renowned “Romantic Warriors – A Progressive Music Saga” documentary series about the different progressive movements that emerged in the late 60s and 70s. They are currently in the final stages of completing their fourth film, “Romantic Warriors IV – Krautrock (Part 1)”, and for that they have recently launched a new Indiegogo campaign to bring the film to the finish line. The documentary official trailer can be watched below.

The new feature length documentary (the fourth in the Romantic Warriors series), this time about 70s German Experimental/Progressive Rock genre (i.e. Krautrock). The filmakers have been filming concerts, and interviewing musicians during the last two years. So far they’ve interviewed over 20 legends from bands such as Amon Duul II, Neu!, Guru Guru, Kraftwerk, Cluster, CAN, Agitation Free, Ashra Tempel, Embryo, Tangerine Dream, Faust, and many others, all of them considered canonic bands of this genre in our film. They expect to finish the Part 1 of the movie in January 2019.

As some of you know, Krautrock is a hydra-headed beast and, at its best, it consists of some of the most synapse-exciting sounds ever laid down. Although the film features merely a tiny fraction of the music that emerged from Germany during Krautrock’s Golden Age (1968-1974), the included bands have become crucial components of the Progressive/Electronic/Experimental canon and have influenced enough bands to fill several years of festival lineups.

In order to organize the large amount of material that was filmed over the past three years, Adele and Jose have divided Romantic Warriors IV into two films, Part 1 and Part 2. The first one (to be released in early 2019) focuses mainly on the bands in the Cologne, Düsseldorf region (and one band from Hamburg), and the second part (to be released in late 2019) will be focusing mostly on the bands of the Berlin and Munich scenes. Both documentaries are feature lengths stand alone films. Through interviews with “Krautrock” musicians, clips of live performances, photographs, and current/archival footage, the films will bring you onto a journey of remarkable times of musical innovation that has shaped the decades after. 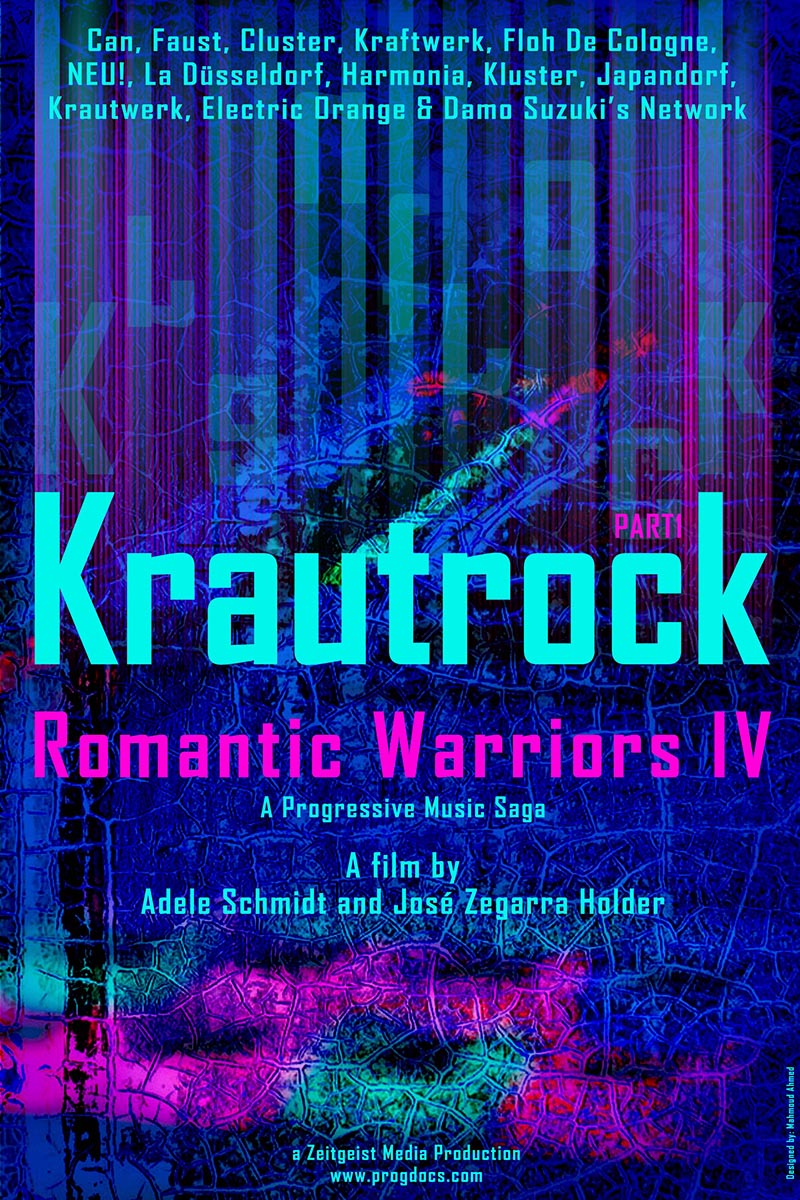 The Zeitgeist Media have released three films in the series: Romantic Warriors I (2010), Romantic Warriors II – About Rock in Opposition (2012), and Romantic Warriors III – Canterbury Tales (2015). These films have been screened and watched by thousands of progressive music fans around the world, contributing to the recent rise of interest in progressive music in this decade. They have been working tirelessly on this new film for more than three years. 100% of movie has been shot and the rough cut is close to completion. They have created this film alone, with no support from grants, sponsors, funders, or financial backers, putting in countless hours researching, investigating, planning, filming, and editing to get to where they are, and spending a large amount of our their own money to produce it.

Now they are appealing to music fans, to cover the post-production cost, in other words, all of the image and sound editing, and to allow them to give the film in the best conditions possible for video (and possibly, cinema) without any distribution restraint. If you want to contribute to their efforts, you can do so at this location. To know more about their previous movies you can visit their website.