Get ready for round three, with the most ultimate line-up set to ignite South Florida this fall for the third annual Rockfest 80’s festival event. The epic two-day event is coming to Miramar Amphitheater, Saturday November 10th & Sunday November 11th, 2018 – Doors open noon to 10:30pm each day. Tickets are on-sale at this location.

Miramar Amphitheater (Home to Rockfest 80’s) located in Miramar, FL. is the center piece of the Miramar Regional Park. The completion of the Miramar Amphitheater came in spring of 2017 with a July 4th grand opening. This state of the art Amphitheater is the only Amphitheater in South Florida with a canopy covering its 3,000 luxury seats, flanked by a general admission lawn that holds an additional 2,000 people. Being one of Broward County’s premier parks and extremely popular serving Miramar, Pembroke Pines, Hollywood and both Ft Lauderdale and Miami. Along with a spectacular water park, the park has two soccer fields, a baseball field, basketball courts, BBQ areas and many party pavilions. 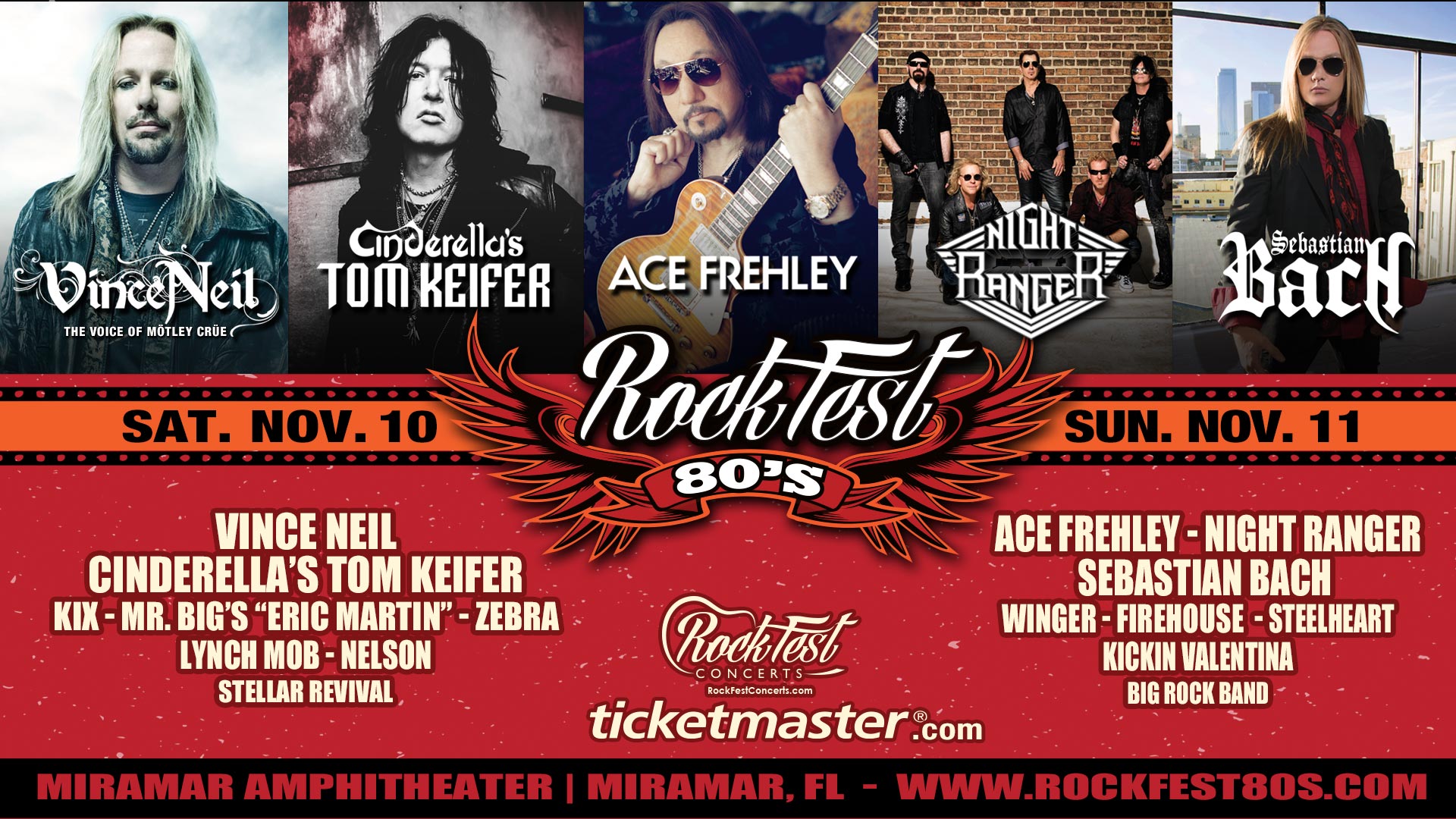 About each band announced so far:

Vince Neil – Hailing from one of the best-selling rock bands of all time “Motley Crue” and selling more than 100 million records, producing major hits like “Live Wire”, “Looks that Kill”, “Shout at the Devil”, “Too Young to Fall in Love”, “Home Sweet Home”, “Smokin in the Boys Room” “Wild Side”, “Your All I Need”, “Girls, Girls, Girls”, “Kickstart My Heart”, “Without You” and “Dr. Feelgood” to name a dozen. Vince Neil following Motley Crue’s final tour in 2017, has embarked on his extremely successful solo career and continues to sell out to his worldwide and very loyal fan base.

Ace Frehley – Former lead guitarist and co-founding member of the rock band Kiss. Frehley embarked on a solo career with his first solo record selling platinum. It is also the highest selling of the four Kiss member solo albums (0ver 1,000,000 records sold). Guitar World magazine ranked him as the 14th Greatest Metal Guitarist of All Time.

Cinderella’s Tom Keifer – Tom Keifer founder and lead singer of Cinderella was first discovered by Gene Simmons and then introduced to Mercury Records by Jon Bon Jovi for their initial record deal. Following three amazing albums and spawning over half a dozen hit singles, “Nobody’s Fool”, “Shake Me”, “Somebody Save Me”, “Gypsy Road”, “Don’t Know What you Got” and “Shelter Me”. Cinderella’s fourth record (released by Sony Records) did not fair well. In 2013 Tom Keifer released his first solo record and began his solo career of recording and touring worldwide to present day.

Sebastian Bach – Sebastian Bach has sold more than 20 million records both as the lead singer of Skid Row and as a solo artist. He is particularly known for the hit singles “I Remember You,” “Youth Gone Wild,” and “18 & Life,” and the albums Skid Row and Slave To The Grind, which became the first ever hard rock album to debut at No. 1 on the Billboard Top 200. Bach, who continues to tour worldwide and has released his autobiography titled “18 And Life on Skid Row”, stirring up the 80’s era of Rock & Roll in true Sebastian Bach fashion. Bach also expanded his star power, gracing the Broadway stage with starring roles in “Jekyll & Hyde,” “Jesus Christ Superstar” and “The Rocky Horror Show.”

Night Ranger – An American band that stormed the 1980’s music scene with their first five albums selling more than ten million records worldwide. The band has sold over 17 million records to date and released one of the most recognized songs of the 1980’s “Sister Christian”. The last five years, Night Ranger has emerged themselves back into the touring world and delivering sold out performances Nationwide.

Winger – Formed in New York, this American Band ruled the MTV generation and delivered extremely popular videos, multi-platinum records, smash hits and an incredible live show. Stepping into the 1990’s, the band was nominated for best new heavy metal band. Both, the band Winger and lead singer Kip Winger (Solo) continue to tour the world. Winger still banging out their hits to their extremely loyal fan base as well as a very cool acoustic Solo show from Kip Winger.

KIX – The band gained great success in the 1980’s with the release of Midnite Dynamite and Blow My Fuse. Band members have continued to record and tour, playing the successful festival market, including Rocklahoma festival and are a consistent presence at the annual M3 Rock Festival in the band’s home state of Maryland.

Mr Big’s Eric Martin – This powerhouse vocalist started his career opening for the 1980’s elite Billy Squire, Hall & Oats, Rick Springfield, Molly Hatchet the Marshal Tucker Band and Foreigner to name a few….. Fronting the Super Group Mr Big, he rose to stardom and produced hit after it with his pure rock vocals and monster musicians. Today performing with both Mr Big and joining Trixter when he performs solo, Eric Martin stays busy touring the world.

Firehouse – Capitalizing on the 80’s music scene, the band reached stardom in early 1990 with their signature power ballads. The band success followed through the early 1990’s, winning the American Music Awards for Best New Hard Rock/Heavy Metal Band of 1991, Metal Edge Magazine’s Best New Band of 1991, Young Guitar Magazine’s Best Newcomer of 1991, and Music Life Magazine’s reader’s pop poll Best Newcomer of the Year 1992. The band’s first album sold over two million copies in the United States, and was certified double platinum by the RIAA. The band delivered multiple hit singles “Love of a Lifetime”, “Don’t Treat Me Bad”, “All She Wrote”, “When I Look Into Your Eyes”, and “I Live My Life For You”.

Steelheart – Originally known as Red Alert, Steelheart has been revving up audiences since 1990. Hits such as “I’ll Never Let You Go (Angel Eyes)” and “She’s Gone” solidified Steelheart’s place in rock history. Lead vocalist Miljenko Matijevic, lead guitarist Uros Raskovski, Rev Jones on bass and Mike Humbert on percussion currently make up the band. Steelhart is releasing a new album this summer set to include a few surprise guest appearances on the recording. It will be the band’s first new album since 2008.

Trixter – In September 1989 the band went to Hollywood to record their debut album with producer Bill Wray. Songs from the 1988 recording session including “Ride the Whip” and “Only Young Once” made it to the new album. Trixter was released in May 1990 with the song “Line of Fire” as the single for rock radio. By July 1990 the song reached No. 1 on Z-Rocks Top 100. Along with the release of the album, Trixter also filmed their first video for the song “Give It to Me Good”. In mid-October Trixter joined Dokken on tour around the USA. It was on this tour that MTV added the video for “Give It to Me Good”. Within one week the video was No. 1 on the Dial MTV top ten video countdown. The video stayed No. 1 for five weeks straight. In December 1990 Trixter filmed the video for the second single, “One in a Million”, at a sold-out show in Rockland County, New York. The band also recorded a song, “One Mo Time”, for the film “If Looks Could Kill”. By January 1991 the record was selling 20,000 units per week. The video for “One in a Million” went No. 1 on MTV for three weeks. Trixter did their first-ever arena shows opening for Poison and then headed out on a five-month North American tour with the German rockers Scorpions.

Nelson – American rock band founded by singer/songwriter Mathew and Gunner Nelson (twin sons of Ricky and Kristin Nelson). With over two million records sold, the band continues to produce and release albums independently under their own label, Stone Canyon Records. Both Mathew and Gunner tour as Nelson (The Band) as well as performing their Acoustic show.

Zebra – Zebra’s mainstream debut on Atlantic Records was in 1983 with their eponymous album, produced by Jack Douglas and featuring the singles “Tell Me What You Want” and “Who’s Behind The Door?” The original line up still touring the US and a new album in in the works.

Kickin Valentina – Mix a little bit of sleaze, a little bit of blues, and a whole lot of rock’n’roll attitude, and you have KICKIN VALENTINA – a band that is quickly gaining attention while growing a solid fan base across the US and abroad. KICKIN VALENTINA has been busy touring America and opening for artists as diverse as Buckcherry, Queensryche, Pop Evil, Fozzy, Skid Row, Red Dragon Cartel, Sebastian Bach, Doro, Eve to Adam, Faster Pussycat, Nonpoint, Kix, LA Guns, and Cilver to name a few.

Influenced by Incubus and with individual members aspiring to the sounds of everything from blues and country to ’90s grunge, Stellar Revival quickly found success. They signed with Capitol Records and played massive music festivals around Europe. Starting 2017 with a bang ….  Stellar Revival was invited to open for Bon Jovi in Los Angeles at the premier LA Arena “The Forum”. Finishing their new record in fall and closing this year strong, Stellar Revival joins the Super Star Line Up 2nd year in a row on Saturday, November 10th @ Rockfest 80’s.

Big Rock Band – One of South Florida’s most successful local rock bands fronted by Alex Lencina. This seven piece rock powerhouse accompanied by audio God Bob Bludau continue to expand their fan base and create a “must see this band” attitude. 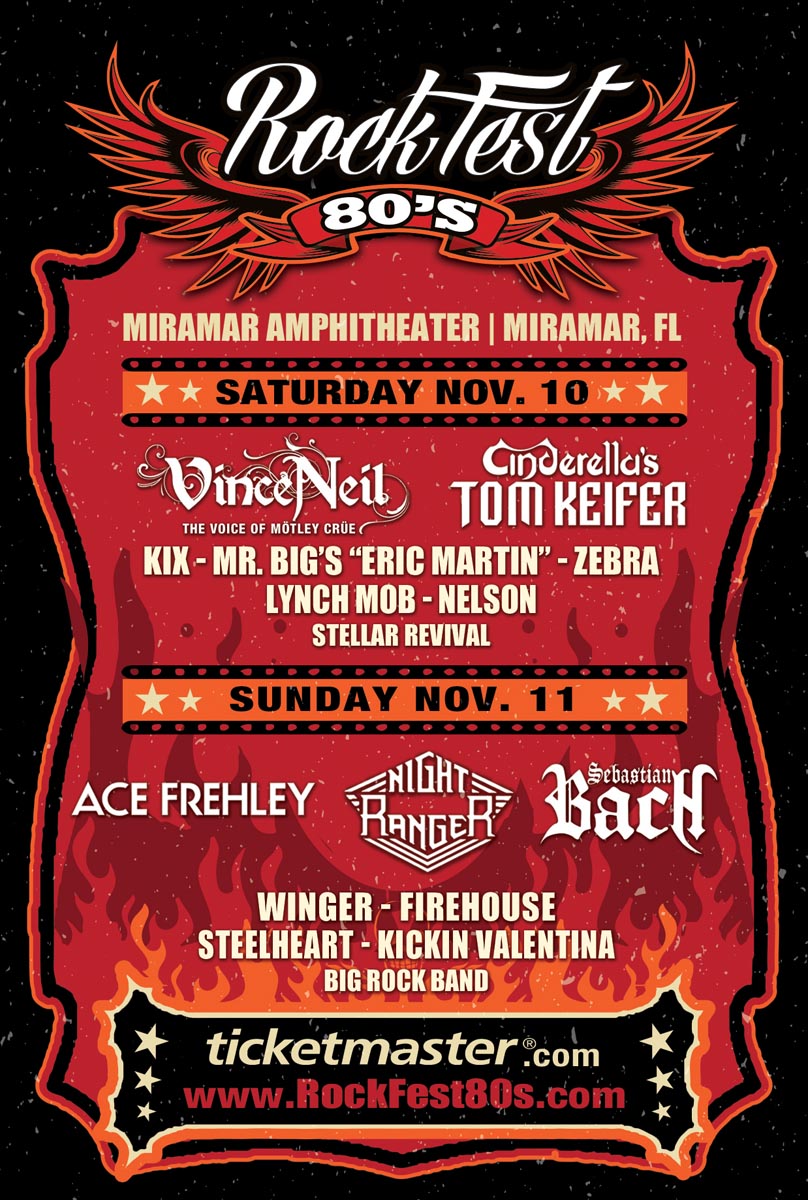 In addition to the music, there will be plenty of pop culture for rock fans to experience including:

Each price level is available in limited quantities and while supplies last. All tickets will be available on a first come, first serve basis. As each level of ticketing sells out, Rockfest will move to the next tier of ticket pricing.