U.K. Grindcore pioneers, Napalm Death have announced their Spring North American headline tour. The band will be joined by death metal band and labelmates Aborted (April 17-May 16), The Locust (April 9-April 15), Nastie Band (April 9-April 15), Tombs (April 24-May 16), and Wvrm (April 17-May 16) for select dates. The tour starts on April 3rd in Philadelphia and wraps on May 16th, making stops in major markets such as Brooklyn, Los Angeles, Chicago, Atlanta, and more. For more details and to purchase tickets, visit Napalm Death‘s website, at this location

Napalm Death recently announced the release of a new 7″ digital EP, “Logic Ravaged By Brute Force”, which is set for release on February 7th. The double-a-side EP includes the new title track and a cover of Sonic Youth’s “White Kross”. The release also acts as a teaser for the band’s forthcoming studio album, expected for release late 2020. Pre-order the EP digitally here

Aborted will be touring in support of their 2018 release, “TerrorVision”, which features some of the sickest riffs and most insane blasts in Aborted‘s history. Get “TerrorVision“, produced by Kristian ‘Khole’ Kohlmannslehner, here. Stay tuned for more details about new music.

Tombs mastermind Mike Hill comments on the forthcoming run: “Napalm Death are legends and it’s an honor to hit the road with them as well. The whole tour package is going to melt faces. We’ll be bring our A game to this one.”

Tombs will be supporting their upcoming EP, “Monarchy of Shadows,” which is due on February 28 via Season of Mist. This will be the band’s debut to the label. Listen to the previously released title track at this location. 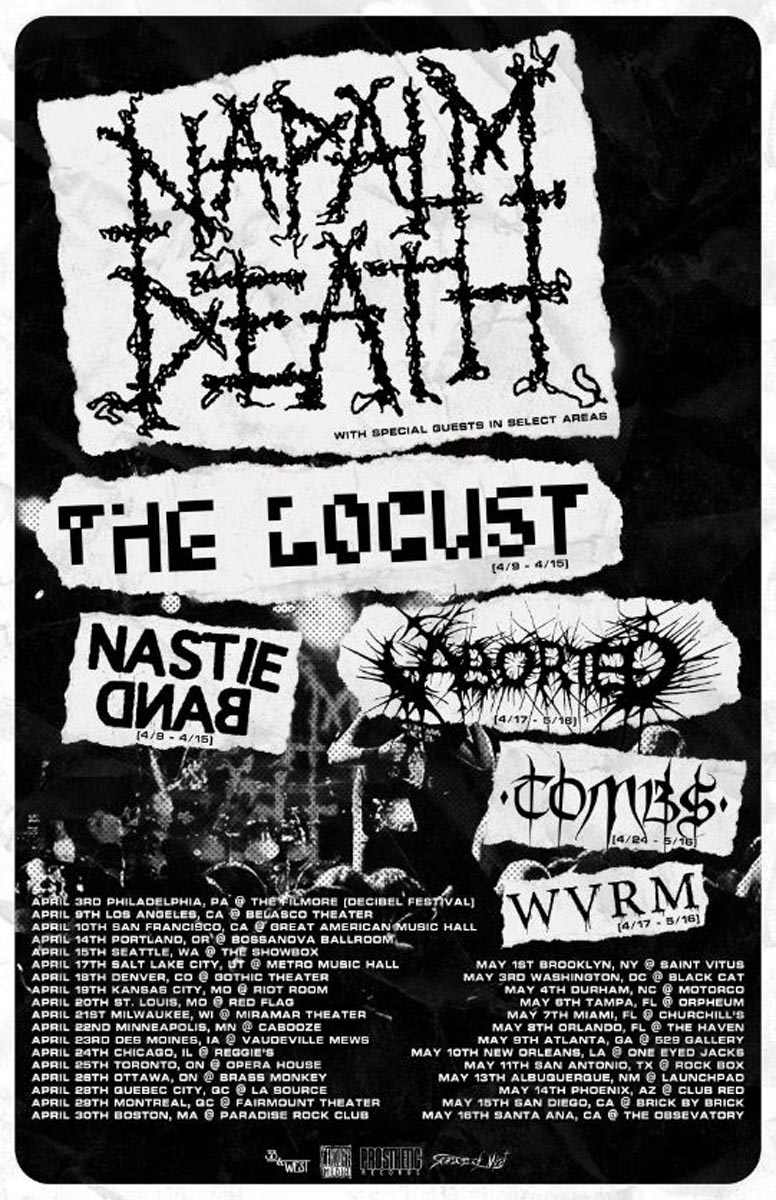 Napalm Death‘s enduring impact on the world of sonic savagery began in earnest in the late 80s, when the band’s first two albums – 1987’s “Scum” and its 1988 follow-up “From Enslavement To Obliteration” – refined and redefined the notion of brutality and velocity in the worlds of punk, hardcore and metal. Endorsed by legendary and much-missed DJ John Peel, the Brummie grindcore pioneers were such an exhilarating and yet alien dose of jolting adrenaline that even the mainstream media were forced to prick up their ears and take note. Throw in the fact that Napalm Death were – and still are – driven by a ferocious intelligence and a genuine desire to make the world a better place through the promotion of rational thought and respect for all fellow humans, they stood apart from the often nihilistic and intellectually bankrupt underground metal scene and have remained unique and unerring ever since. While grind purists may point to those earliest records as evidence of the band’s significance, it is the tireless and terrorizing exploits of the now classic line-up of vocalist Mark ‘Barney’ Greenway, bassist Shane Embury, guitarist Mitch Harris and drummer Danny Herrera that have cemented Napalm Death‘s status as extreme music legends. Over the last 20 years, the band have released a relentless slew of groundbreaking and fearless albums and other releases that have consistently punched holes in the heavy music world’s perimeter fence, espousing an indestructible credo of creativity and lyrical fire along the way.

Over the course of the group’s 20-plus career, Aborted have transformed-via tongue-through-cheek and gross-out histrionics- from minor curio to the Powerhouse from Flanders. The ascent through death metal’s maggot-infested, disease-ridden ranks didn’t come easy, however. Starting with 2003’s stab-to-the-face “Goremageddon: The Saw and the Carnage Done”, Aborted crawled through some of the most disgusting sewers, serviced some of the wickedest human waste plants, and cleaned up Europe’s most brutal crime scenes. From there, it’s been nothing but true reverence (by fan and peer alike) across six agonizingly good full-lengths. Aborted are, however, sickly serious and positively savage about their craft. Aborted is Sven De Caluwe (vocals), Harrison Patuto (guitar), Ian Jekelis (guitar), Ken Bedene (drums), and Stefano Franceschini (bass).

There’s a line from Mike Hill’s audiobook/tour diary of Anodyne’s 2004 European tour in which the gravel-throated front-man affirms, “I will always outwork you.” In that case, Hill was referring to an incident in Germany early on during a six-week long overseas jaunt with his previous band. In actuality, however, he could have been talking about any instance between when he first picked up a guitar as a teen and the present. Whether it’s his history dating back to previous bands Otis, Anodyne, King Generator or Versoma, his ongoing solo work in Vasilek, the more recent Scorpion Throne project or his twelve year-long reign as the driving force and nerve center of post-black metal institution Tombs, hard work is second nature and nothing will keep the guitarist/vocalist from creative endeavor and expression.

Formed in the gritty corners of pre-gentrified Brooklyn, NY, Tombs’ early mandate was steeped in the harshness and atonality of black metal but dosed with trace amounts of the varied influences and inspirations ingrained in Hill’s musical muscle memory by previous bands.