The 11-song release features tracks written by the Eureka, California-born band for their 1986 cassette only demo as well as a re-imagined cover of the S.O.D. classic “Hypocrites / Habla Español O Muere” (a.k.a. “Speak English Or Die”) and CORROSION OF CONFORMITY‘s “Loss For Words”.

The album was produced by MR. BUNGLE, recorded by Husky Höskulds at Studio 606, and mixed by Jay Ruston. Rhea Perlman narrates “Anarchy Up Your Anus”.

“Recording this music with these guys was an enormous head-rush of virtuosity and surprises every day in the studio,” explains Patton. “Trey’s video game-esque solos, Scott‘s bionic right hand and cyborg-like precision, Dave‘s caveman-meets-Bobby Brady-like drum fills, Trevor‘s solid foundation and laser-focus to detail. There is nothing sweeter than getting your ass kicked by true comrades…where everyone has a singular drive and mission.”

Dunn adds: “Recording this record felt like we were finally utilizing our Ph.Ds in thrash metal. All we had to do was go back to our original professors for some additional guidance and talk them into joining us. Turns out we were A+ students. We even went for extra credit by revisiting some tunes that we’d given up on back in the day. It was less like a trip of nostalgia and more like the refining of an original, worthy document. We were haunted for 35 years by the fact that this music wasn’t given it’s due respect. Now we can die.” 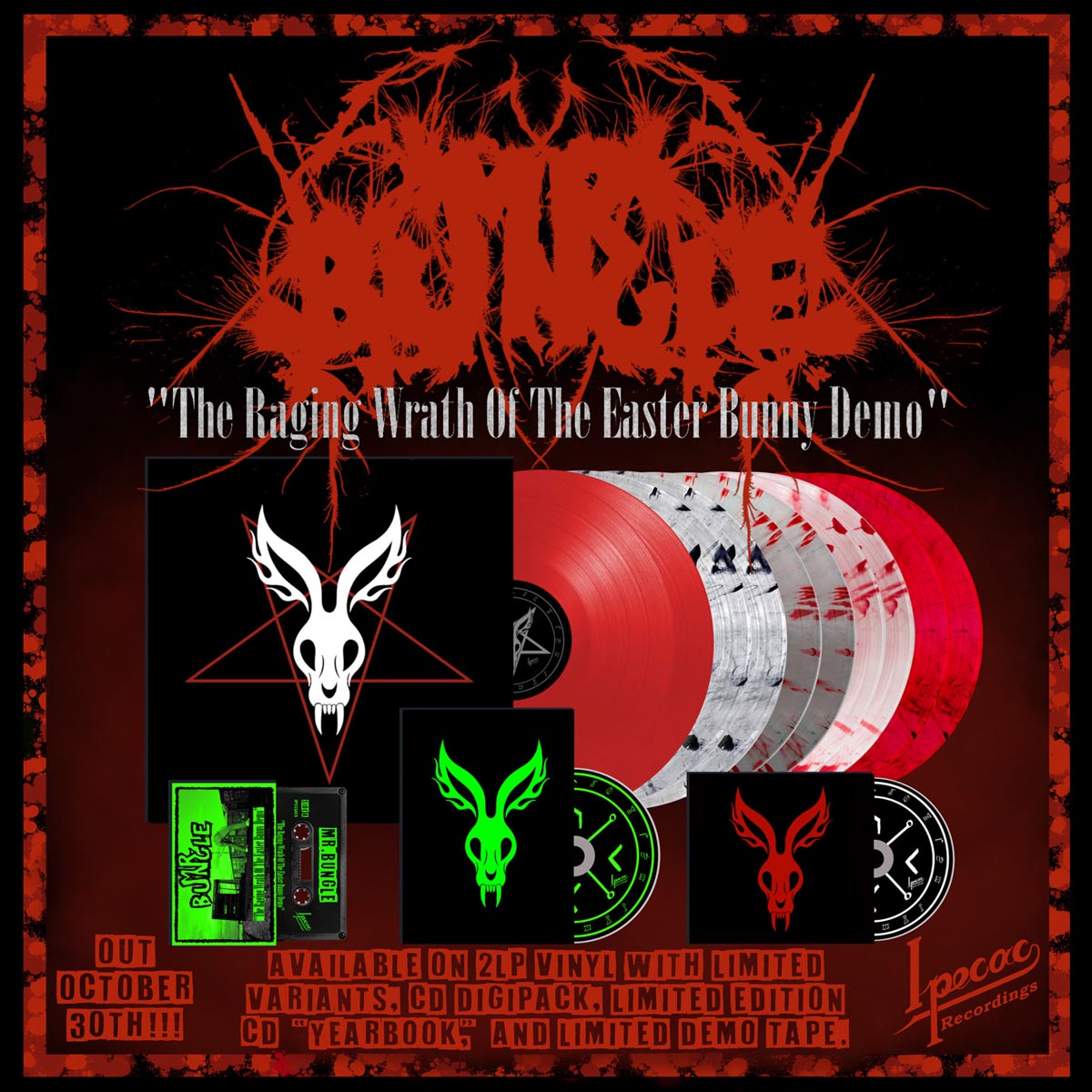 “The Raging Wrath Of The Easter Bunny Demo” track listing:

MR. BUNGLE has announced a Halloween special, “The Night They Came Home!”, a virtual live concert experience. Tickets are $15 and available now via www.mrbungle.live. The first screening airs at 12 noon Pacific/3 p.m. Eastern on October 31 with the on-demand program available for the following 72 hours. An array of exclusive, commemorative merchandise, including a limited (1000 copies) neon green vinyl variant, will be available to attendees.

MR. BUNGLE was formed in an impoverished lumber and fishing town by a trio of curious, volatile teenagers. Trey Spruance, Mike Patton and Trevor Dunn beget the amorphous “band” in 1985 up in Humboldt County, California, sifting through a variety of members until around 1989 when they settled on a lineup that managed to get signed to Warner Bros. Records. No one really knows how this happened and it remains a complete mystery that even the algorithms of the internet can’t decode. Up until 2000, they released three albums (“Mr. Bungle” in 1991, “Disco Volante” in 1995 and “California” in 1999), toured a good portion of the Western hemisphere and avoided any sort of critical acclaim. Some argue that the band subsequently broke up but there is also no proof of this. What is true is that they took 20 years off from performing under said moniker while they pursued various other musics that, in contrast, paid the rent.