Portnoy explains: “MIKE PORTNOY’S PERCUSSIVE NATION 2019 will be the first music camp I’m heading on my own. The educational aspect has been a big part of my development as a drummer. I’ve done hundreds of clinics, pretty much on every continent. I’ve also done three instructional videos. But around 15 years ago, I stopped doing formal clinics. I’ve been more inspired over these years to do things with other musicians as opposed to doing them by myself, like the Dog Camps I’ve done with my band, The Winery Dogs.”

“I named the camp PERCUSSIVE NATION in the tradition of my PROGRESSIVE NATION events and while it’s a drum camp at its core, it’s very definitely not just a drum camp. Other instruments will be equally as involved to showcase different techniques and different styles. We’ve got guitarists, drummers, and bass players, all from different universes – metal, fusion, rock. I’d encourage all the different kinds of musicians attending to go to every class; the drummers should check out the guitar and bass workshops and so forth, it’s so important.” 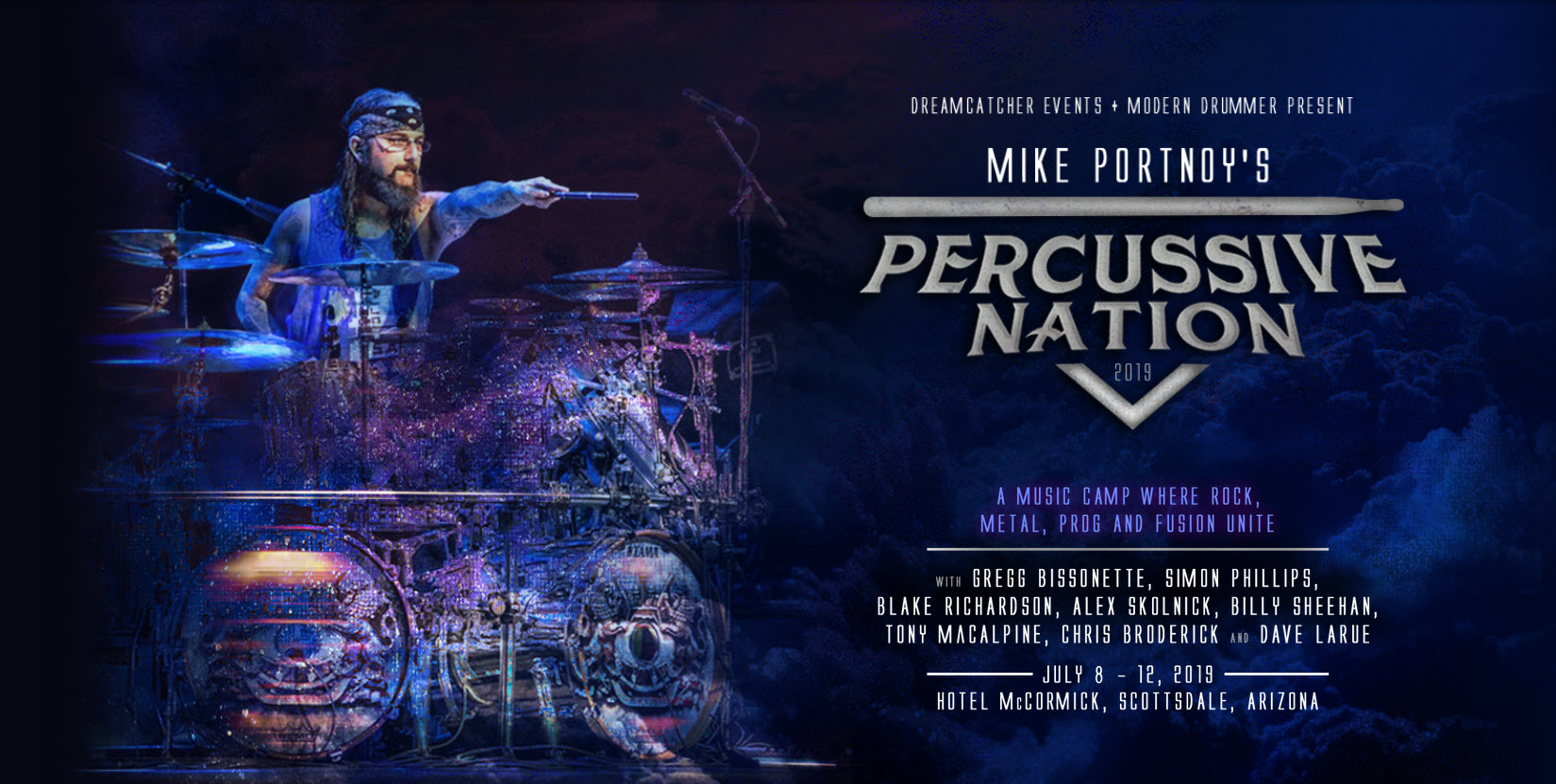 “My focus is on the musical aspects of what we do, how we interact with other musicians. I think that’s so much more important than playing a drum solo by yourself for twenty minutes. That doesn’t interest me – what I’m concerned with is making music and interacting with other musicians. With that in mind, we have got quite the lineup of instructors and guest musicians, guys from all my different bands, representing all the different things I do. I’m a friend of all these guys, they’re all musicians that I both respect and admire. All of these guys are people I work with in various capacities – I play in six different bands at the moment – so the lineup really represents all the different aspects of what I do, from metal to prog to classic rock and pop. My career is all about exploring that range and diversity so I want the same thing to apply to this camp.”

“Another thing that will make PERCUSSIVE NATION special is that it will be completely interactive. Back when I was doing clinics and instructional videos, it was just me talking, me playing, me demonstrating. But at PERCUSSIVE NATION, all the campers will be playing as well; they’ll get up and jam with my fellow instructors and me. It’s not just one person teaching the room, everybody in that room will be part of the entire event. I love that interaction. I plan on playing with all the campers and all the guests. Nighttime will be the most fun – that’s when I’ll get together with the other guest instructors to jam and put on shows, the most intimate mini-concert you’ll ever be a part of. You’ll get to see us musicians in an environment that you’d never ever be able to capture at a formal concert. Even if you don’t play anything at all, you could still have an amazing time at PERCUSSIVE NATION, you can just watch and be entertained.”

“It’s very important to me that PERCUSSIVE NATION is open to musicians on every instrument and every level of playing, from eight year olds picking up the guitar for the first time to older folks who just play an instrument for the fun of it. My camp is not just about learning to play your instrument; it’s about learning to play with others. It’s about camaraderie. Music is not about playing by yourself, it’s about working with other people – writing with other people and listening to other people. All of my work as an educator has taught me so much. You’re forced to break it down, to really analyze what you’re doing, so you learn from it as well. Getting questions from the students forces you to look at yourself and what you’re doing – it’s educational for everybody, including myself.”