MACHINE HEAD has released the official music video for its acoustic version of the song “Circle The Drain”. You can now watch it below.

Commented MACHINE HEAD front-man Robb Flynn: “When the pandemic hit in March, and all MACHINE HEAD tours got canceled, I started doing free Acoustic Happy Hour shows on MACHINE HEAD‘s Facebook page to get out the pent-up energy, entertain some friends, have some laughs, and have a few drinks every Friday. As we had just released our new song ‘Circle The Drain’, fans started asking for me to play it, so I started messing around with it and came up with a re-imagined version of it. It got a phenomenal response… People genuinely loved it, and were continually asking me to release it, and so I recorded it a few weeks back in my home studio, and here it is.”

Originally released in February 2020 via Nuclear Blast, the anti-Valentine’s Day song has racked up millions of streams and cracked the Top 50 at radio. “Circle The Drain” was inspired by Flynn‘s friend who served in Afghanistan and returned home only to find his relationship with his partner falling to pieces. 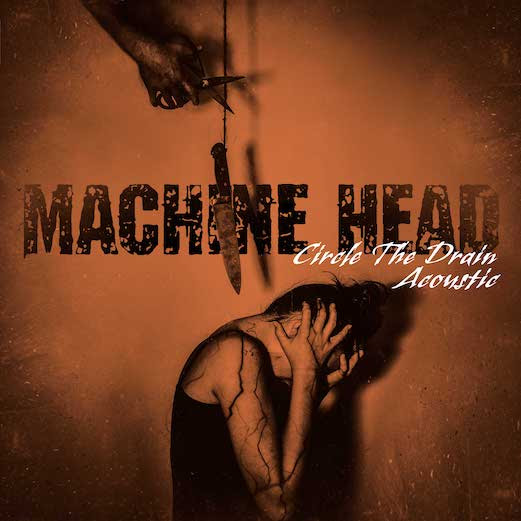 Flynn stated after the original was released: “She had messed around on him, then got paranoid about him messing around on her, and drove him crazy. We had a conversation on Valentine’s Day and he said to me, ‘They were just circling the drain.’ … The phrase struck me. A few days later I incorporated it into the song I’d been working on.

“It was a strange parallel with my life at the time, having recently had two band-members quit, and even more bizarrely, two long-time couple friends of my wife and I, also divorce. It was break-up season, and it played out with friends taking sides, people not being invited to certain events anymore, social and emotional pressure, and all the typical stuff that happens when a relationship goes bad.

“Watching this guy pull through it helped me pull through my own upheaval. The lyrics to ‘Circle The Drain’ came out of that frustrating time. It’s a sad song about relationships gone bad, but accepting that it’s over, and making yourself move on. It’s written in a more metaphorical tone, as I didn’t want it to be about my life, but to be about anybody’s life who may be going through a rough time. It may not be a song that connects with everyone, especially those in a solid relationship, but if the day ever comes when your life goes awry, this song will be a lifeline for you, something to help pull you up out of that dark place.”

This past June, MACHINE HEAD released “Civil Unrest”, a two-song digital single featuring A-side “Stop The Bleeding” and B-side “Bulletproof”. This pair of fierce protest anthems were both written days after the back-to-back murders of George Floyd and Ahmaud Arbery. “Stop The Bleeding” features a guest appearance from KILLSWITCH ENGAGE front-man Jesse Leach, with Flynn and Leach trading lyrical lines that spit anger and frustration at current events.