Cult New York heavy metal band and godfathers of power metal  RIOT V,  the band featuring members of legendary metal pioneers RIOT,  will release their 16th album entitled, Armor Of Light, on April 27th via Nuclear Blast. Today sees the release of the first single off the new album, entitled “Victory“, just in time for the launch of the album pre-order. The new songs promises to please fans of the Thundersteel-era of RIOT, as main song writer and long time Mark Reale music collaborator Don Van Stavern undertakes a lot of the writing as he did on Thundersteel, The Privilege Of Power and the latest offering Unleash The Fire. You can listen and watch the new track in the video below.

Mastermind Donnie van Stavern (bass) states: “‘Victory’ is the first song on the new album Armor of Light and the first song I wrote for it! I’m taking it back to my writing roots of Thundersteel/Privilege of Power style, a fast no holds barred face melting assault on your ears! Although it is about a victorious battle of Thunder Bay it also means a victory of sorts for us and the fans for keeping the torch burning! Rise up your voices strong and scream along cry out…Victory!”

Since their legendary debut album “Rock City” (1977), RIOT has released numerous heavy metal classics, including “Fire Down Under” (with classics like “Swords And Tequila“), their masterpiece “Thundersteel” (1988), and the unforgotten “The Privilege Of Power“(1990). After the death of Mark Reale and the departure of Tony Moore, Todd Michael Hall (from Michigan, USA), completed the line-up of the band, which in the meantime performed under the name of RIOT V under the auspices of the two long term members and main songwriters Donnie van Stavern (bass) and Mike Flyntz (guitar). With the critically acclaimed “Unleash The Fire” (2014), a pure power metal jewel once again underlined the musical importance and influence of the quintet.

Many artists name-check RIOT as an important influence of their musical career and have paid tribute to the power metal godfathers on multiple occasions. The list is long and includes several well-known acts such as HAMMERFALL (Flight Of The Warrior), Luca Trill’s RHAPSODY (Thundersteel), AXEL RUDI PELL (‘Warrior’) and newcomers such as NIGHT DEMON (Road Racin), ALPHA TIGER (Flight Of The Warrior), SAVAGE MASTER (Swords And Tequila) and STALLION (Rock City). 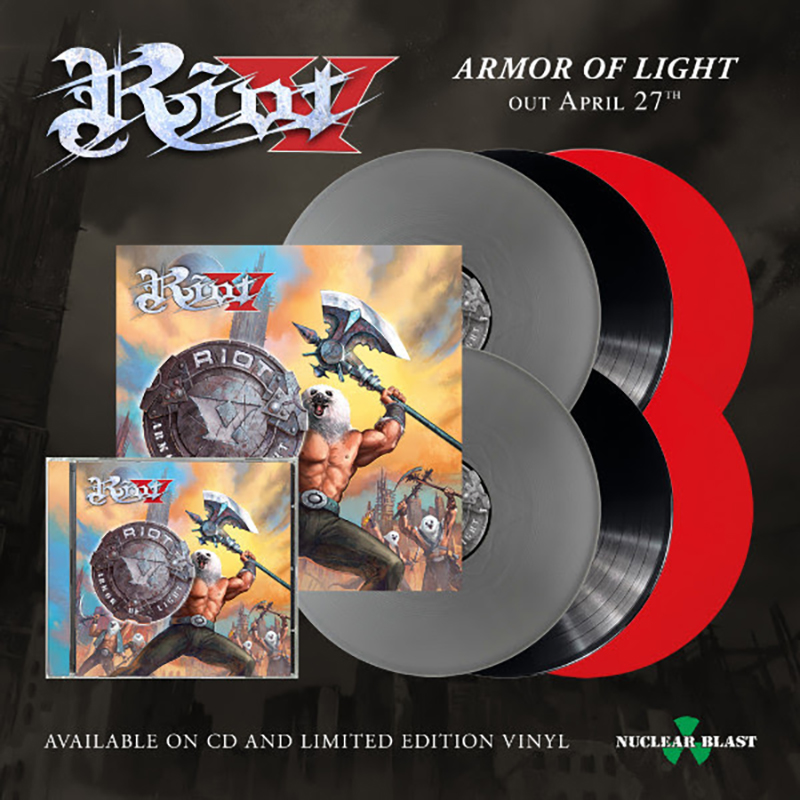 Pre-order Armor Of Light digitally at this location and receive “Victory” instantly or stream the song.