British heavy metal legends IRON MAIDEN have announced nearly three dozen shows for next spring and summer as part of their acclaimed “Legacy Of The Beast” tour.

MAIDEN front-man Bruce Dickinson commented: “We’re immensely proud of this show and we’ve had great reactions from the many fans who came to see us in Europe, North America, Mexico and South America. The production for Australia is exactly the same as the other shows on this tour so far and is based on our mobile game the ‘Legacy Of The Beast’, which basically takes various incarnations of Eddie into many different MAIDEN worlds. This inspired us to put together a stage show to take our fans through different worlds and experiences set to appropriate songs.”

“It is not that easy designing different worlds on stage and we put a huge amount of work into this to make it work, and the end result we feel is our most spectacular and certainly the most complex show to date. We’ve got all kinds of crazy things going on, including a replica Spitfire plane dominating the stage during ‘Aces High’, tons of pyro, a giant Icarus, muskets, claymores and some truly marvels flame-throwers which I have a hell of a lot of fun with, as you will see! And of course, we have Eddie, as you’ve never seen him before, and absolutely loads of other surprises.

“I’ve had the time of my life playing with all these magnificent props on stage; it’s been fantastic. We can’t wait to bring this show to you!”

After a six-date run in Australia and New Zealand in May, they will play in Japan and the Philippines, before traveling to Dubai, United Arab Emirates and Tel Aviv, Israel. MAIDEN will then return to Europe for a number of festival appearances and headlining shows in Finland, Germany, United Kingdom, Belgium, Denmark, Norway, Sweden, Russia, Poland, Czech Republic, Holland, France, Austria, Italy, Portugal and Spain. 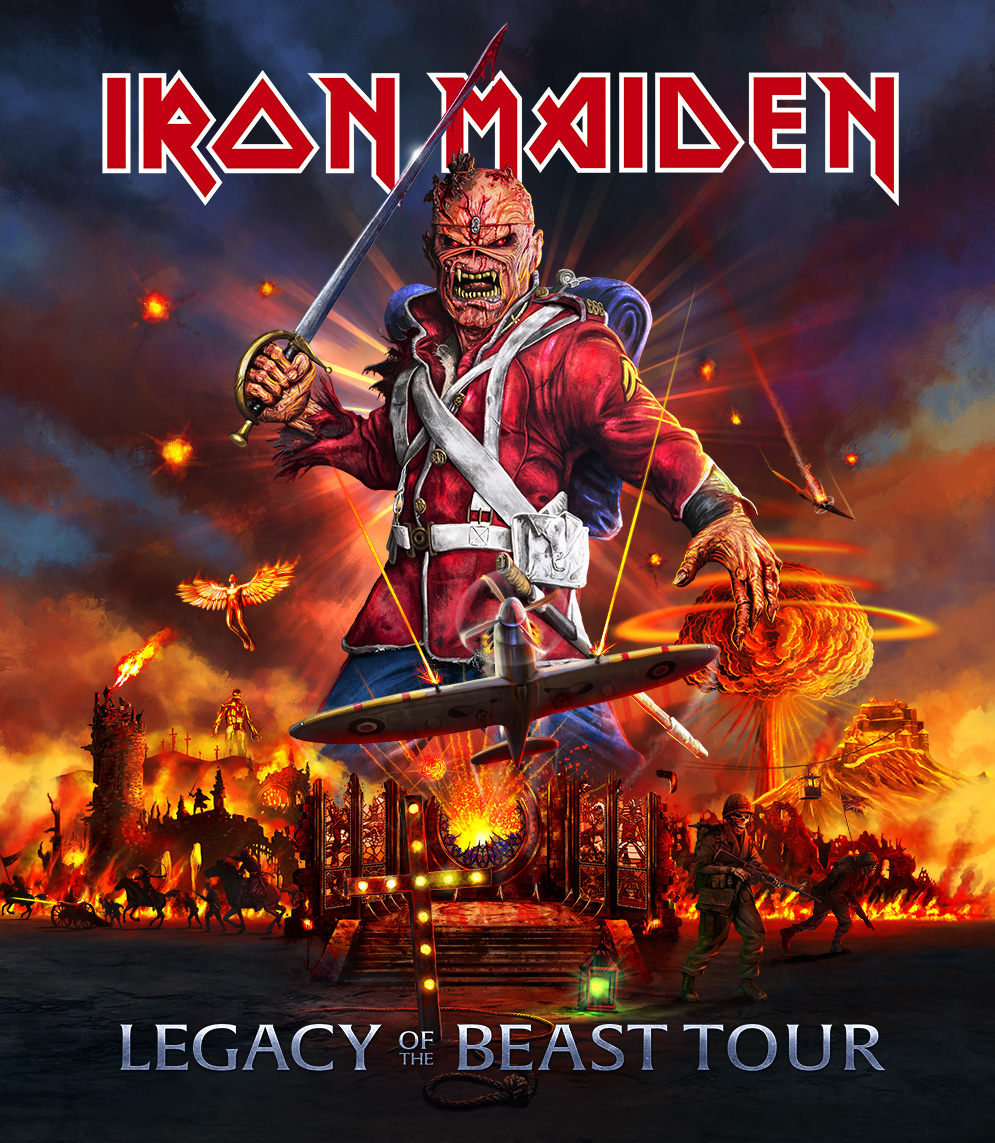 MAIDEN‘s 2019 North, South and Central America trek comprised 44 shows in six countries, which, combined with the band’s 2018 European dates, means that the group has taken the “Legacy Of The Beast” show to over one and three quarter of a million fans around the globe.

The concept for the “Legacy Of The Beast” tour was inspired by MAIDEN‘s mobile game and comic book of the same name. The stage set design features a number of different but interlocking “worlds” including a Spitfire buzzing the stage during the opening number, “Aces High”. The plane is a 90-percent-sized replica of an actual Supermarine Spitfire Mk Vb registration number AA 853 from 302 Squadron that saw active duty in 1941. The first leg of the “Legacy Of The Beast” tour opened in Europe last year to outstanding critical acclaim, not just by the 750,000-plus fans who came to see the show but right across national press and rock media.

We captured the initial show of the US run of this tour, enjoy some of the photos below!