IRON MAIDEN will play at the Morumbi Stadium, Sao Paulo on October 6th and will also be making a return visit to Porto Alegre, where they last played in 2008, to the Gremio Stadium on October 9th with the Legacy Of The Beast Tour.

These dates follow their headline show at Rock In Rio on October 4th when 90,000 tickets sold out in less than two hours. This marks the final tour announcement for Maiden concerts in 2019 with the 2019 Legacy Of The Beast Tour covering 44 shows in six countries across North, South and Central America. Maiden’s longstanding and mutually passionate relationship with their Brazilian fans goes back decades, from their now legendary first ever performance at Rock In Rio in 1985 to their first proper tour in 1992 with Fear Of The Dark that also marked their first stadium show in Sao Paulo. 2001’s Brave New World Show, again at Rock in Rio which marked the return of Bruce Dickinson & Adrian Smith to the band was recorded live and released as Rock In Rio the following year.

Lead singer Bruce Dickinson comments: “We are happy to return to Brazil and share the Legacy of the Beast Tour with all our friends! We are immensely proud of this show and we had great reactions from the many fans who came to see us in Europe last year. The production is based on our mobile game The Legacy of the Beast, which basically features several incarnations of Eddie on the different worlds of Maiden. This inspired us to put together a show to take our fans through these worlds and experiences defined by the songs. It’s not so easy to design different worlds on stage and we’ve had a hell of a lot of work to make it all work. The end result we feel is that this is our most spectacular and certainly the most complex show to date. We have all sorts of crazy things going on, including a Spitfire replica dominating the stage during Aces High, tons of fires, a giant Icarus, muskets, swords and some truly wonderful flamethrowers with which I have so much fun, you go to see! And of course we have Eddie, as you’ve never seen before, plus other big surprises. I’m living one of the best moments of life, playing with all these magnificent accessories on stage, it’s been fantastic, we can not wait to show this show to you! “

Steve Harris, bassist and founder of the band, adds: “We thought a lot about the song list for this tour as they needed to follow the narrative of the changing worlds of the show on stage. And we ended up with a very strong and balanced ensemble that mixing songs that we have not played for years, such as Flight Of Icarus, Sign Of The Cross and The Clansman, with songs we know fans want to hear like The Trooper, 2 Minutes To Midnight, The Number Of The Beast, Fear Of The Dark, Run To The Hills, Hallowed Be Thy Name and others, reflecting the journey through the different themes of the show. The whole band is really enjoying this tour a lot and we look forward to seeing everyone in Brazil again “

Tickets for the shows will be available to the general public from Wednesday May 29th from livepass.com.br. An exclusive presale for Iron Maiden Fan Club members will take place on Friday May 24th – details can be found here. 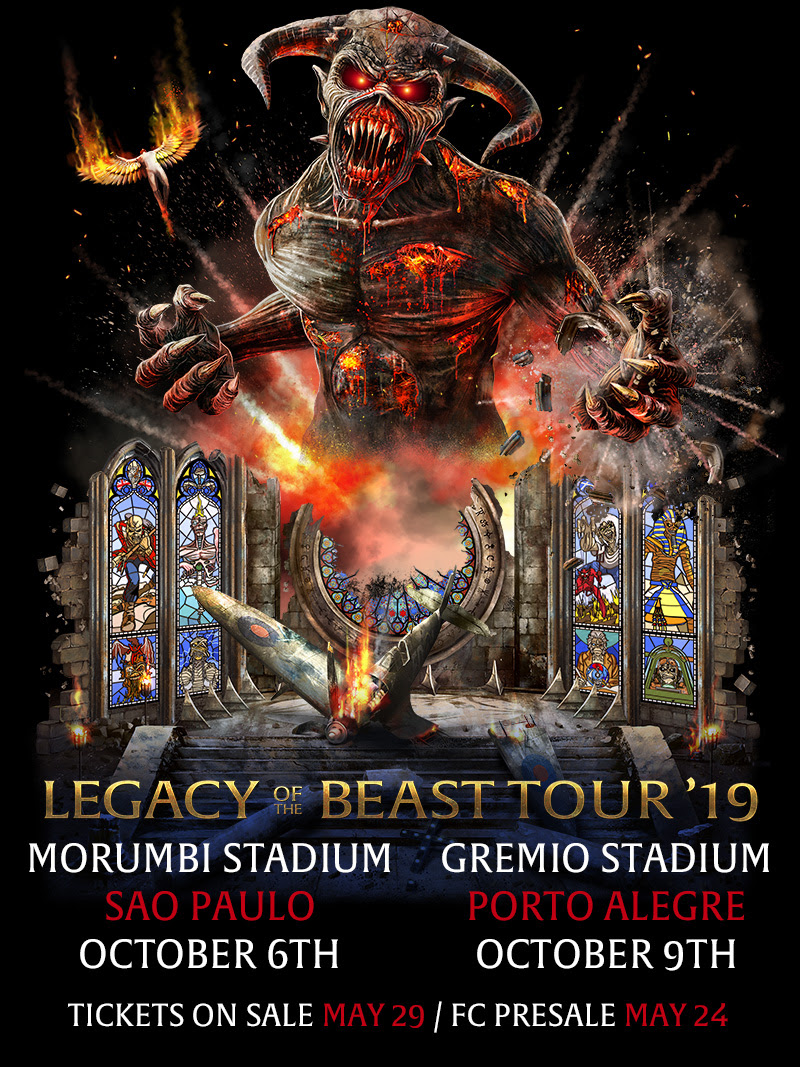