After years of hosting the Bonnaroo Music & Arts Festival, a new music festival will be hitting the Great Stage Park in Manchester, Tennessee this October,  presented by C3 Presents, AC Entertainment, and hosted by popular rock radio personality Eddie Trunk.

Exit 111, a brand new rock music festival with car shows, motocross, and a handful of onsite experiences that will be sure to intrigue native Tennesseans and nearby rock fans alike. When starting a new festival, the first year is the most pivotal one. You must have a killer lineup, and lots of things to do for people to want to comeback. 111’s producers have no doubt conceived a lineup so good that you’d be dumb to miss it.

The festival kicks off on Friday October 11th, with a day full of a wonderful concoction of different types of rock. The southern hard rock group Black Stone Cherry will be rocking out earlier in the day with their eclectic mix of riffs and raspy southern vocals. After them comes guitar legend Zakk Wylde’s hard rock quartet Black Label Society, who will be sure to melt the faces off of everyone from the front row all the way to the back. Next up comes the South African natives Seether, who I have personally seen multiple times, and will be sure to put on a great show. History will even be made this night as Slayer will play their last Tennessee show ever! At the very end of the night, iconic southern rockers Lynyrd Skynyrd will take the stage, and I’m willing to bet they will play their terrific catalog of hits and slow jams.

The next morning will kick off with a bang as the wonderfully socially conscious punk rock band FEVER 333 take the stage, after a year filled with killer festival “demonstrations” that have left a lasting impact on everyone who witnessed one. Soon after, emo favorites Sleeping with Sirens will perform a set filled with their delightful mix of post-hardcore and pop-punk. Mastodon will also be playing a undoubtedly great set, with their unique and revered progressive rock sound. Theatrical Swedish occult rockers Ghost will take the spot right before the headliner, with a guaranteed face-melting experience. Ending the night will be legendary British rockers Def Leppard.

Sunday is the day where the heaviest music lies. From Ashes to New will be one of the first bands of the day, with their trademark nu metal sound. Next up will be Christian rockers Skillet which combine a mix of insane riffs and John’s signature raspy vocals to create a perfect amalgamation of early 2000’s nu metal, late 2000’s hard rock, and 90’s progressive rock. American metal legends Lamb of God will make guarantee the biggest mosh-pit to ever happen in Tennessee lands, meanwhile prog-metal stalwarts Coheed and Cambria will surely bring a set-list loaded with songs from their newest record, Vaxis – Act 1: The Unheavenly Creatures. Towards the ending of the event, two epic bands will take the stage. First comes 90’s metal forefathers Deftones, who are currently in the writing process of a new record that may hopefully be out before the festival. Then, the last band to hit the stage will be good ole’ Guns N’ Roses, which are expecting their massively successful “Not in this Lifetime Tour” with a few handful of dates this year.

Ticket prices are be as follows:

Camping spaces for cars, tents, and RVs start at just $50.00 and include 4 nights’ stay in the Exit 111 campgrounds. camping passes also allow patrons re-entry privileges to and from the festival site all weekend long.

With the mix of wonderful artists, on-site activities, and various food and drink options, fans will be sure to have a wonderful time at the first year of this stellar festival. If you are planning to attend  and you’ve got  a lot of ground to cover, visit this location and turn up the volume and listen to the lineup broken down by each day!

Any additional information can be found at www.exit111festival.com 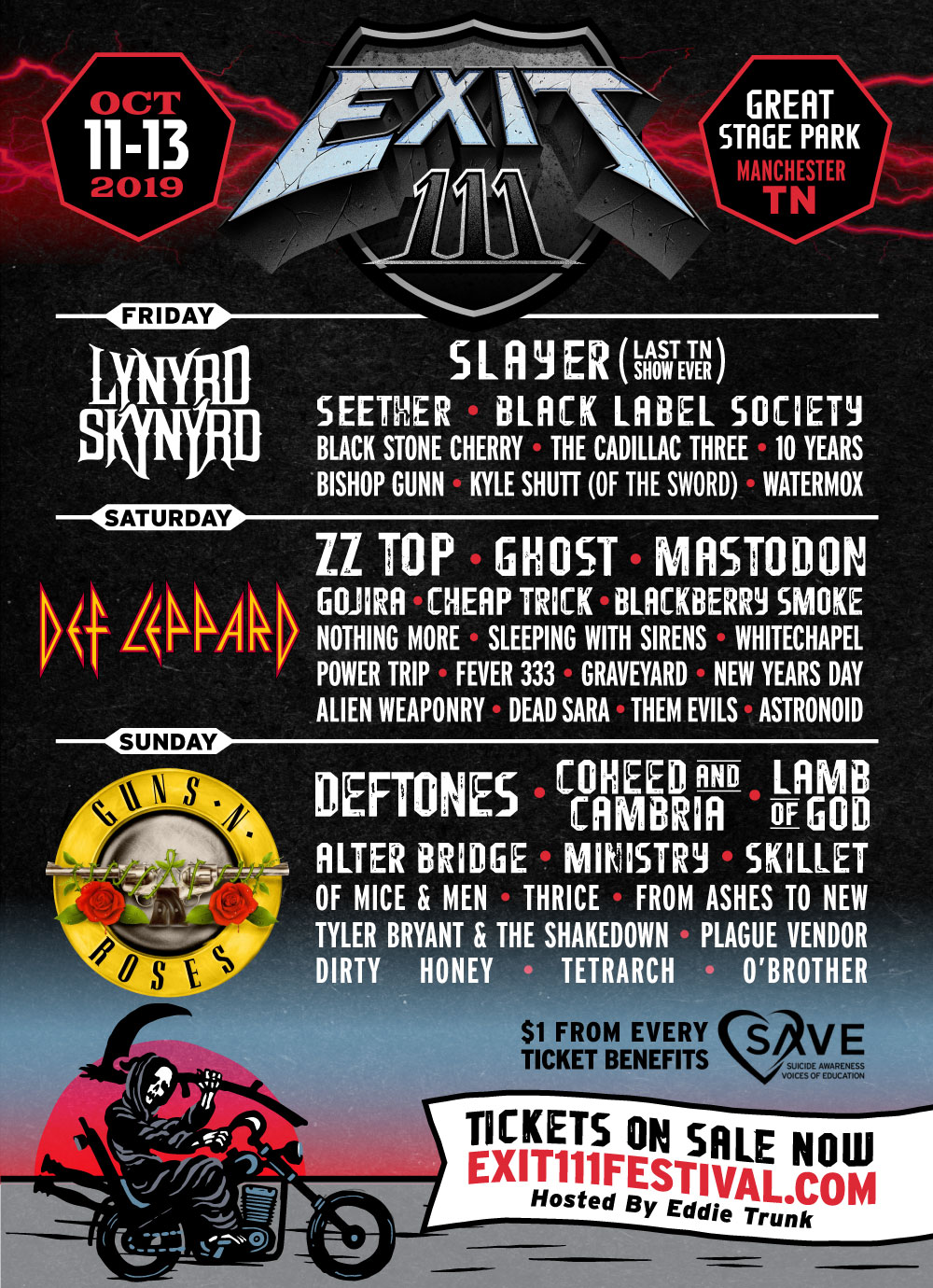