Hellyeah has announced the upcoming “Perseverance” tour of the US with All That Remains, Butcher Babies, Saul and Deepfall. These headline shows will lead the band to the radio festivals they are set to play all around the US this Spring. Tickets will go on sale, Friday, February 21st, 2020 at 10 AM local time for the tour at www.hellyeahband.com.

SIRIUSXM’s Octane has started playing the track “Oh My God” from “Welcome Home” in honor of the band’s perseverance. Kyle Sanders explained the urge to hit the road and promote “Oh My God”: “While Vinnie Paul is obviously irreplaceable, one thing we can’t not do is tour. As easy as it would be to say we’re not going on the road, we have to. Vinnie would be extremely disappointed in us if we didn’t promote this record properly.”

“We are hitting it hard this spring and we’re excited it’s with Hellyeah , Butcher Babies and Saul. We’ll be on the road in the U.S. most of the spring so make sure you get tickets now cause these shows are not to be missed!” – states Phil Labonte of All That Remains

“After a year of writing, Butcher Babies are excited to return to the stages across America. To tour with Hellyeah and All That Remains seems like a natural progression for the band as we’ve been friends for years. We’re elated to finally hit the road with these powerhouses. With an onslaught of new music and our explosive live show, we’re more than ready for a triumphant return! “ – says the Butcher Babies.

“It’s an absolute honor to be apart of a tour with such monumental and inspiring musicians. We’re excited to break down the doors for 2020 and meet every Equal we can.”– Zach of Saul adds.

Hellyeah was formed in 2006 by Pantera founder/drummer Vinnie Paul, singer Chad Gray (Mudvayne), and guitarist Tom Maxwell (Nothingface) with bassist Kyle Sanders (Bloodsimple) and guitarist Christian Brady, who joined in 2014. The band has released five albums, culminating in the #2 Hard Rock album release “Unden!able” in June 2016. Their final album with Vinnie Paul, “Welcome Home” – a truly stunning album that does both Vinnie’s memory and groundbreaking legacy proud – was released on Friday, September 27, 2019 through Better Noise Music. The album features the late Vinnie Paul’s final recordings and is comprised of 11 tracks, driven by their love, loyalty, reverence and respect for their fallen brother. The album debuted at #2 in Hard Rock Albums and #10 overall, with a coordinated campaign to benefit the American Heart Association attached to the release. The band forges onward to honor their fallen brother, Vinnie Paul. You can also read our review of the record here.

HELLYEAH & ALL THAT REMAINS (With Butcher Babies, Sail and Deepfall) Tour Dates: 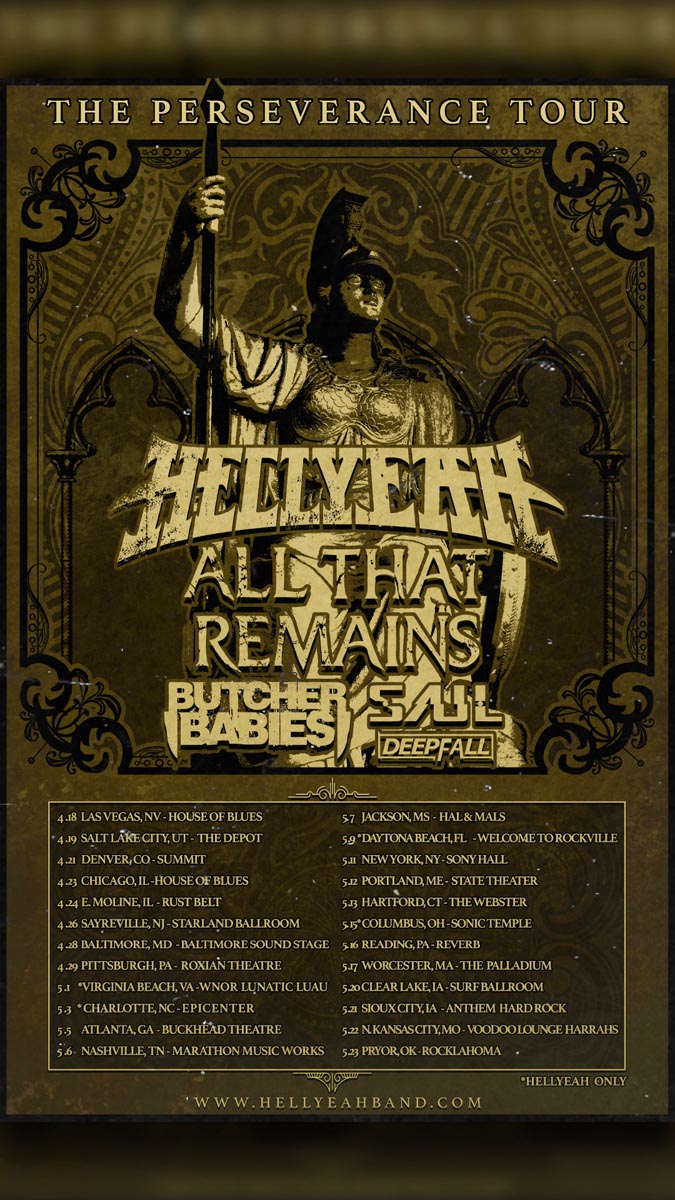