TRENDING
Following a successful launch over the summer, Metal Injection‘s virtual Slay at Home fest will be returning as a monthly installment! In addition to a set from GREEN CARNATION, members of GARGOYL and CARNATION will each be performing cover collaborations.

This month’s Slay At Home is set to stream live FREE on Friday, September 25th at 3:00 P.M. EDT // 9:00 P.M. CEST, via the Metal Injection YouTube page in support of National Alliance On Mental Illness for Suicide Prevention Month.

Norwegian progressive rock icons GREEN CARNATION will be supporting their 2020 release, ‘Leaves of Yesteryear,’ which can purchased HERE. Watch the video for the title track HERE.

Old school death metal revivalists CARNATION will be supporting their freshly released full-length, ‘Where Death Lies,’ which is available for purchase and streaming HERE. Watch the video for “Sepulcher of Alteration” HERE.

Experimental progressive grunge act GARGOYL will be supporting their upcoming debut full-length, which is due on October 9! Pre-order it HERE. Watch the video for “Plastic Nothing” HERE. 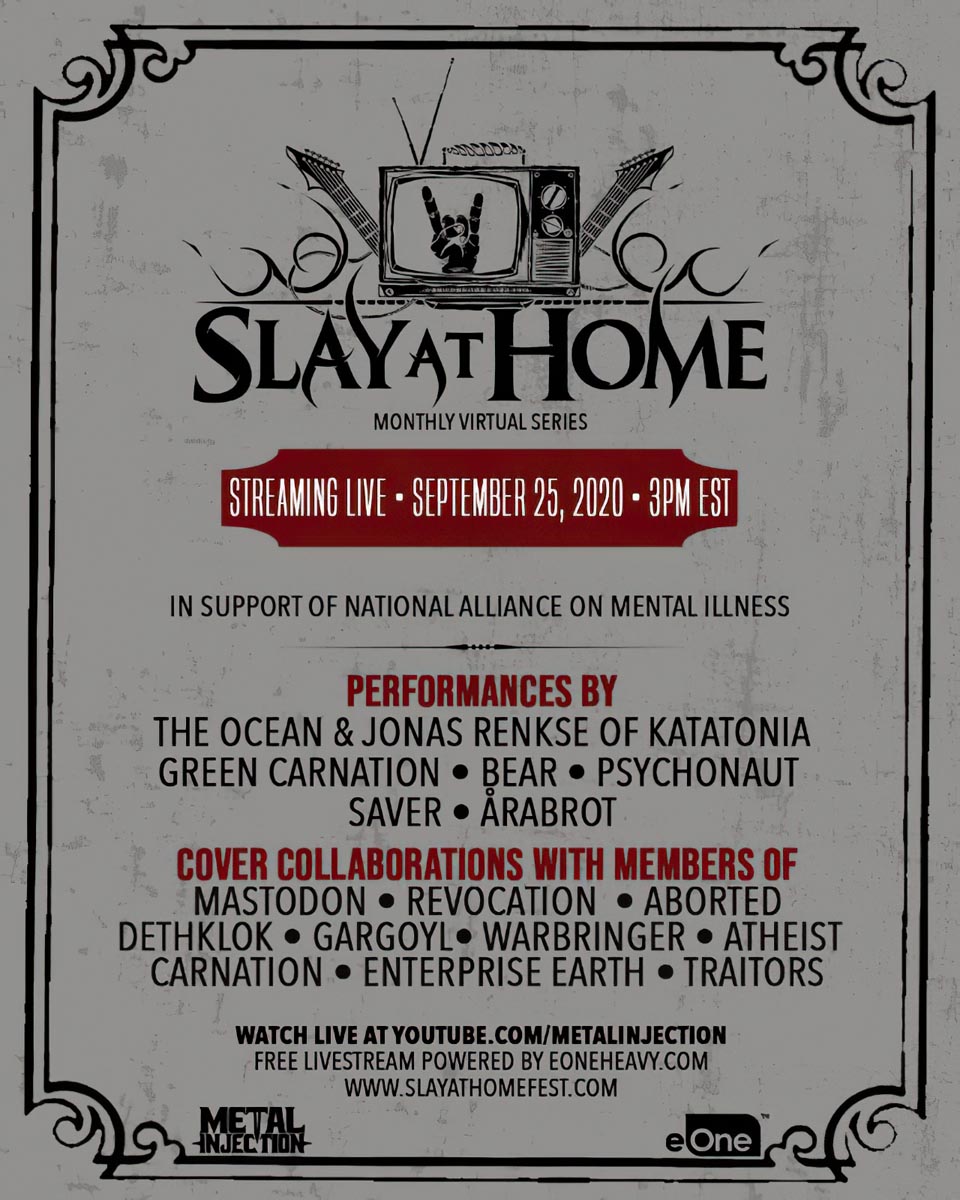 About GREEN CARNATION:
The earnest progressive metal group GREEN CARNATION unveil ‘Leaves of Yesteryear,’ the first new music from the band in 14 years. More approachable than the Norwegian’s work in the metal bands IN THE WOODS, EMPEROR, and TRISTANIA; their unpretentious, punchy and smart sound appeals to broad swaths of the rock community.  ‘Leaves of Yesteryear’ serves as both a retrospective look at the band’s storied career while setting the foundation for their future.

About CARNATION:
Belgian death-dealers CARNATION return with the ripping new full-length album ‘Where Death Lies.‘ Their aural violence, steeped in the influence of the halcyon days of early Scandinavian death metal, is strong and direct and delivered with modern, neck-snapping ferocity. With ‘Where Death Lies,’ CARNATION have perfected the iron discipline of brutal death metal.

About GARGOYL:
GARGOYL’s unique blend of elegant prog and familiar grunge gestures side-steps any one genre. The new band forges their own path through the musical ether with subdued exploration that explodes into driving backbeats and ringing vocal harmonies. Featuring Luke Roberts from the dynamic AYAHUASCA on guitar and vocals alongside the virtuosic talent of REVOCATION mastermind Dave Davidson, this fresh collaboration sees them expand their repertoire to create something fresh, fascinating and far-reaching.