Sean Reinert, longtime drummer for progressive/technical metal pioneers CYNIC, was found unresponsive at his California home last Friday night (January 24). No cause of death has yet been revealed. He was only 48 years old.

Reinert was transported to a hospital, but after life-saving measures proved ineffective, he was pronounced dead upon arriving. No foul play is suspected at this time. However, an official cause of death is pending an autopsy, which hasn’t been conducted yet.

Reinert was a founding member of CYNIC, along with guitarist/vocalist Paul Masvidal, and he remained in the group until September 2015. In 1991, Reinert and Masvidal joined the legendary Florida band DEATH to record the “Human” album. After touring with DEATH, they returned to CYNIC. 1993 saw the release of CYNIC‘s debut album, “Focus”, which is regarded as a landmark LP in the field of technical/progressive metal. After CYNIC‘s initial split, Reinert and Masvidal relocated to Los Angeles, where they continued working with music by writing and performing for television shows and motion pictures. 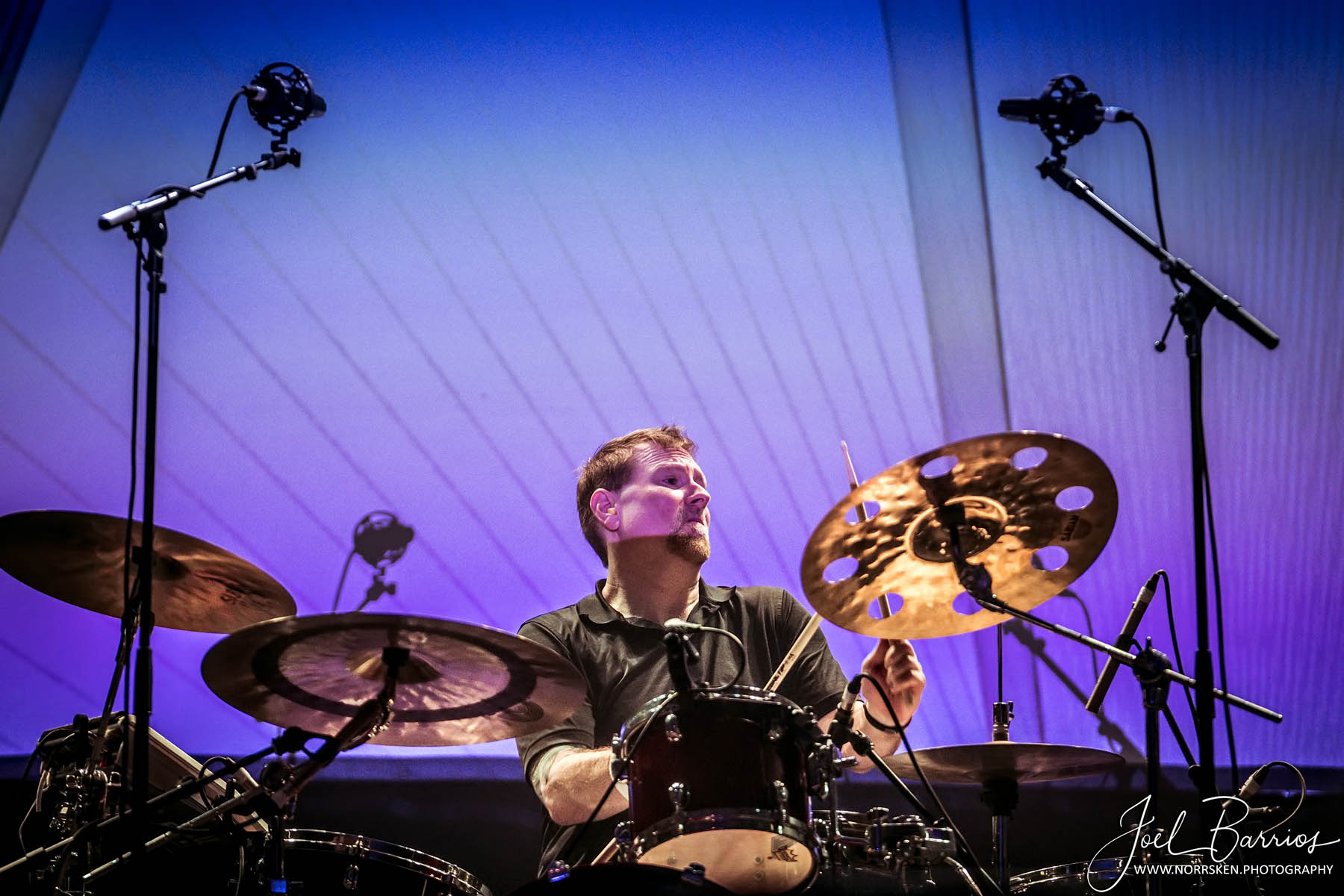 Reinert played his last shows with CYNIC in September 2015 in Japan. After his exit from CYNIC, Sean was involved with the Los Angeles progressive rock group PERFECT BEINGS, whose latest album, “Vier”, was released in January 2018 via InsideOut Music. The last time he played was PERFECT BEINGS was during the Rites of Springs Festival (RoSFest) on May 5th, 2018. A picture gallery of that night can be seen here and at the end of this article.

CYNIC guitarist/vocalist Paul Masvidal commented on the passing of the band’s longtime drummer Sean Reinert.  He took to his social media yesterday to write: “I am shocked and saddened by the loss of one of my oldest friends. We were karmic brothers, connected by something beyond both of us.

“So many memories have been flooding my heart and mind. From the moment I first met Sean in junior high school, I knew we had a connection. His gifts were beyond measure, and I’m grateful that we were able to make music together.

“In the end, all that remains is love, and that’s what I have for Sean. There will never be another one like him. Peace to his family and all of his fans around the world.

“Listen to Sean play his drums and hear his heart sing.” 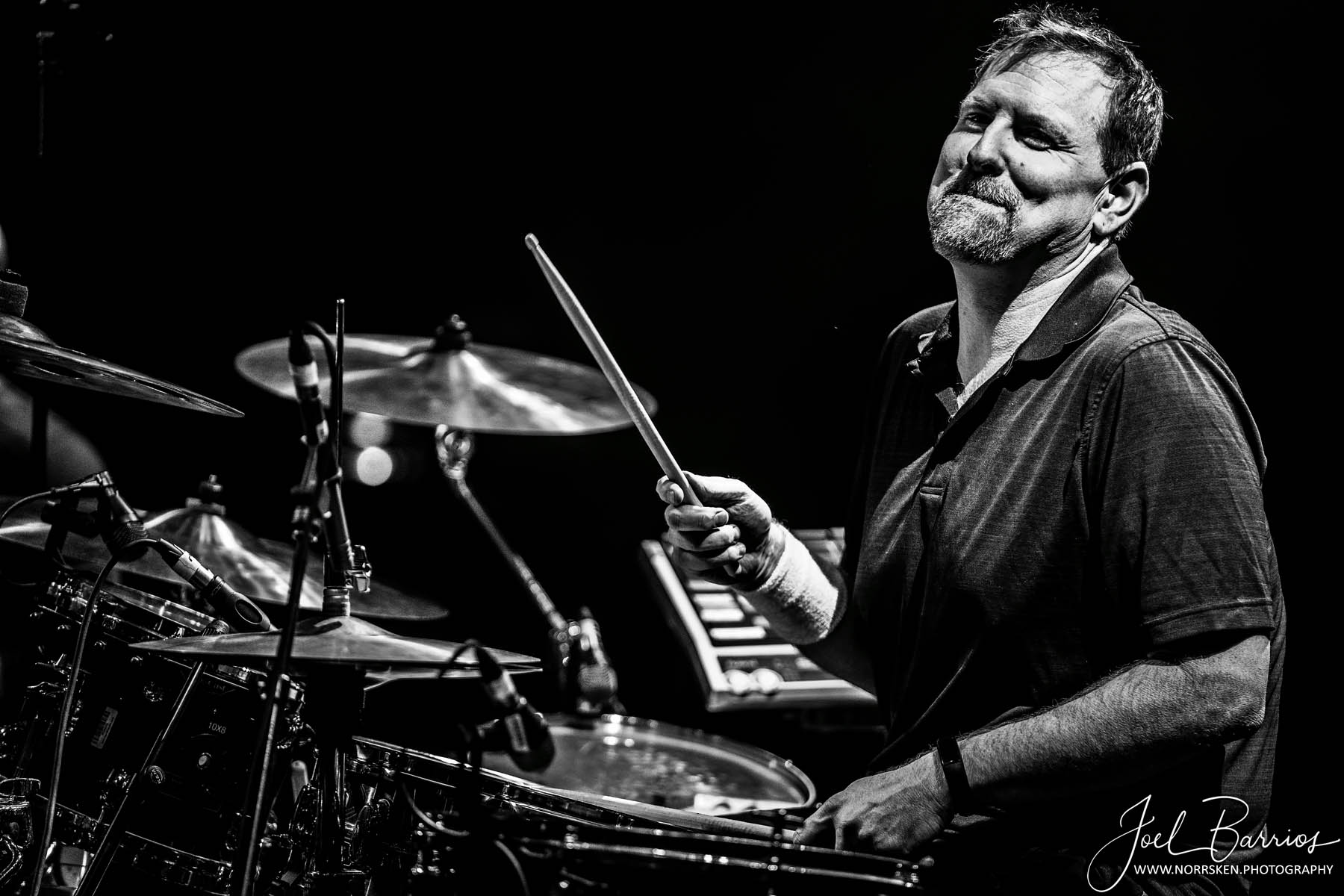 Sean Reinert‘s husband Thomas Snyder also issued a statement on the influential drummer’s passing. He wrote: “I’m broken. As many of you now know, my husband Sean passed away last night. Some of you in the inner circle I was able to reach via phone last night and this morning to try to let you know what happened before it spread across social media. For those I couldn’t reach to tell you myself I’m sorry.

“I’m still trying to put together the events of the last 24 hours. After coming home from work last night I found Sean unresponsive on the floor, I administered CPR with the assistance of the 911 operator and he was taken to a local hospital via ambulance. There is no cause of death and an autopsy will be performed.

“Sean and I just completed our yearly physicals about 3 weeks ago and we were both in good health. Sean did not have any sort of drug abuse issues and I’m still in a state of disbelief. I can’t begin to comprehend how my life and the lives of Seans close friends and family have just been shattered.

“It feels strange to even have to make this post over such a private matter but I understand Sean was a public figure and beloved by many around the world.

“For myself, Sean’s family and close friends I ask that you please give us time to grieve. The fans he adored so much lost an influence and phenomenal drummer. Some of us lost our Husband, Son, Brother, Uncle and Best Friend. 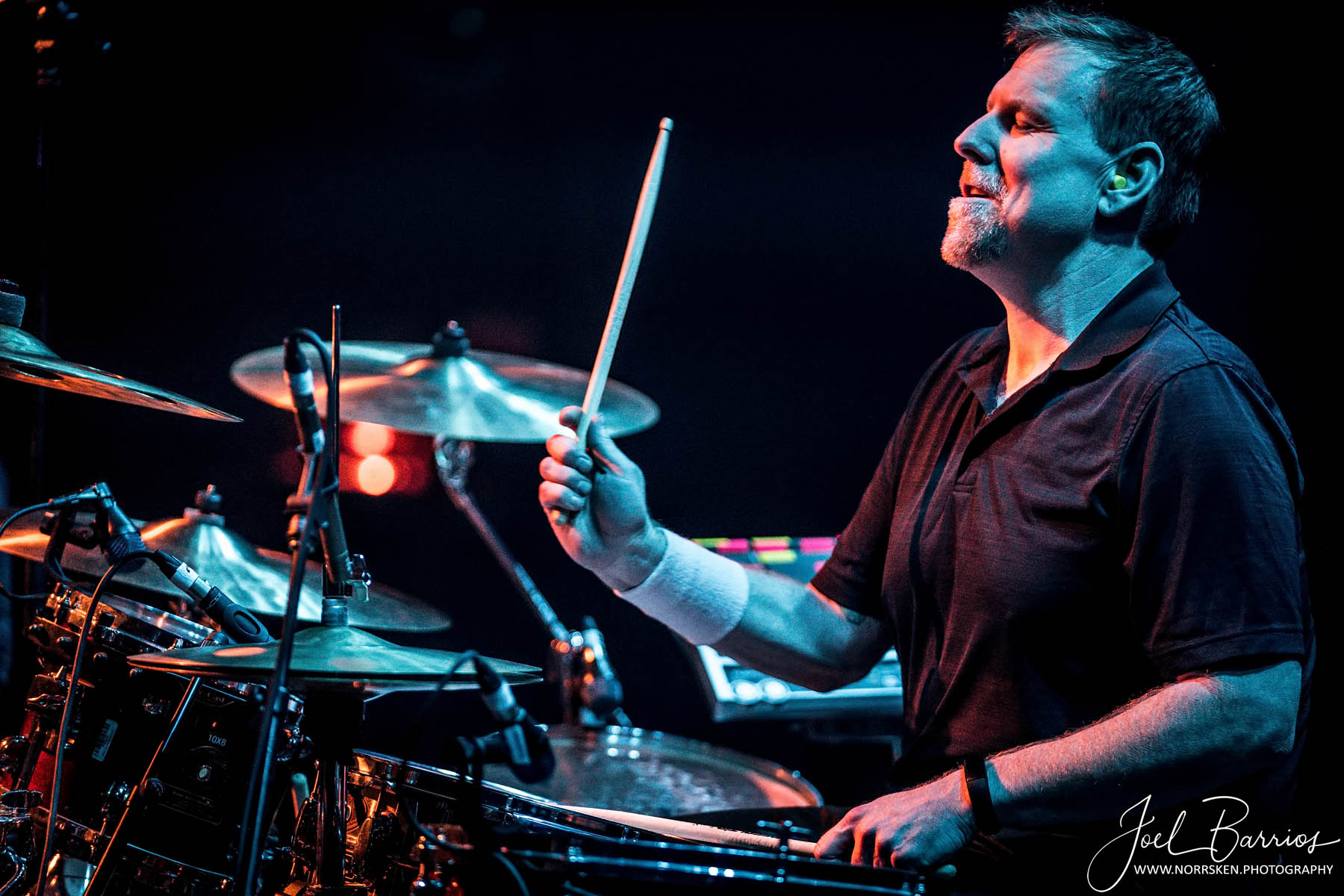 FELLOW MUSICIANS REACT TO THE NEWS

Several personalities from the music world have expressed their condolences and thoughts on the untimely death of Reinert.

Former SOILWORK and current MEGADETH drummer Dirk Verbeuren took to his social media yesterday to write: “The world lost a true legend and a beautiful soul. Sean Reinert‘s innovative, dynamic, soulful playing on [DEATH‘s] ‘Human’ and [CYNIC‘s] ‘Focus’ completely changed the game of metal drumming. As a teenager, I went out and bought my first splash cymbal after hearing Sean use his splashes so beautifully. No one played like him and to many, including myself, Sean is the ultimate reference when it comes to creativity and swing in metal drumming.” 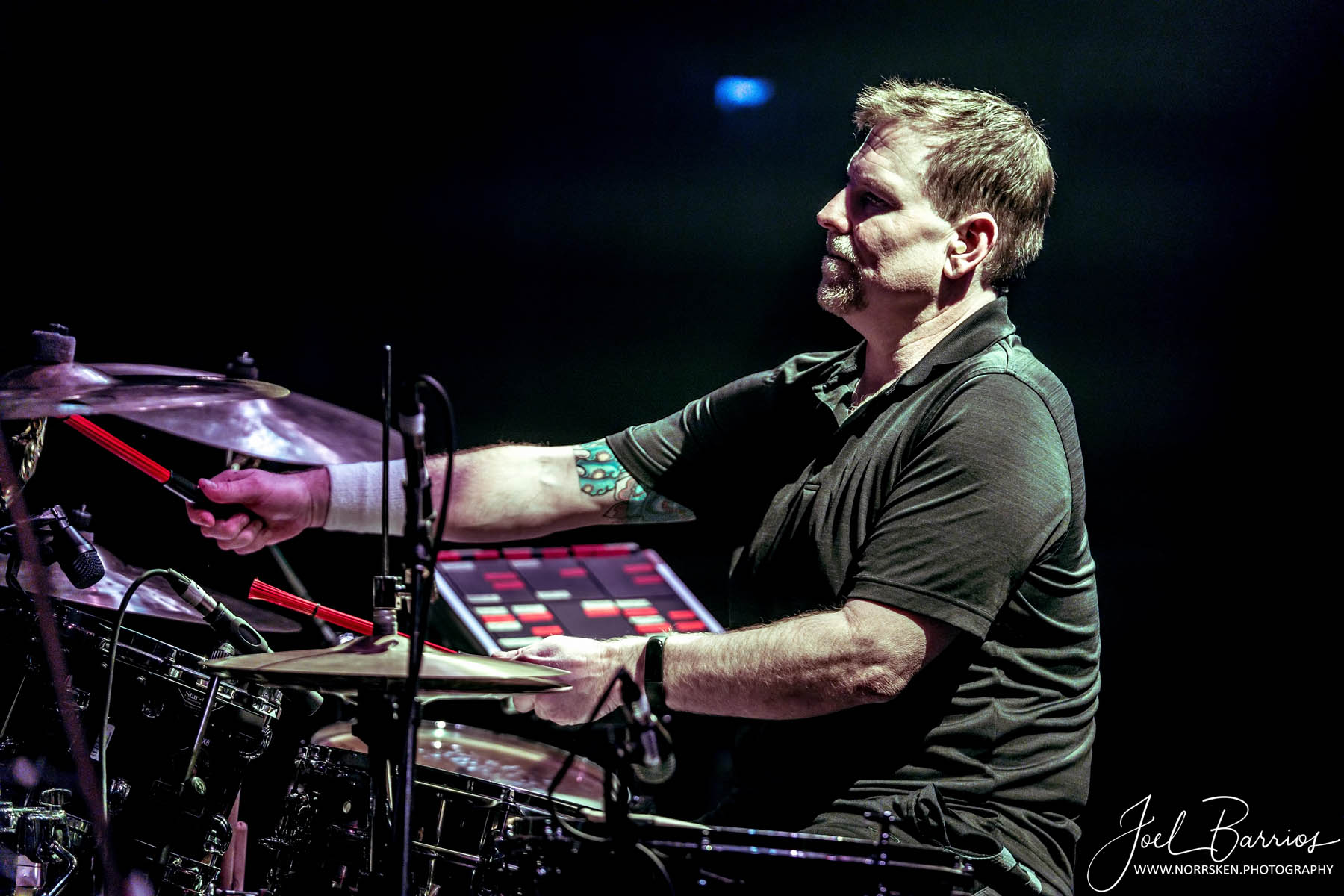 Former FLOTSAM AND JETSAM and current OVERKILL drummer Jason Bittner also paid tribute to Sean Reinert, when he wrote: ” I’m trying to really find all the words to sum the last week or so up, just as we were starting to mend from Neil [Peart], this happens.

“I can’t explain just how much Sean meant to all of us in the metal community, and the drumming community alone — this guy was definitely NOT ‘just a metal drummer.’ Read all the posts about him and you will know. Neil influenced all of us to be play more fills and be experimental, and Sean took it to the Nth degree with everyone he played with, and he became a ‘Neil Peart‘ type influence for the metal world. Go back and look at my first Modern Drummer feature — two of my Top 10 drumming albums are his — DEATH ‘Human’, and CYNIC‘s ‘Focus’. Absolute stellar performances, unplayable by most of us mere mortals. I’m still trying. But on top of all this Sean was an awesome, awesome guy — just a laugh riot to hang out with.

“There’s a contingent of people over the last decade who have become the ‘Sickdrummer Magazine family/clique/gang’ at NAMM, — Anton Hefele, Ian Macdonald, Derek Roddy, Gus Rios, Forrest Robinson, Brian Zink, myself, Tim Yeung, Matt Thompson, and a rotating cast of characters depending on the year — but there was always ONE GUY we were hoping was ‘coming to the show this year’, and that was Sean Landon Reinert — he was just that respected and loved by us, and by the drumming world.

“I was lucky enough to become friends with him back in probably 2005/6, and we always stayed in contact, and saw each other when the tour or NAMM permitted, or if I was just in CA for other business, we always made it a point to hang if possible — the last time I saw him was when he came to see me play in FLOTSAM AND JETSAM at the Whiskey in LA. We had just drove in all night from AZ,no sleep, I was TMing too, and just exhausted by time I took the stage — the only thing that was keeping me going was the fact of ‘dude, Sean is watching, you BETTER bring it!’ I did to my best ability, and he told me so after the show…… ‘dude you kicked ass’ — I still think he was just being nice!!

“RIP Sean — I hope you’re up there trading 7’s with ‘The Professor’ right now — or at least drinking some of his Macallan!! We all love and miss you already!!!!”

On Saturday, Mike Portnoy tweeted: “Absolutely shocked to hear of the passing of Sean Reinert. I watched him play every single night when CYNIC supported [DREAM THEATER] in 2009 and was always in complete awe. He was an outstanding drummer and a really nice guy. Way too young to leave us…RIP my friend”

Absolutely shocked to hear of the passing of Sean Reinert. I watched him play every single night when Cynic supported DT in 2009 and was always in complete awe. He was an outstanding drummer and a really nice guy. Way too young to leave us…RIP my friend 😞 pic.twitter.com/kLmYorhcHo

PERFECT BEINGS at The Rite of Springs Festival  (2018)