TRENDING
US thrash metal legends EVILDEAD released their first single and lyric video for the song “The Descending” today. The song is taken from their new studio album “United $tate$ Of Anarchy”.
In 2019 EVILDEAD secured a new recording deal with SPV/Steamhammer for their upcoming release entitled “United $tate$ Of Anarchy.” It will feature nine studio tracks plus a metalized cover version of the B-52’s ‘Planet Claire’ as a bonus track, all produced by Bill Metoyer. Seminal artist Edward J. Repka has once again illustrated the cover of the new album. With “United $tate$ Of Anarchy,” EVILDEAD has returned more powerful than ever and awakened again to annihilate the masses.
“United $tate$ Of Anarchy” will be released as a CD DigiPak version, LP version, download and stream on October 30th, 2020 through SPV/Steamhammer. Album can be pre-orderd now at this location.
EVILDEAD was formed in 1987 with the intention to create heavy music in the thrash metal vein. The EVILDEAD sound was unique; highlighting a blend of speed and thrash metal guitar riffs along with hyper drumming locked in with an over the top thundering bass with punk overtones, and lyrical themes that explored political, thought provoking social ideas; mixed with horror, and nuclear war themes. 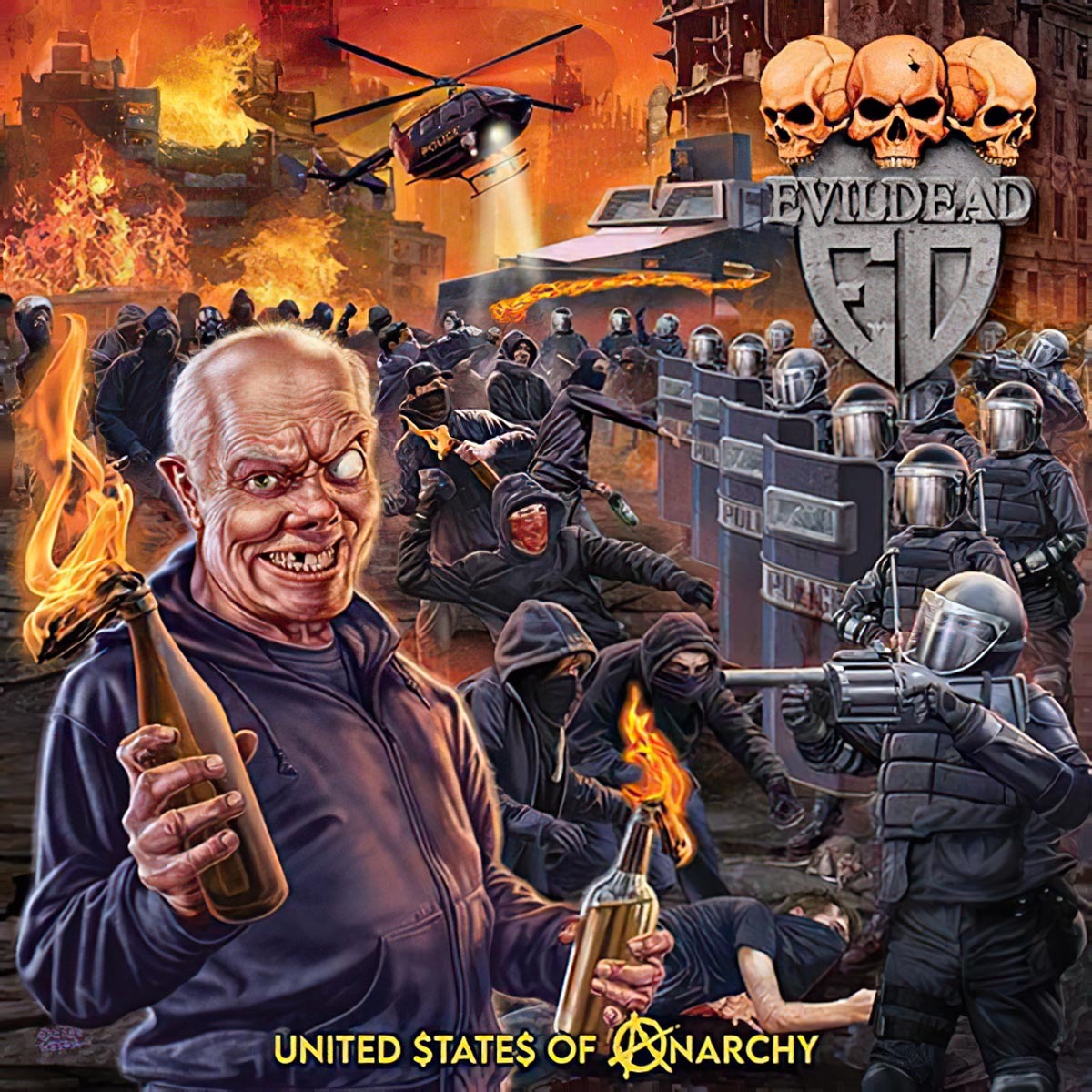 In 1988, EVILDEAD signed a worldwide recording contract with SPV/Steamhammer and released the “Rise Above” EP featuring two original tracks; along with a cover version of the Black Flag anthem ‘Rise Above’. In the summer of 1988, EVILDEAD entered Music Grinder recording studios with Producer/Engineer Cacey McMakin (Nuclear Assault, Kreator) to record the classic full-length album “Annihilation of Civilization.”

In 1989 the band had some line-up changes along the way before their first successful European tour with co-headliners Laaz Rockit. In 1990 EVILDEAD returned to the recording studio with producer Warren Croyle to track their second studio album entitled “The Underworld” released in 1991 to rave reviews. After releasing their follow up release “Live… From the Depths of the Underworld” the band disbanded in 1992 with members pursuing other projects.
EVILDEAD is: