The long-awaited new studio album of DORO will be released on August 17th, 2018 via Nuclear Blast! Today, the metal queen has announced the title of the follow-up to her hugely successful release Strong & Proud (2016, #1 Finland, #2 Germany, #3 UK & Sweden): Get ready for Forever Warriors, Forever United!

DORO‘s 20th album promises to be a huge milestone as the band’s first-ever double album, so fans can expect 24 brand new songs from the metal queen, which will also undoubtedly feature some stunning surprises. The album cover artwork was once again created by DORO‘s favorite artist Geoffrey Gillespie. It portrays DORO in the middle of a swarm of wild metal heads exuding attitude, power and a lot of positive vibes. Guitarist Doug Aldrich (WHITESNAKE, DIO, DEAD DAISIES) and former WARLOCK guitarist Tommy Bolan, who also contributed to the highly acclaimed album Triumph & Agony in 1987, will also be part of the new album. 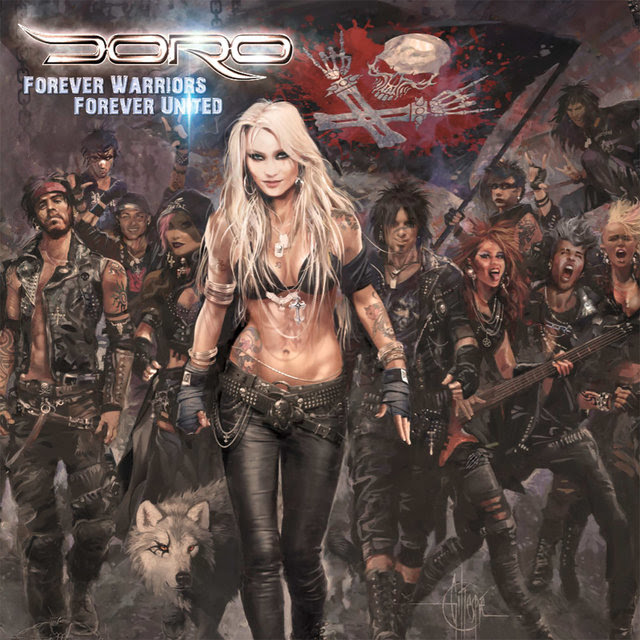 “The cover and the title form a perfect unit,” DORO explains, “Just as it should be. It all fits perfectly in line with the songs, which also deal with some political themes. There are some big anthems on the album, countless heavy songs, as well as heart-warming melodies! The album is supposed to give you power and thus contains a lot of energy! On Forever Warriors, Forever United, there will be a lot of big rock heroes. Fans might be curious about the many awesome guest musicians involved.”