Click here to check out DIRTY HONEY‘s cover version, available now only on Amazon Music. Also available is in-studio, behind-the-scenes video footage of the recording, as well as Labelle discussing the track, DIRTY HONEY‘s connection to AEROSMITH, and working with Cobb, which you can watch below.

Said Labelle: “AEROSMITH has been a huge influence on our band, and ‘Last Child’ is a staple in our live set, so to be tipping our hat to the band is really special. Plus, we’re all big fans of the way Dave makes records. He does it live, he tracks live, he does minimal overdubs, and we love that. Our goal has always been to make music that has soul, that has a live feel, and has a performance element to it instead of perfectly in-tune vocals and perfectly played guitar solos. That’s our philosophy for everything we do, we’re trying to capture performance, not perfection.”

Launched in September 2019, Amazon Music HD provides customers with the highest quality, with more than 50 million songs in High Definition, millions of songs in Ultra HD, and a growing catalog of 3D Audio. DIRTY HONEY‘s “Last Child” is available in Ultra HD, (better than CD quality), with a bit depth of 24 bits and a sample rate of 96 kHz.

DIRTY HONEY hits the road today on the first leg of its 2020 “Rolling 7s” North American tour. The 25-date, coast-to-coast trek kicks off in Austin, Texas at The Parish and wraps up six weeks later on February 28 at the El Rey Theatre in Los Angeles. Hotly tipped UK rock outfit THE AMAZONS will open on all dates. 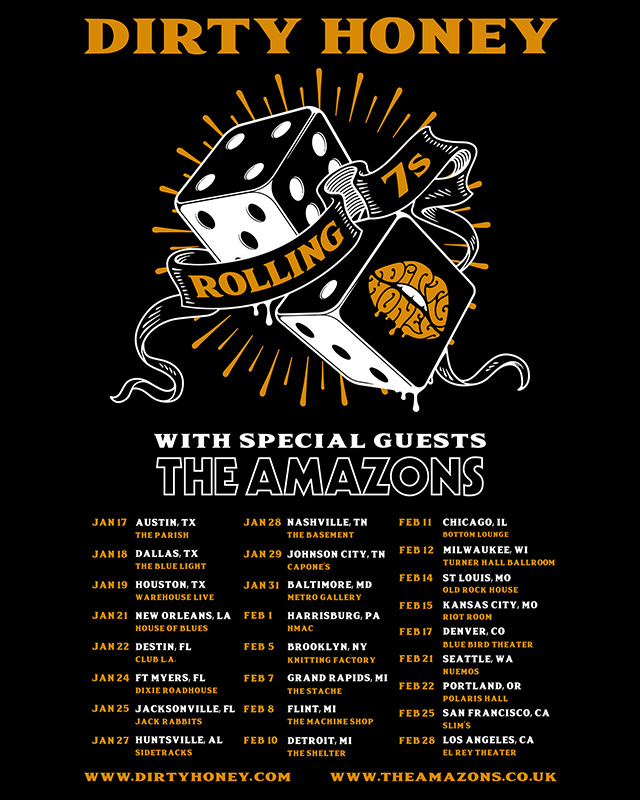