GRAMMY® Award-winning singer / songwriter Corey Taylor has dropped a brand new teaser featuring footage from show rehearsals and giving fans a taste of the pyro-laden spectacle that awaits. The show, filmed at iconic Los Angeles venue, The Forum, kicks off at 2pm PDT/5pm EDT on October 2nd in celebration of the release of Corey’s debut solo album “CMFT“, also out October 2nd. Watch the new trailer below.

Tickets are still available from watch.thecoreytaylor.com Ticket holders will have unlimited, on demand access to the show for a 72 hour window after the initial broadcast and access to exclusive event merch and bundles. For those who missed getting a ticket for the initial broadcast, tickets will be available for the duration of the 72 hour viewing window. Ticket bundles are also available including a t-shirt, hoodie, poster, and access to watch an exclusive Corey Taylor acoustic set. A limited number of one-on-one video chats with Corey Taylor are also available with some bundles.

Forum Or Against ‘Em will be a full arena production complete with a visual feast of pyrotechnics, a stacked set list featuring all tracks from “CMFT,” select fan-favorite cuts from Taylor’s Slipknot and Stone Sour catalogues, a handful of covers and an incendiary guest performance from rock n’ roll girl-gang dance squad, The Cherry Bombs. Kicking off the event’s festivities will be a special pre-show event hosted by presenter/journalist, Beez that will feature exclusive interviews and behind-the-scenes footage, starting at 1pm PDT/4pm EDT on Corey’s Facebook Page.

Speaking about his upcoming streaming extravaganza, Corey Taylor says “I’ve been saying since the beginning I’d find a way to bring this music and this band to the people. And I’m honored that The Forum let us do just that. It’s CMFT in its entirety. It’s songs I’ve shared over the years. It’s a celebration, and I’m so stoked to party with all of you.”

In the rapidly evolving sphere of streamed events, Forum Or Against ‘Em is set to be an industry first, as Corey Taylor and his management team at 5B Artists + Media partner with Danny Wimmer Presents, the largest independent festival producer in the United States, to put on this one-of-a-kind, pay-per-view concert experience. In utilizing The Forum for this special steaming event, the team are not only able to put together a world class rock extravaganza with a massive arena production, in total, they are also providing work to approximately 80 event staff. 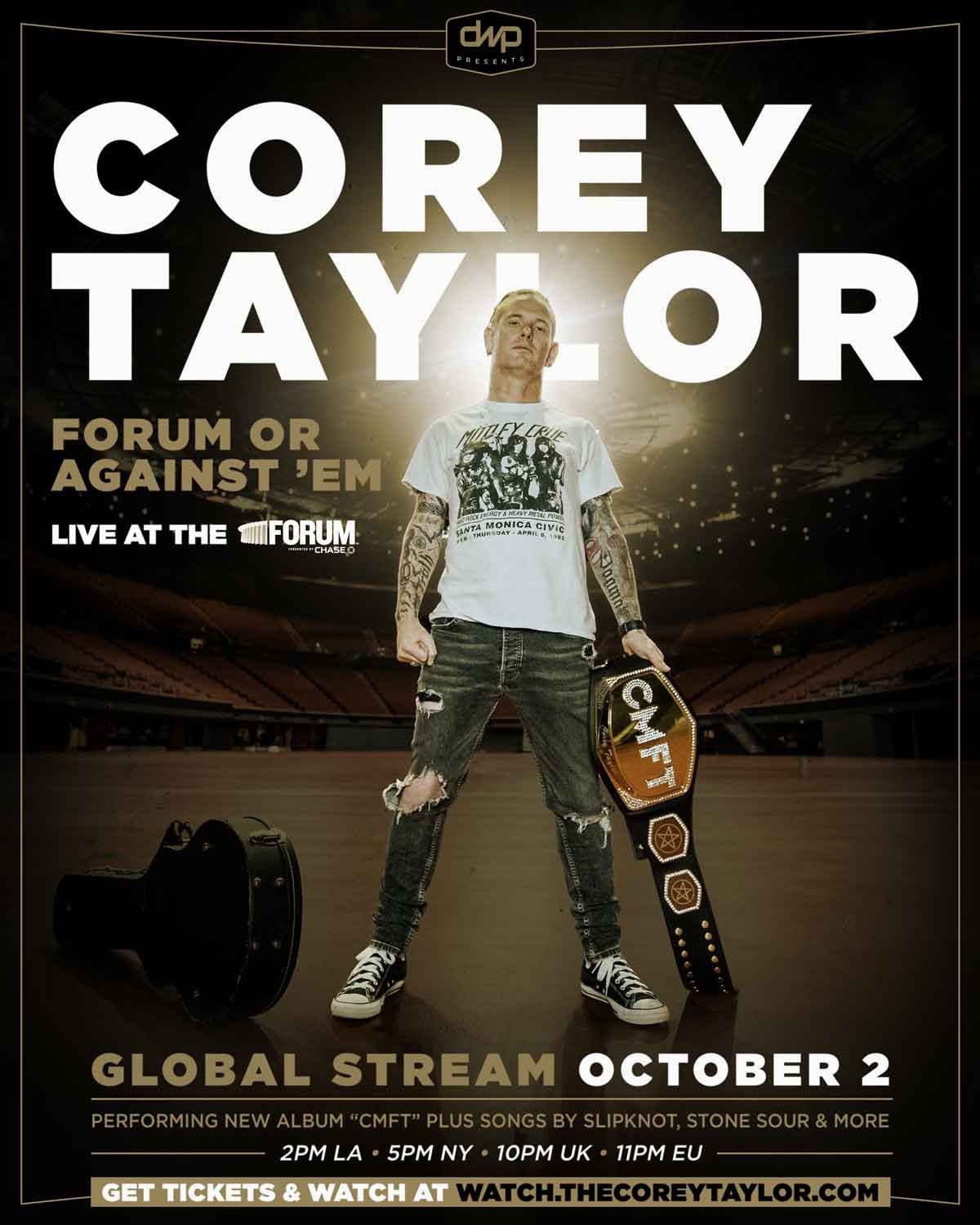 Taylor’s debut solo album, “CMFT,” is set for release on October 2nd via Roadrunner Records. Garnering widespread critical applause already, FORBES declare, “Corey Taylor’s singing is undeniably the best it’s ever been. From Slipknot’s last album to his new solo material, Taylor is easily among the best sounding rock singers alive,” and KERRANG! describing the new material as “A celebration of life, and one that shows him in a whole new light.”

Taylor recently released a music video for “Black Eyes Blue,” which has entered the Top 10 at Active Rock Radio, surpassing previous first week chart numbers from both Slipknot and Stone Sour. Additionally, Taylor hit #1 on Billboard’s “Hard Rock Songwriters” chart following the unprecedented debut of lead singles, “Black Eyes Blue” and “CMFT Must Be Stopped” [feat. Tech N9ne & Kid Bookie], the latter of which has racked up in excess of 3 million YouTube views for its star-studded music video. He most recently unveiled his “HWY 666” with an official lyric video. All songs are available on all streaming platforms.

Pre-orders for “CMFT” are available now with limited edition vinyl and merch bundles available at www.thecoreytaylor.com.

On the fiery and fearless rock ‘n’ roll opus, Taylor touches on lifelong influences ranging from hard rock to classic rock, punk rock to hip-hop. “CMFT” has been a long time coming, with newly penned songs appearing alongside a few dating back to his teens. Recorded at Hideout Studio in Las Vegas, with producer Jay Ruston and his band – Christian Martucci [guitar], Zach Throne [guitar], Jason Christopher [bass], and Dustin Robert [drums]– the album traces a wild and exhilarating roadmap through Taylor’s musical psyche. Now, with Forum Or Against ‘Em, Corey Taylor is bringing his wildly diverse musical collection to life.