COMMUNIC are one of the household names in the European Metal scene and have been so from the beginning. The musical style of COMMUNIC is rich in both emotional depth and musical broadness and includes many elements from various metal genres. Catchy vocal melodies, thrilling bass and guitar lines colliding with power, thrash, progressive and a touch of doom and groovy metal.

The music has a progressive touch, experimental yet easy to listen to, moody, mellow and emotional, it includes mix of influences from the 80’s and 90’s metal scene, but most of all it’s a mix of the different approach each member of the band has on the music, thus giving it the unique sound and feeling, that makes it hard for fans and media to compare COMMUNIC to just one other band.

In the beginning of 2019, Oddleif was starting to write and put together new material for their 6th album. When most of the ideas and sketches for the songs where ready, the band spent a long weekend at a cabin by the shore in a southern fjord in Norway, where they set up their gear and some basic recording equipment to arrange the songs together. Already here at this remote place, away from distractions, the idea for the album title already emerged together with the core structure of the songs. By the end of the year, the guys went into Oddleif‘s Stoneland Studio to record a pre-production of the album.

In the end of January 2020, Tor Atle started to record the drums in Mayhem Studio in Kristiansand, Norway. Shortly after this the world wide covid-19 pandemic breaks out and everything shuts down, and the recording process stops for a while. In the beginning of March 2020 the band started again to record the bass, guitars and vocals in Stoneland Studio getting everything ready for mixing. At this time Travis Smith agreed to create the artwork for the album, and works on completing his ideas. Lasse Lammert at LSD-Studio in Germany has been assigned to be in charge of the mixing and mastering. The title for the album “Hiding From The World” fits into the time and state the world is in at the moment, but that was just coincidental.

Commented by Oddleif: ”The songs on this album is quite diverse, but true to the COMMUNIC style that we started out doing back in 2003. Long songs as we normally end up doing, only 7 songs in total and a short intro clocking in at over 60 minutes, that all holds the tension, emotions and dynamics that we like to do. There are some mellow and emotional, yet heavy songs, some really heavy songs, even some blast-beats, stuff that we have never have done before. A nice mix up of traditional COMMUNIC power and emotional depth.” 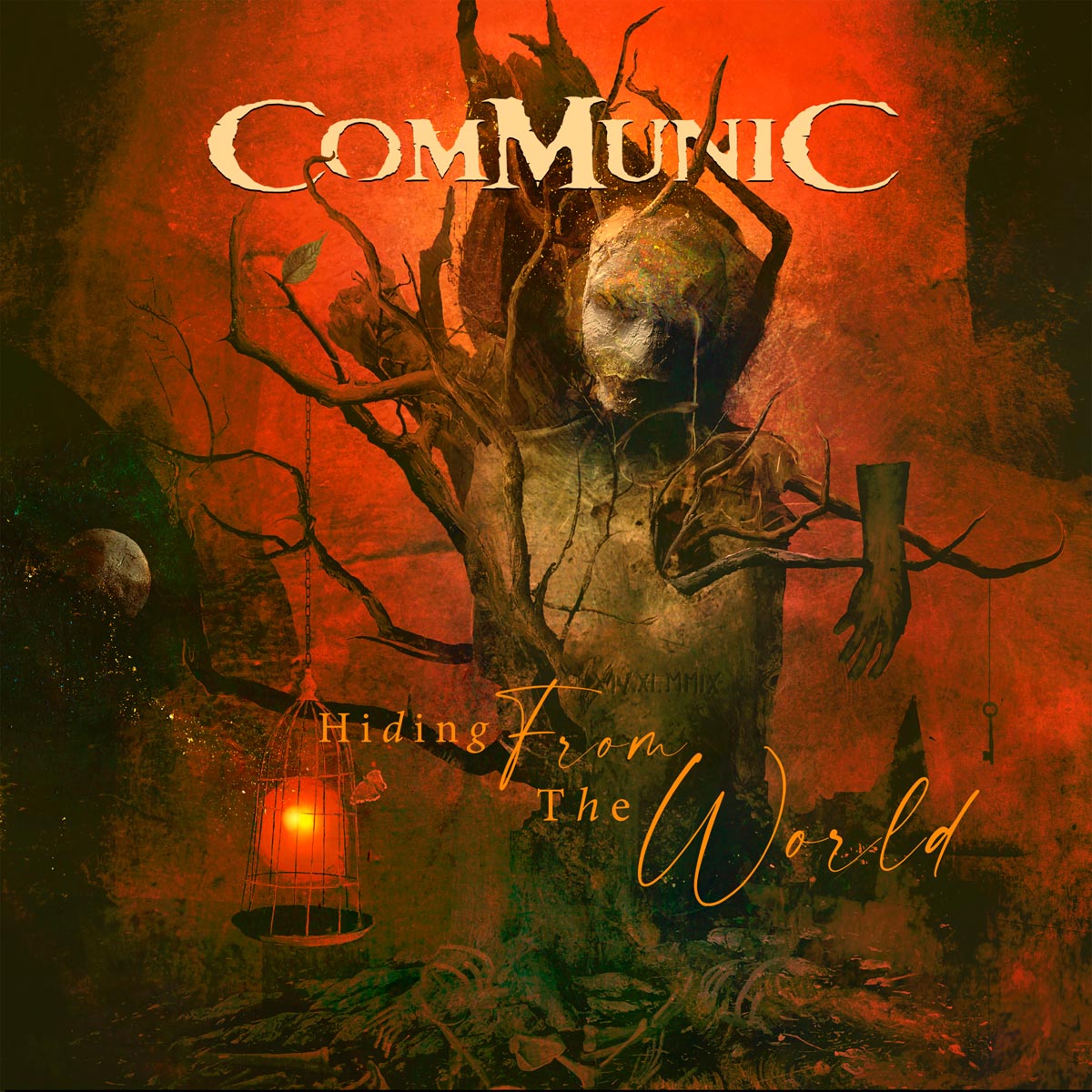 “Hiding From The World” Album Artwork

“As for the lyrics and overall theme I had in mind during the writing of these songs, is dealing with what we leave behind as a legacy when we die. I wrote these songs with a feeling inside that my life could end tomorrow, this could be the last thing I leave behind as my legacy. Tomorrow I could be crushed by a drunk phone-texting truck-driver on my way to pick up my kids at school. Life is unpredictable and we don’t know what will happen around next corner. Well that sounds really depressing, but that is where these songs are coming from and I think that feeling was captured throughout the songs and the stories on this album. And the artwork of Travis Smith just nails this feeling of hopelessness, overtaken by the earth and everything feels like it is out of reach or to overwhelming to comprehend, but still there is some trace of hope left. Maybe the most epic collections of songs that we ever have written! Now, the calendar says 2020, and it sounds almost like a science fiction movie from the 80’ties, but it is a fact. COMMUNIC survived since early 2003, and are still the same three members in the band today, as to the day the band was formed. That is something to be proud of. With COMMUNIC the Norwegian – no, the worldwide – metal scene still has an exciting and forward-looking name to remember.”

“Hiding from The World” was the first track we arranged and completed for the new album, and the song set the stone for much of the atmosphere and the mood on the album. It is a long song, moody, yet heavy with the dynamic build-up, tempo-changes and breakdowns we like to do. A story about a man on the edge of self-destruction, reaching out for help, but he seems like invincible to his surroundings, will anybody even notice if he disappear forever…. Hope you like it, it starts out slow, but goes heavy and deep and will take you on a journey, Cheers” – Oddleif

“Hiding From The World” Track-listing:

1. Plunder Of Thoughts
2. Hiding From The World
3. My Temple Of Pride
4. Face In The Crowd
5. Born Without A Heart
6. Scavengers Await
7. Soon To Be
8. Forgotten