Symphonic/Celtic vocalist LEAH – described affectionately by her fans as “the metal Enya” – recently announced the release of her upcoming full-length album, The Quest, out Friday, October 5. The album features a stronger Celtic and Fantasy connection in comparison to her previous release, Kings & Queens, as well as prog rock elements and ethereal ambiance, combined with traditional symphonic metal elements. The album is available for pre-order here.

Today, LEAH is pleased to reveal a new track from The Quest, entitled “Edge of Your Sword”. Check out the brand new lyric video below, along with some additional samples of more new music from The Quest.

LEAH says about the track: “This track was interesting to write… it was inspired by a mood, more than anything else – medieval rock vibes with a bit of spice. I hope those vibes get passed onto the listener! Some of that spice is attributed to Chen Balbus (Orphaned Land) who added the middle eastern saz on the track, which gave it a really cool and unexpected flavour! Also on the track is Barend Courbois (Blind Guardian) playing bass, Timo Somers (Delain) playing rhythm guitars (with an epic solo!), and Sander Zoer (ex-Delain) on Drums and percussion. Oliver Philipps (Everon, Phantasma) added a ton of orchestration which really beefed the whole sound up.

My part in it was composing the song, playing a lot of the keys, harps, synths, arrangements, lyrics, and of course vocals. I was actually scared out of my mind about that high note in the last chorus! I knew I could technically execute it, but was mentally blocked for some time about it. I had to do weird things in the vocal booth to overcome my vocal mental block, such as drawing an arrow pointing down on a piece of paper that I could look at, also using physical gestures when I went to sing it, such as pointing to the ground with my hands. The reason is because when you go to sing a high note, most singers tend to tense up and squeeze their vocal chords up, which make a horrible tone and tense up the voice. So, to overcome that default tendency, I had to convince my brain that I was actually singing lower and it would get easier, not harder. And when that note came out, it actually was a piece of cake! Amazing how the mind works!” 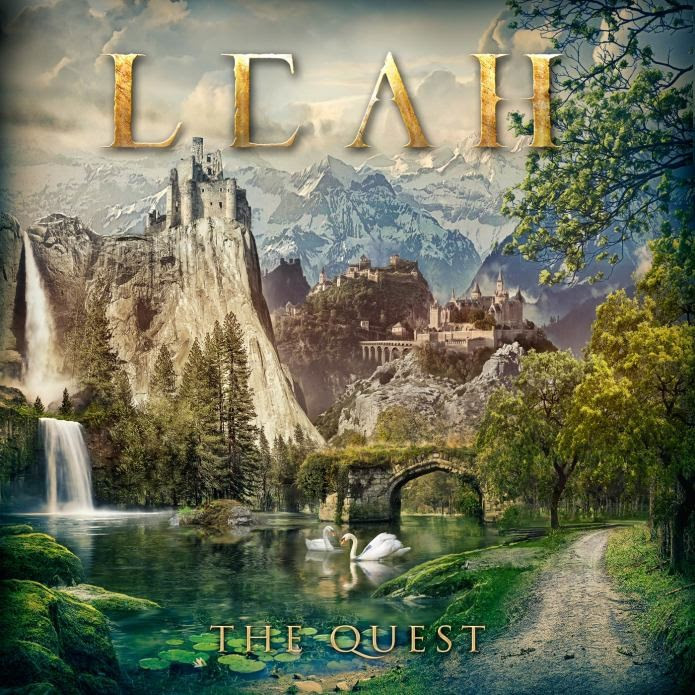 LEAH is recognized in the music world for her work with established heavy metal musicians such as Eric Peterson of Testament and Dragonlord, Timo Somers of Delain, Troy Donockly of Nightwish and many others.To date, LEAH has released three albums, Of Earth & Angels [2012], Otherworld [2013], and Kings & Queens [2015], as well as several viral videos. Her latest video features an ethereal cover of “The Dragonborn Comes“, the main theme from the massive video game Skyrim. The video has racked up 5.3 million views on Facebook and nearly 600,000 views on YouTube to date.

As mentioned in her comment above, in addition to LEAH‘s own vocals, keys, and orchestrations on The Quest, the album features an impressive international cast of guest musicians – including Troy Donockley of Nightwish on pipes and flutes, Barend Courbois of Blind Guardian on bass guitar, Timo Somers of Delain on rhythm and lead guitars, Sander Zoer formerly of Delain on drums and percussion and Chen Balbus of Orphaned Land on Middle Eastern Saz and Oud. The album features mixing and mastering from Jacob Hansen (Volbeat, Epica, Amaranthe), as well as orchestration, arrangement and production from Oliver Philipps (Everon, Phantasma, Delain).

“I am totally delighted to work with the guest musicians on this album. Each and every individual is an expert at what they do, and I only wanted the best for these songs, as we were developing toward a very specific sound, which was a rock/metal album with a Celtic and fantasy twist,” says LEAH. “This album was truly an international effort!”