Canadian heavy metal trio CAULDRON is currently streaming the song “No Longer,” which comes by way of the band’s forthcoming new full-length New Gods set to drop September 7th via The End Records in North America and Dissonance Productions in Europe. The band’s fifth full-length and follow up to the critically-lauded 2016 album In Ruin was captured by Chris Stringer (Timber Timbre, Wooden Sky) at Union Sound in Toronto and again promises a strong emphasis on songwriting and melody, complete with high-end organic production to match.

Founding vocalist/bassist Jason Decay says: “‘No Longer’ is a song that really came together and transformed into something unique with the melody. It is our first attempt at an acapella part and probably my favorite track on the record. Lyrically it’s pretty dark but out of that I think we got a pretty strong song.”

New Gods, the group’s fifth full-length studio record, once again promises a strong emphasis on songwriting and melody, complete with high-end organic production to match. “We have always prioritized songwriting above anything else. For me personally, I have always felt more confident writing than as a “musician” and for the first time I think we have found the production that best suits our songs,” says Decay.

CAULDRON was born from the ashes of GOAT HORN. After calling it a day in 2006, frontman Jason Decay wasted no time in putting together CAULDRON to continue with his heavy metal vision. Leaders among the new wave of traditional heavy metal, CAULDRON – which features Decay alongside Ian Chains (guitar) and Myles Deck (drums) – has since released two EPs with Into The Cauldron (2007) and Moonlight Desires (2014) as well as four full-length albums: Chained To The Nite (2009), Burning Fortune (2011), Tomorrow’s Lost (2012), and In Ruin (2016). The band has toured the world with the likes of MUNICIPAL WASTE, DEATH ANGEL, NEVERMORE, DIAMOND HEAD, ENFORCER, and in the summer of 2013, were invited to play METALLICA‘s Orion Fest in Detroit. Burning Fortune was nominated for a Juno award in 2012 while the video for the single “All Or Nothing” has received almost 600,000 views on Youtube/Vevo and was featured in the video game RockBand.

CAULDRON‘s New Gods will come available on CD, digital, and vinyl formats. For preorders go to this location. 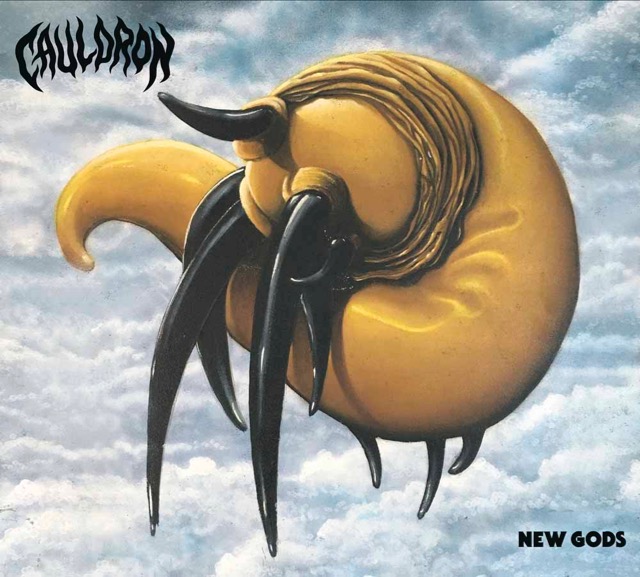 In conjunction with the release of New Gods, CAULDRON will be playing a handful of US shows in September with support provided by Barrow Wight. The band has also confirmed a special record release show in their hometown of Toronto set for September 15th at Junction City Music Hall. Click here for more show and ticket info.