Caligula’s Horse, a band at the forefront of Australia’s progressive rock scene, are pleased to announce their first ever North American headline tour for 2020, following their one-off appearance at ProgPower USA this year, as part of the Latin American ‘In Contact’ Tour. The band will bring their now trademark energetic live show to North American audiences, hitting the road with Long Island heavy rock juggernaut Moon Tooth, as well as fellow countrymen prog prodigies Ebonivory.

With their immense US cult following continuously begging for almost a decade, the internet will now surely break; Caligula’s Horse are finally making their way to the United States & Canada for an unforgettable debut full length tour.

Vocalist Jim Grey comments: “We’re more than thrilled to be finally taking our first journey across the USA. It’s been a very long time coming, so we’re planning on bringing a real mix of old and new for our US fans who’ve been supporting us from the very beginning. It really is a bucket list moment for us – we can’t wait to meet you all!”

You can find the full list of dates below and buy your tickets at caligulashorse.com/tour 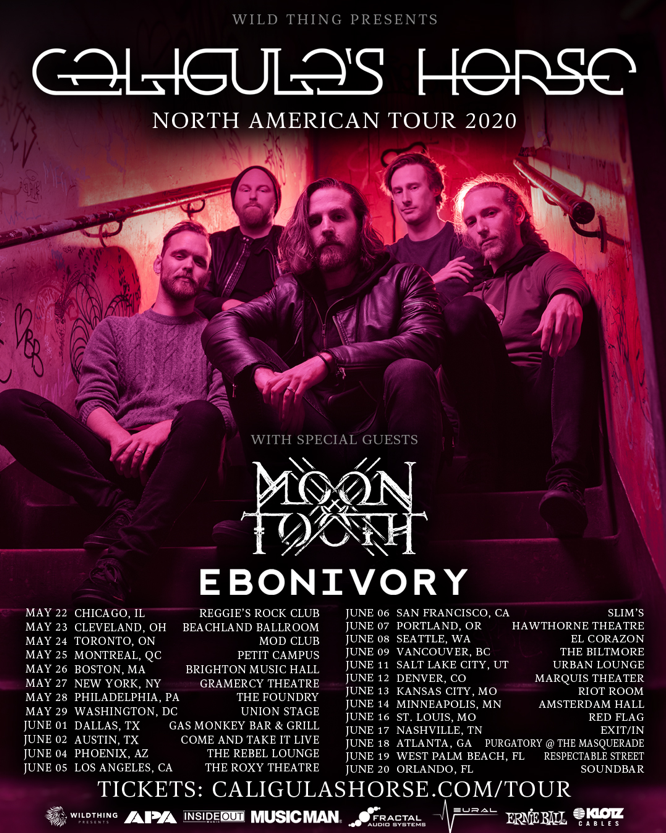 Hailing from Brisbane, Australia, Caligula’s Horse is a progressive alternative rock powerhouse. Their unique tapestry of progressive metal laced with raw rock power is at once fluid, monumental, and striking, offering a wide audience a broad palate of unforgettable moments and timeless music.  Now established as one of Australia’s finest live acts, with four well-loved albums under their belt, and a passionate and ever-growing worldwide fanbase, Caligula’s Horse have been broadening their horizons to the rest of the globe. Following touring with such luminaries of the international progressive heavy landscape as Opeth, Mastodon, TesseracT, The Dillinger Escape Plan, Anathema, Protest The Hero, Twelve Foot Ninja, and Ne Obliviscaris, and countless successful tours of Australia, New Zealand, Europe, and recently Latin America, it’s now the time for North America to experience Caligula’s Horse at the peak of their powers.

Joining them will be Long Island’s Moon Tooth, who released their latest album “Crux” in 2019, working alongside Lamb of God’s Mark Morton and renowned producer Machine (Clutch, King Crimson, Every Time I Die), and touring in support of that record with the likes of Animals As Leaders & The Contortionist. They also received their first Billboard chart positions: #13 Heatseekers, #23 Hard Music, #42 Indie Label, #62 Digital Albums, with Pitchfork saying calling it “pure cosmic wonder”.

Hailing from Ballarat in rural Victoria, Australia, Ebonivory will also be touring North America for the very first time, bringing their engaging mosaic of raw emotion, complex rhythmic devices and prismatic melody. 2019 saw the band going from strength to strength, performing at PROGFEST in Australia alongside The Ocean, Monuments & Skyharbor, followed by Australian tours with Dead Letter Circus & Circles, and releasing their acclaimed single “Patting The Black Dog” which garnered coverage from the likes of Prog Magazine, Triple J Radio, Rage ABC TV, and prominent playlist features on Spotify. This was followed by the release of the track “Tales of Termina”, which received similarly effusive coverage.