“Pioneer,” an adjective to be used carefully. Many wish they were, most are not. DIAMOND HEAD – the Stourbridge, England-born New Wave Of British Heavy Metal pioneers – return to the world stage with a new album. The Coffin Train is at once fresh and exuberant while also being a stone-cold classic slice of old-school heavy metal excellence. Is it packed with the sort of riff-fueled power that founding member (and riff lord) Brian Tatler led a genre and influenced the odd band or two with? It’s electric for sure… and then some.

Formed in 1976 under the riff-rolling leadership of guitarist Brian Tatler, DIAMOND HEAD would quickly establish themselves as a vanguard of the exploding New Wave Of British Heavy Metal scene. With their genre-defining debut album Lightning To The Nations, DIAMOND HEAD became the band who influenced and opened gates for many metal bands.

The album’s lead single, “Belly Of The Beast,” is a ripping signal of intent with huge, catchy, crunchy riffs coupled with Rasmus Bom Andersen‘s fiery vocals and married to a steam-engine old-school tempo which will have headbangers gleefully reaching for their air guitars and aspirin. It is both furious and thickly intense. 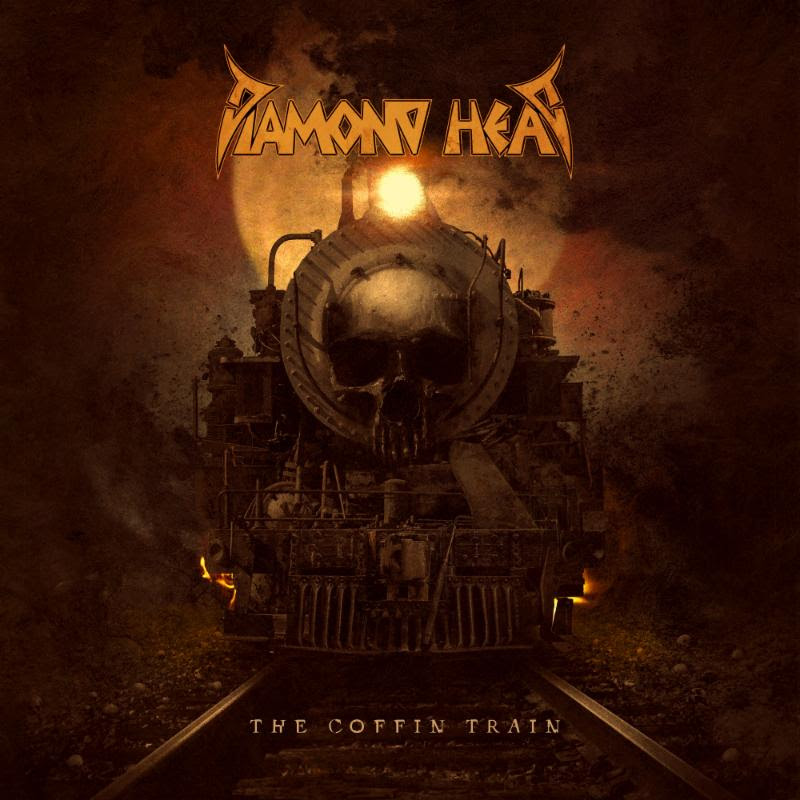 Remarks Tatler: “‘Belly Of The Beast’ is the lead track on the album and the first single. This is classic DIAMOND HEAD, bringing to mind songs like ‘Helpless’ and ‘The Prince.’ It’s a very exciting song to play and really pumps up your adrenaline. It’s in your face the whole way through.” Andersen adds, “It’s a song about personal demons; everyone carries at least one through their life. Don’t be hasty to judge people, for we all have a battle inside.”

“All along we wanted to make sure we didn’t lose sight of what we call ‘The Brief,'” explains Tatler, “I would never want to deny our NWOBHM style and sound, that’s what originally got me excited and DIAMOND HEAD noticed. And I still enjoy the creative journey we go on.”

The Coffin Train, DIAMOND HEAD‘s eighth studio album, is a glorious testimony to Brian Tatler and Rasmus Bom Andersens‘ masterful ability to create the flavors necessary for prime DIAMOND HEAD music. “Rasmus is a big part of why the album, and band, sound like we do,” affirms Tatler. “He has a fantastic vocal range, knows exactly what to do with his voice and is incredibly knowledgeable about it!”

When it comes to the concepts behind The Coffin Train, Tatler left the heart to Ras, who being a thinker and life-conceptualizer, doesn’t lack sources of inspiration. DIAMOND HEAD have not only managed to create an album of pure heavy metal intensity, they have created a timeless aural statement which feels destined to see them delivering both The Coffin Train and DH 2.0 to more fans than ever.

The Coffin Train will be released via Silver Lining Music May 24th. Preorders will be available Friday March 8th.

DIAMOND HEAD will be touring Europe for most of 2019 and are confirmed on the lineup of two very special UK shows with NWOBHM giants, Saxon, which will take place on October 19th at the iconic Hammersmith in London and October 20th at the O2 Apollo in Manchester.