The band is on tour in support of their recently released album Age of Unreason (May 3).  The critically acclaimed record offers a fiery and intensely relevant musical response to the times and “Given the political madness that seems to have gripped the world these days, Bad Religion is as relevant as ever.” says Kerrang! There is a stylistic consistency to the band’s iconic and influential sound – hard fast beats, big hooks, and rousing choruses, yet each new song remains distinctive, utilizing composition, melody, and lyrics to deliver a unique narrative consistent with the band’s longstanding humanist worldview.

The songs on Age Of Unreason are both furious and meticulously crafted. There are references to contemporary events; racist rallies, Trump‘s election, the erosion of the middle class, Colin Kaepernick‘s protest, alternative facts, conspiracy theories, and there are homages to the literary and philosophical works that have long inspired the band. Age Of Unreason is BAD RELIGION‘s 17th studio album and was co-produced by Carlos de la Garza.

Bad Religion will be making the following appearances throughout the fall, stay tuned for added dates: 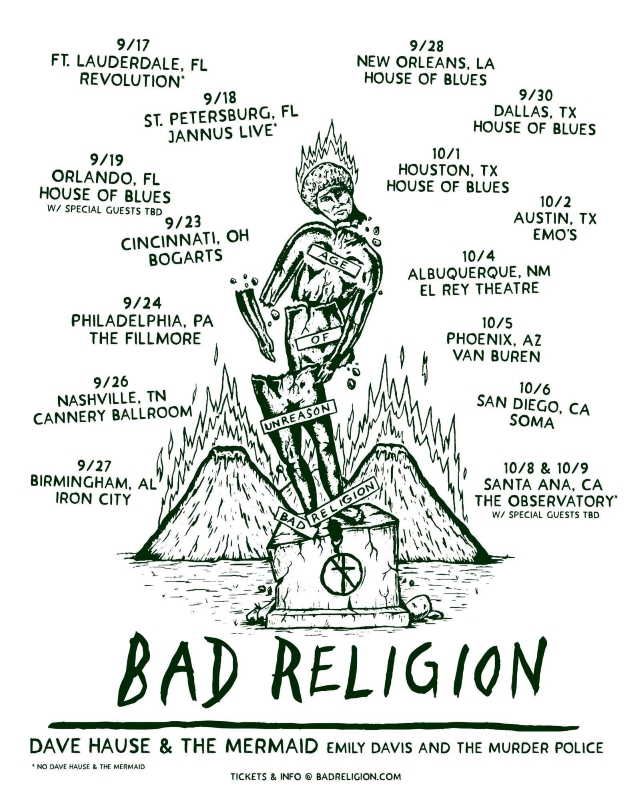