Exactly 20 years ago today, renowned dutch multi-instrumentalist Arjen Lucassen released his universally lauded Into the Electric Castle album, and a 20th anniversary edition of the album has just been announced by Mascot Label Group, following the release on vinyl of his two previous albums The Final Experiment and Actual Fantasy (Revisited). Original vinyl copies of Into The Electric Castle are fetching a small fortune, and it is by far one of the most requested titles for a vinyl release by Arjen‘s followers.

For this release Lucassen re-mixed the audio to 21st century standards. He made it clear that it’s a ‘remix’, not a ‘remaster’, saying “Remastering takes 2 hours, this remix took me 2 months! We start off with the collector’s item to end all collector’s items. This is one of the coolest items we have ever released: A box set of Into The Electric Castle with a 3D-sculpture of the cover, 4 CDs, 1 DVD and 3 LPs on exclusive gold marbled vinyl. The gold marbled vinyl will be only available in this box, and won’t be available separately”

The 20th Anniversary Limited Edition Box Set will be available to pre-order between July 19 and August 6. After August 6 Mascot Label Group will print a maximum of 1500 copies, depending on the amount of pre-orders they receive. Production time will be longer than the regular vinyl and the 5-disc Earbook, therefore all who order this box set together with other items, will get their complete orders around the end of November.

The label is also releasing another Earbook, which will fit nicely on your shelf next to the ones of The Source and Ayreon Universe. The 20th Anniversary Earbook contains: 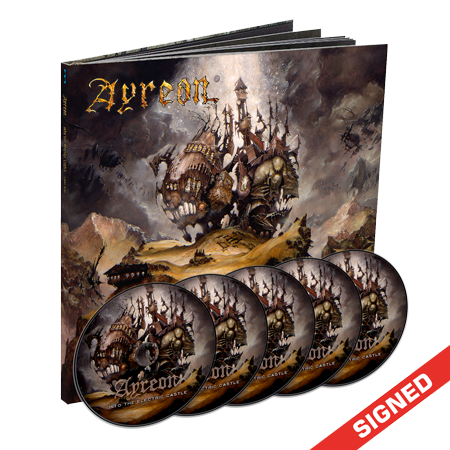 And of course, there will be the usual black vinyl edition as well:

Will you be ordering any of these? Let us know in the comments below!