For the first time ever, Sully Erna and Aaron Lewis, two of the most acclaimed front-men in rock–the voices of multi-platinum rock bands Godsmack and Staind–will perform their hits together, side-by-side, in an intimate and unplugged evening on The American Drive-In Tour, kicking off in October. It’s one of the first 2020 drive-in live rock concert tours planned across multiple cities, and promises a once-in-a-lifetime event for fans, featuring a special evening of hits, covers and conversation with Aaron and Sully appearing together on stage.

Godsmack’s Sully Erna said, “Me and Aaron Lewis? Onstage together…acoustic? Do I need to say more? Just don’t miss it! It may never happen again.”

“Sully and I have been friends for 25 years. We’ve been talking about doing something for the last 10 years,” said Staind’s Aaron Lewis. “The time has finally come. I couldn’t be more excited to be bringing this to you in such strange times.”

Erna is the accomplished founder, vocalist, guitarist and songwriter for the multiplatinum rock band Godsmack, selling over 20 million records worldwide, enjoying four Grammy nominations and eleven #1 singles at mainstream rock radio. In May, Godsmack’s “Unforgettable” became the fourth #1 rock track from their latest album “When Legends Rise” (BMG). This accomplishment makes Godsmack one of only four rock acts to reach this milestone. Erna also released his latest solo album “Hometown Life” in 2016.

Lewis, who fronts and founded the wildly-successful rock group Staind, has sold 17 million albums worldwide and has enjoyed four consecutive top three debuts on Billboard’s Top 200. The single “It’s Been Awhile,” remains the most-played rock song of its decade. His solo material includes the platinum selling hit “Country Boy” and 4 albums of tried-and-true, twang-heavy Outlaw Country tunes, including his most recent album, “State I’m In.”

Tour producers Danny Wimmer Presents have worked closely with both artists and all venues to create a live concert environment that will bring rock fans back together in unique setups that promote social distancing for a safe experience. The show will feature a barrage of hits, covers, conversation and laughs that will create a true sense of unity for audiences across the country.

“We’re eager to get back to what we love, and we’re determined to keep the music alive and keep the rock community strong during these times,” comments DWP President Joe Litvag. “Aaron and Sully on stage together like this is something that none of us have seen before but have always hoped would happen one day. We’re thrilled to be a part of it.”

The nationwide trek will follow current local health guidelines for fans’ safety and enjoyment. Some shows will be drive-in events with patrons in or adjacent to their cars, and other shows will feature viewing from socially distanced fan “pods” or tables designed for up to four people.

Tickets for these unique performances go on sale beginning this Tuesday, September 15 at Noon local time at www.aaronandsully.com.  More dates will be announced in the coming weeks. 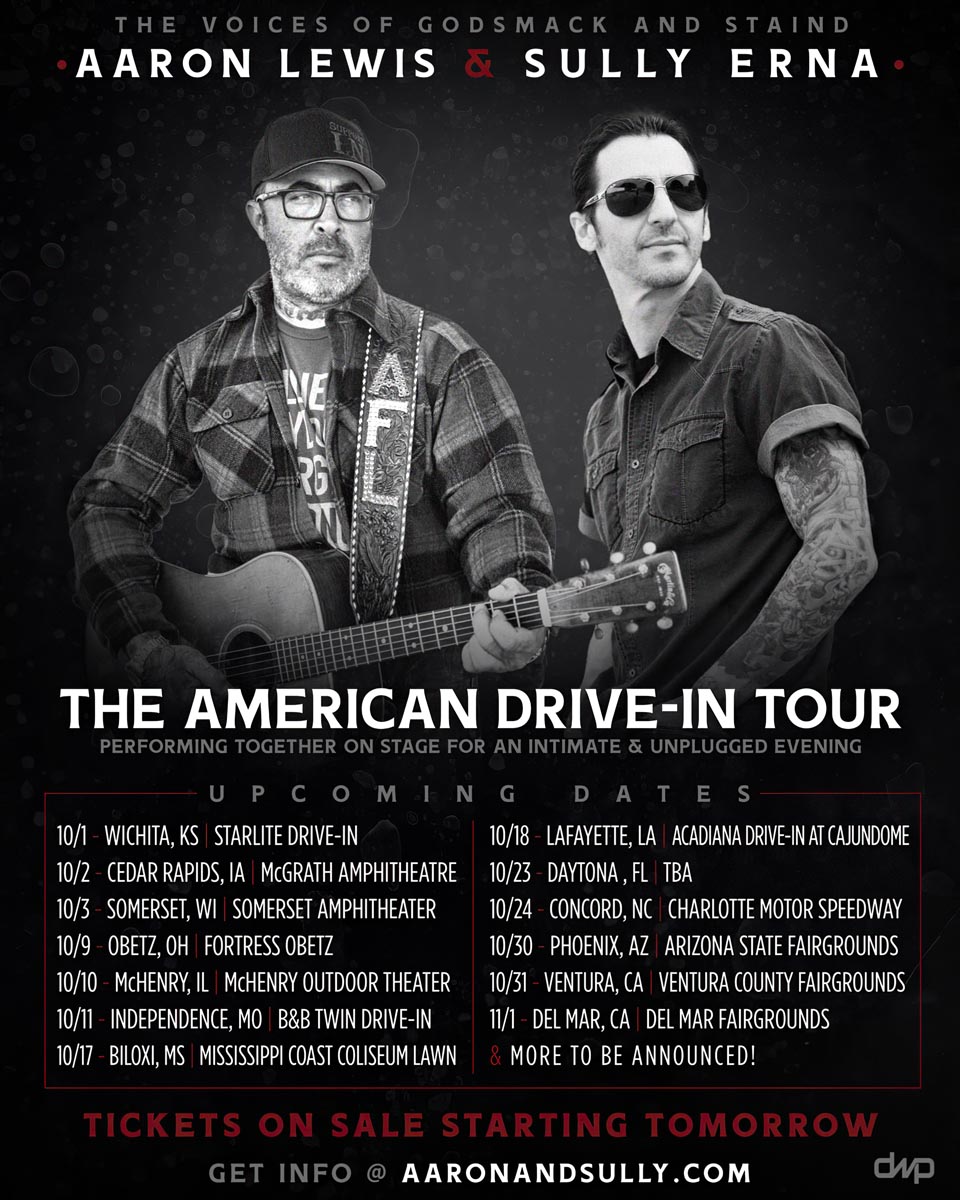 The American Drive-In Tour initial dates are as follows:

Details subject to change based on local guidelines. Events are rain or shine.

*Socially distanced drive-in, up to four patrons per vehicle

**Socially distanced pod, up to four patrons per pod

****Socially distanced tables, up to eight patrons per table